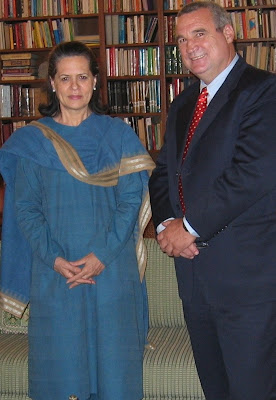 Sonia on the left, and a clean-shaven Bob on the right

"Life is meeting," wrote Sir John Hunt. When you work for a major humanitarian organisation, you get opportunities to meet famous people. Some you remember vividly, others you forget. The four that stand out in my mind are Indira Gandhi, Bill Clinton, Sonia Gandhi and President Karzi, President of Afghanistan.

I met Bill Clinton in Ahmedabad, India after the huge earthquake that affected Gujarat. He was in a very relaxed mood when he joined a group of us to discuss how his new organisation could help the affected people. His inquiring mind, pithy questions and ability to quickly distill the key facts from a barrage of people trying to impress him, were the qualities I remember.

Purely by chance, I met Indira Gandhi in March 1975, as a young man en route to Nepal from Vietnam. I had a 24 hour stop in Delhi and sadly, Padmaji Naidu died just before my arrival. She had been a mentor to Indira Gandhi and had a huge influence on her life. As Padmaji was President of the Indian Red Cross, Indira wanted someone from the Geneva headquarters to attend. As I was coincidentally passing through Delhi, I was met and whisked away to buy white clothing, the colour for mourning in India. A few hours later I arrived at the funeral service and Indira Gandhi took me by the hand, thanked me for coming, and I was next to her throughout the ceremony.

Sonia Gandhi was different from her Mother in Law. More reserved and part of a dynasty which has fascinated India and the world for over 75 years. I met her on the 10th of May 2005.

It was with a sense of awe I waited with my colleagues in the ante-chamber that had photos of Sonia's late husband Rajiv Gandhi, his Mother Indira, and her father Nehru. There was a touching family photo of Sanjay and Rajeev Gandhi wearing shorts with their Mother Indira, and Grandfather Nehru. The only photo that was not part of the dynasty, but a key figure in Indian history, Mahatma Gandhi.

We were invited into a huge library and this very attractive lady, immaculately dressed in a blue Shalwar, warmly welcomed us. Books lined every wall and there were four large models of sailing ships on top of the book shelves. I recognised one as an "East Indiaman" which carried tea from India to Great Britain. My good friend Murli Deora, the then Vice President of the Indian Red Cross and now Minister of Petroleum, told her about the extensive work the Red Cross had done for those affected by the earthquake in Gujarat some years earlier, and the work we were doing then for the victims of the Tsunami. She showed deep knowledge of the Red Cross. After a group discussion with her, I had a one to one talk with her about the work her daughter was doing with a young Afghan friend of mine, for slum dwellers in Delhi. She smiled, as only a mother can, with pride, when hearing about her daughter. She came cross as caring, deeply concerned and warm.

I met her daughter Priyanka twice. She is a remarkably strong and focussed young women. We were discussing ways she could help promote the work of the Red Cross in South Asia.

Hamed Kazai, President of Afghanistan is another man that leaves a strong impression on you. I met him in mid 2003 in Kabul. A humble man with a huge responsibility on his shoulders as he tries to bring some semblance of stability to a war-torn country. Tall, handsome, dignified and sharp, he speaks with conviction and clarity on the future of his country.
Posted by Bob McKerrow - Wayfarer at 18:40