A wedding, a worn path, tea plantations and a fresh snowfall.

Fresh snowfall on the Dhaula Dar mountains on Monday night 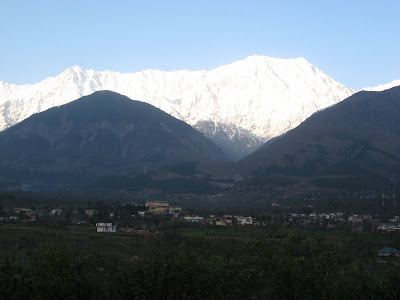 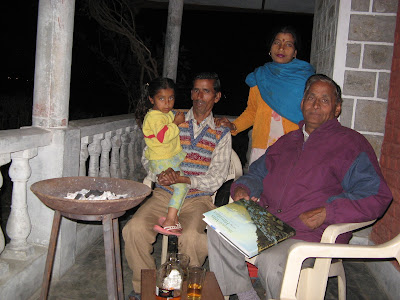 The path through the village 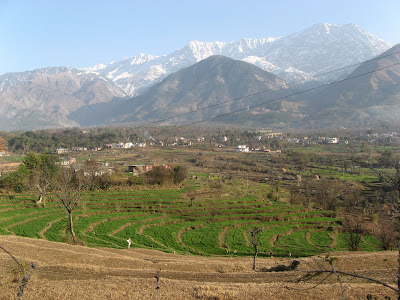 The wedding band in the main street of Sidhbari 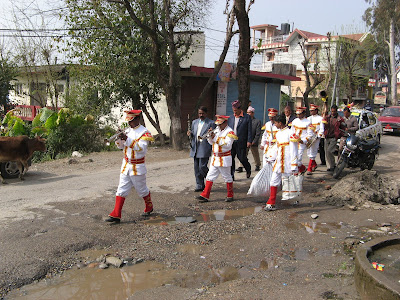 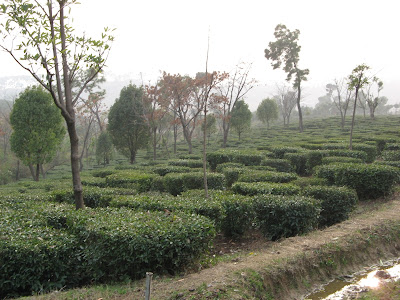 After a trip to Chamba and Parvati valleys, I felt like a day off. So on Tuesday, I told Rikhy Ram, to give me some space. Space in India ? No, I am now part of his family and Sidhbari village and Rikhy insisted I come. So I walked the 2 km across the worn path through wheat fields (see photo) and small house with the Dhaula Dhar mountains towering above.

Loud music led me to where the wedding was being held. I met the charming Colonel and his beaming wife whose daughter was getting married. It started with the local band leading the bride and groom in a car through the main street of Sidhbari. Every shopkeeper, woman, man, child, dog and cow in the village turned out to watch this grand affair. I wonder how many married women who lined the street were thinking, “foolish girl, she doesn’t understand what is ahead of her.” Life for a married woman in the hills of India is a hard life where the husband is King and the women seem to do most of the work.

After the wedding procession and the vows, it was time to tuck into a great feast of Indian food, all vegetarian.

It soon turned cold, “ It will be snowing in the mountains.” said Rikhy looking knowingly at swirling dark clouds. After the wedding I took Rikhy to a local internet café to show him Google Earth. Rikhy, who worked most of his life in military intelligence and worked in Pakistan (undercover spy) for two years, Bhutan, Chinese border with India, gathering intelligence and filling in blanks on the map, at 72 years of age, had begged me to show him the latest satellite imagery. Within a minute I had Rikhy glued to the computer screen as he named remote places and I zoomed in on Google Earth and he could see every spur, path, peak, nullah (creek) on the map. He was dumbfounded. “ I spent almost my whole military life getting information like this, and now we can just sit here and see all this detail,” he exclaimed excitedly.

As we came out onto the main road, the cloud was lifting, and there before us was the freshly blanketd mountains looking so pure and majestic.(see photo)

We visited the local tea plantation in Palampur keeping one eye on the sparkling Himalaya as we drove.

That night, my last in Sidhbari, we lit a charcoal fire on the brazier, and sat on the balcony with Rikhy, Gurbachan (watchman) his wife Rekha, and children Aanchal and Mushkaan. As the embers reddened, I looked across to the Himalaya sparkling in the dark and I reflected on 11 days in Himachal Pradesh. A dream had come true. When I first visited the Himalaya in 1972 and I travelled to the hill stations of Darjeeling, Kalimpong and Gangtok, I wanted to see more of this vast mountain range. In 1975 I lived a year in Nepal and travelled from east to west in my work and holidays seeing most of the high Himalayan peaks. Then after years of working in Afghanistan, Pakistan and Central Asia, I was able to see and connect the Tienshan, Pamirs, Hindu Kush, and Karakoram to the Himalayan ranges.

Since 2003, I became obsessed with the valleys of Himachal Pradesh and I wanted to understand and connect in my mind, the lesser Himalayan ranges the Pir Panjal and Dhaula Dar.

The reddening coals could see my happiness as Rikhy and I toasted to our trip next year, planned to the remotest valley of them all, the Pagi valley, right under the Pir Panjal.. As I age, I prefer dreams to memories. I always need to have that last valley to visit. That is the essence of my life.

Across the last blue mountain barred with snow
Across the angry and glimmering sea
Posted by Bob McKerrow - Wayfarer at 20:40

What a wonderful place, you are visiting! Amazing pictures...thanks for sharing your great trip with us.

Thanks Maki for your nice comments.

It has been a great journey to date, but still more exciting things to do.