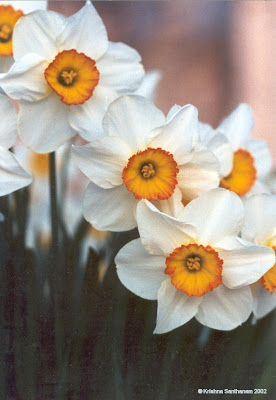 I arrived in Christchurch about 24 hours ago. After a long flight from Jakarta to Singapore, another flight from Singapore to New Zealand, I was so excited to see the coastline of the South Island just south of Hokitika as we reached New Zealand about 8.45 am yesterday morning. Then a few minutes later I was greeted by a view from 7000 metres of the white, spiny mountainous backbone of New Zealand, the unsurpassable Southern Alps. Misty on its verdant western slopes, then rearing out of the cloud, were Aoraki Mt. Cook, Tasman, Sefton, La Perouse, Torres, Douglas and Eli de Beaumont, and closer still. I could pick out a cluster of peaks that looked like Mt. Evans and Red Lion Peak at the head of the Waitaha valley, all places of my adventurous youth. What a greeting ! Then we soared over the peaks of the Arthurs Pass region and then dropped altitude to the snowy foothills ringing the Canterbury plains. The plane banked and turned over the Pacific Ocean and lined itself up for a safe landing in Christchurch. 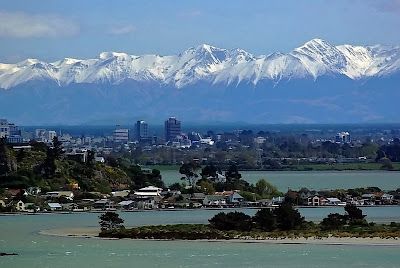 Christchurch was every bit as beautiful as I remember it when I was lasy here almost 2 years ago.

On reaching my home in Bryndwr, Diva, my daughter’s Chocolate Labrador was so excited to meet me. I walked around the house and noticed the Kowhai tree had grown, as had the various tussocks, ferns and scrubs. Then, I a saw a host of yellow daffodils in a sunny spot at the rear of my garden, beneath the apple vines. Daffodils in mid July ? I looked up and saw camellias flowering on the tree. Following the cold spell there have been a few hot days and these hardy daffodils have raised their heads for my arrival. Being greeted by a dog, daffodils, camellias and trees was a stirring welcome. I strolled over to the vege garden and only rhubarb and parsley were to be seen.

I took Diva for a walk in the park enjoying the warm winter sun then I called three of my daughters living in New Zealand. Ruia was the first. She works as a district nurse in Christchurch and was visiting her caseload of acute patients in their homes. “ I’ll be home at five Dad and can you check the corned beef which is slowly cooking in a crook pot.”

Aroha called a few minutes later. She is a fashion designer here in Christchurch too. “ I finish work at 4.30 p.m so I will jog over to see you round 6 p.m.” dhre said. Jogging is her transportation. She thought nothing of an 8 km run to see her Dad.

Tania and Al arrived by bus from Timaru They run an outdoor education centre near Whakatane called Kahunui, designed to give high school students in Auckland, a taste of the great New Zealand outdoors, by running 28 day courses.

I later called Anita my eldest who lives in Timaru. She and her partner Jonts have just bought a new house in Timaru where they live with their three boys between four and a half months and five. I am heading down there early next week and am so excited about seeing my grandchildren, the youngest Billy, for the first time.

The first to arrive home was Ruia on her bike, then Aroha jogged in and later Al and Tania by bus. I hugged each one by one as they arrived and thought how lucky I am to have five daughters in New Zealand. God has blessed me richly.

The corned beef, potatoes and huge pot of veges tasted superb, accompanied by a tasty Cabernet Sauvignon. The only one I couldn’t contact, was Kira who works as a jeweller in Wellington. I spoke to her last weekend from Jakarta and will call her today.

We talked through the night into the early hours of the morning catching up on all the news.

Today it will be visits to bookshops, outdoor clothing shops for warm clothes, a mountain bike trip and a family dinner in the evening.
Posted by Bob McKerrow - Wayfarer at 13:55

Email ThisBlogThis!Share to TwitterShare to FacebookShare to Pinterest
Labels: Daffodils in Christchurch

Welcome in beautiful Christchurch.
Yes I saw lots of daffodils yesterday in Hagley park. We were too early at the hospital were my son had a check up so we had a walk through the park.
Lovely to learn about all your family. Sounds you are having a great time.

Haere mae Bob!
I think the mountains are happy to see you as well as your large brood. I hope you have a lovely visit home. I am in the Ruahine for six days from next Tuesday, wish we could catch up Bob. Hopefully one day. Kia ora.
Robb

Thanks for your warm welcom. It was so beautiful yesterday seeing flowers trees and family.

Toiday did some shopping and a big family dinner tonight. It would be nice to see you sometime.

I think the mountains are happy to have an old admirer back. My daughters are also enjoying seeing their wayfarer Father back for a few weeks, and I am enjoying their warm laughter and company. Have a great trip into the Ruahines and tred lightly my brother.