The province of Aceh - Indonesia

I am currently travelling in the northern most part of Indonesia, Pulau Weh ( the small island in the top left-hand corner) and the province of Aceh, which was devastated by the 26 December 2004, Tsunami which killed 127,000 people and the bodies of another 116,000 have never been found. A quarter of a million poeple killed in seconds. In my travels where I talk and motivate the volunteers and staff, inspect projects and plan for future programmes, I hear so many gut-wrenching stories and the work of unsung heroes, many of them Red Cross volunteers.

Here are two stories of Nuraini a Grandmother and Nasir, orphaned by the tsunami. 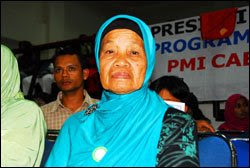 After losing four children, 11 grandchildren and her home to the 2004 tsunami, 72-year-old Nuraini and her husband used their pension to build a kindergarten in Merduati village, Banda Aceh. “Children should begin their education early, which is why we started this kindergarten,” she says.

When she is not running after the children at her school, Nuraini teaches cooking and traditional handicrafts to other women in her village as a community facilitator for a psychological support programme (PSP) run by the American Red Cross and Indonesian Red Cross.


“It is important to share your knowledge and skills with others, so that they can grow and learn too,” she says, adding that many women use these new skills to earn additional income for their families. Nuraini also sheepishly admits that she has a hard time sitting still and is constantly looking for new projects to keep her busy.

Nuraini is one of 1,260 community and school PSP facilitators in the 137 communities and 154 schools in Banda Aceh, Aceh Besar and Aceh Jaya targeted by the programme. Nuraini and her fellow volunteer facilitators play a critical role in helping their communities to recover from the emotional toll of the tsunami.

The volunteers identify psychosocial needs in their communities, and design and implement activities to meet these needs. These often include informal schooling and tree planting to help re-establish a sense of place in damaged or resettled communities. Facilitators receive extensive training in project planning and technical skills, such as psychosocial first aid, to help them carry out their roles.

“Facilitators in Banda Aceh began to provide support to their communities right after the tsunami hit, even though many of them had lost family members and their homes,” said Amin Khoja, the American Red Cross PSP programme manager. “Their contribution to this programme and to their community is noble and deserves appreciation.”

As the PSP programme comes to an end in Banda Aceh and Aceh Besar, the American Red Cross and PMI are working with the facilitators to enable them to continue to provide psychosocial support to those in need. The Red Cross Red Crescent is now expanding its PSP activities into new communities in Aceh Jaya. 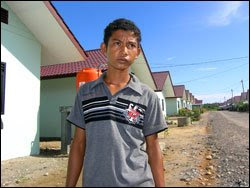 Nasir (left) found himself in the media spotlight in December 2007, when he became the recipient of the 100,000th house built in Aceh province three years after the tsunami had left around half a million people homeless.

The 14-year-old orphan was interviewed on local television at the ceremony to hand over the keys to his new pale green home in Tanoh Manyang village in the Teunom region of western Aceh.

He may be the star of the community but, a few months on, the media circus has moved on and he’s still facing life without his parents, who died in the disaster.

“After the earthquake, I went closer to the beach. Then I saw a big wave that dragged me away. Although I was only half conscious, I was able to swim, but I never saw my parents again,” he explains haltingly.

Nasir now lives with his older sister in a settlement of 140 houses, which were constructed from scratch by the British Red Cross for tsunami survivors who lost their land in the disaster. Some of them had previously inhabited a tiny island in the middle of an estuary, which was swallowed by up the waves.

Today there is a lively coffee shop and brightly-coloured flowers grow in the front yards lining the main street. People are slowly furnishing their new homes, although few have enough money to replace everything they lost in the disaster.

Nasir must wait until he reaches the age of 17 before he becomes the legal owner of his house. Until then, his financial affairs will be managed by Nourdin, his uncle, who has been declared Nasir’s official guardian by the local sharia court.

There, Nourdin signed a declaration confirming his responsibility to manage the assets given to his nephew by the British Red Cross until Nasir becomes an adult. The same process was repeated for the 348 orphans who received homes and cash grants under the Red Cross policy of providing extra support to groups left particularly vulnerable by the tsunami.

Nasir recently received a lump sum payment of around 520 Swiss francs to help with his education. Some of the money has been spent on books, pens and other stationery, and he has also enjoyed a bit of extra pocket money.

Thanks to the International Federation of Red Cross and Red Crescent Societies for use of photos and information above.
Posted by Bob McKerrow - Wayfarer at 02:42

This is indeed a glowing report. Humanity rose still blooms among the survivors of the tsunami of 2004. There are not enough words to express the awesome work the Red Cross and its affiliate members continue to do for victims of tragedy.

Well written report. Quite informative and I welcome the map for it enhanced my visual understanding of those far away places where you do your humanitarian work.

Thanks Paterika for your feedback. I am sitting in Meadn airportm capital of North Sumatra, waiting for a flight back to Jakarta. I have been in Aceh for five days and last night in Calang, we received 12 hours of torrential rain. The whole area was flooded this morning but the 2000 plus houses we have built were all above the waters and strong and resilient. Many of the remaining traditional houses were totally awash. The work goes on......

You can find out more about the British Red Cross tsunami recovery building work at:

Thanks for the information. Thanks

My point of view partially coincided with yours. Thank you for trying. antidepressants Read a useful article about tramadol tramadol

The article was very interesting and informative for me. weight loss Read a useful article about tramadol tramadol

Hi there! Would you mind if I share your blog with my
zynga group? There's a lot of people that I think would really enjoy your content. Please let me know. Thank you

You are a very smart person!

Here is my web blog; http://www.novobr.com/user_detail.php?U=acllester