I spent last week in the Tsunami affected areas of Aceh, Indonesia, where the Red Cross is nearing the end of its Tsunami recovery operation. As I travel about inspecting the work we have done, I hear so many stories from Tsunami survivors. Here are a few of them. 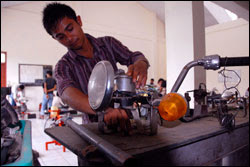 Four years after the disaster, Masrizal and Bahtiar are looking to the future. Along with nearly 500 other young people, Bahtiar is participating in a vocational training programme provided by the American Red Cross and the Indonesian Red Cross

Masrizal is a sensitive and quiet young man. At age 27, he has a strong vision and a desire to enrich himself and help others. But beneath his stoic demeanor lies a moving story of tragic loss and new beginnings.When the December 2004 tsunami struck, Masrizal lost his entire family, his home and all of his earthly possessions in a matter of hours. His village of Lamlumpu, in Aceh Besar, was utterly destroyed and many of its residents killed.“My parents and siblings disappeared in the waves, together with most of the other people who lived in my village,” he says. “It left me all alone in the world.”

But Masrizal says the experience made him more compassionate and concerned about the well-being of those around him. He says he often thinks of his mother and tries to emulate her. He remembers her as a warm and lively woman who was at the centre of community life.“My mother was always involved in community events,” he says. “She was easy to talk to and I felt like I could tell her anything.”More than a year ago, he received a new house from an international organization near where most of Lampulu's surviving residents have settled. He has also found a job at a local blood testing laboratory, where he works part time.

Like Masrizal, 20-year-old Bahtiar also lost nearly everything to the tsunami. Caught up in the waves, he was badly injured but luckily managed to survive. Unfortunately, both of his parents and five of his siblings did not.“There was nothing left from our home - it disappeared completely,” Bahtiar, who was aged 16 at the time, recalls. “I felt sad and confused, but thankfully I had my relatives to care for me during that time.”His surviving family members helped nurse him back to health and supported him while he completed secondary school.

Four years after the disaster, Masrizal and Bahtiar are looking to the future. Along with nearly 500 other young people, Masrizal is participating in a vocational training programme provided by the American Red Cross and the Indonesian Red Cross (PMI). The training, which is part of the psychosocial support programme, aims to help tsunami-affected youth like Masrizal to gain the skills they need to earn a sustainable income.“We are allowed to choose the type of training based on experience and interest,” Masrizal says. “Once I complete the course, I hope to earn more money and establish my own business.”Participants can choose from a range of courses, including carpentry and computer skills. 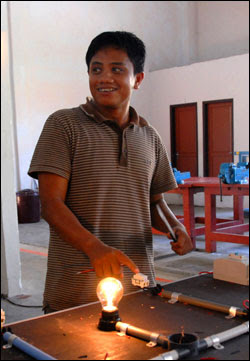 The training, which is part of the psychosocial support programme, aims to help tsunami-affected youth like Masrizal to gain the skills they need to earn a sustainable income.


Masrizal has chosen a course in electrical repair while Bahtiar has selected a mechanical repair course.“I want to continue my education and go to university,” Bahtiar says. “Hopefully the income I earn from being a mechanic will pay for my school fees.”

Though Aceh has seen incredible recovery and growth in the four years since the disaster, it remains one of the poorest provinces in Indonesia. Now that houses have been built and major infrastructure repaired, economic recovery assistance is one of the most pressing needs for survivors.With tsunami-related aid from the government and international organizations coming to an end, it is vital that young people have the skills that they need to continue on the path to recovery and self-sufficiency. The training is being implemented in partnership with local government agencies who help identify local experts to act as facilitators and provide professional certificates to participants successfully completing their course.On the last day of vocational training, Masrizal receives an “A” score for the course.“The more skills and knowledge that I have, the better my life will be and the more I can contribute to my community,” he says. 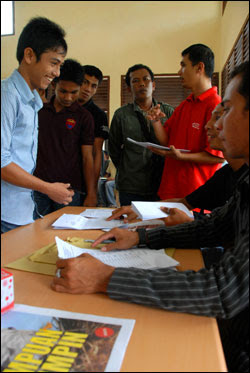 The PSP programme is working in 160 villages and 139 schools in Aceh Besar, Banda Aceh and Aceh Jaya. After over two years of support in Aceh Besar and Banda Aceh, activities in these two districts are ending while activities in Aceh Jaya will continue through December 2009.To date, 388 community and school facilitators have been trained to design and implement psychosocial activities. 5,624 individuals have been trained in psychological first aid, equipping them with the skills to sensitively respond to the needs of those affected by crisis. It is hoped that these individuals will be able to continue to support their communities in times of need long after the programme ends.With Indonesian Red Cross (PMI) and the University of Indonesia, the American Red Cross is designing and supporting a Master’s degree course in disaster psychology. The first course will begin in February 2009 with 20 students from across the country. As PMI staff and volunteers, these students will trained and prepared to respond the psychological needs of disaster survivors nationwide. 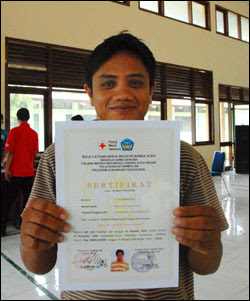 Special thanks to Wilda Anggraeni, American Red Cross in Aceh, Indonesia for some of the text and photos.

Finale: I am off to New York tomorrow night, 22 April, to be there for the presentation of the Tsunami Global Lessons Learned Report to the SG of the UN and Bill Clinton who has been his special adviser. It will be great to see New York again. The last time I was in New York was 1986 after going to the North Pole with Will Steger, and I appeared on Good Morning America in Polar bear trousers, seal skin boots, Beaver mitts with a badly frostbitten face. Dan Rather was the host on the show. That night in 1986, after 4 months of isolation, I hit New York town and had quite a party.
Posted by Bob McKerrow - Wayfarer at 19:13

Nice one bob and well done for crediting the author. You're on the piss in NY about now.... have one for me, and get one for schulzie too.

Kia ora Bob,
In a time when people are worried about mortgages, jobs, and maintaining a lifestyle, it is humbling to read of people whom have truly had to start over. These are real heroes.
Hope you are enjoying an ice cold Miller Genuine Draft.
Cheers,
Robb

Thanks Joe. I arrived in NY a few hours ago and met Shultz. He is very well...and I will have one for you after work. Bob

I will be finishing work in our NY office soon and will be going out to see a little of NY. I am on Manhattan Island near the water front and the Chrysler building close by. Cheers, Bob

Hey good on you Bob, thanks for the stories. Its hard even haven been there to understand what those people have lived through.

Good morning from New York Jamie. Yes, some of Tsunami victims have been to hell and back, but still can smile.