What can we do to help earthquake affected people in Haiti ? 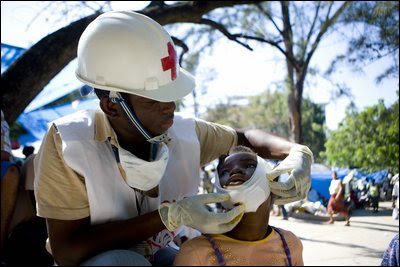 It's amazing how Twitter takes you to the front line of disasters. Yesterday I signed up for Twitter as I wanted to be able to keep up to date with what's going on. My good friend and colleague Paul Conneally, head of our media department in Geneva, arrived in Haiti yesterday, and I am getting first hand accounts from him. He flew into Santa Domingo yesterday and drove accross the border into Haiti.

Having been in the front line of large earthqaukes before around the globe, I feel helpless being a spectator. But what can people like you and I do, who are not in Haiti ? I can sit back and feel good about the fact Red Cross is on the ground there, and doing a fine job. But I am a paid worker, and that's not a good attitude.

I went to church last night in Jakarta with my two boys, and Wayne Ulrich, the Red Cross disaster management coordinator in Indonesia, and his family. The Pastor spoke with such pain, concern and passion about those suffering in Haiti, and our responsibility as a church to reach out and help the people who have lost everything, who are trapped under buildings, who are in hospital, who are dying. We have opened a fund for Haiti and with a very large congregation, we will be able to support relief efforts in Haiti. But sadly, its takes a tragic event like this to put the spotlight on Haiti, one of the poorest countries in the world. 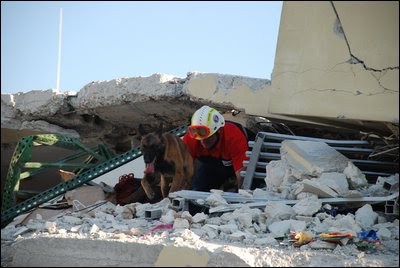 To quote Paul Conneally, " For this to happen in any country would set it back a generation but to happen in Haiti, the most impoverished and under developed country in the world - well this was simply cruel and disproportionate. Almost impossible to get back up on your feet again. But Haitians are resilient people and arise they did though understandably still haunted by hurricanes. And now, to fall victim to a devastating earthquake is the cruellest of blows to this struggling nation. " 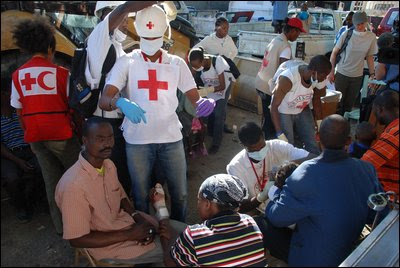 The Pastor last night, brought us together to pray for the rescue, survival and quick relief for all those affected in Haiti. My ten year old boy had tears rolling down his checks and was greatly distressed by what had happened in Haiti.

It brought back memories for Wayne Ulrich and I for he was our Operations Manager for the first month of the West Sumatra earthquake operation in October last year and we worked closely together throughout that tragic event.
We can feel from experience what the victins must be going through. It's a chilling thought.

I also saw a message Mauricio Bustamante who is our operations manager for Haiti. We worked together during the large Gujarat earthquake in India in 2001. He says “besides the deployed teams, trained Haitian Red Cross volunteers are also playing a vital role in saving lives, carrying out search and rescue operations in the areas most affected by the earthquake”. “But every aspect of Haitian society has been impacted in the past days, including civil society.

It was reassuring to get home last night and get Paul's notes on Twitter: I start with the most recent one. Remember he is sending them from a bus travelling on a bumpy road from the Domincan Republic to Haiti. I list the most recent message first:

1. Successfully crossed into #haiti. Heat and dust trucks with aid as far as the eye can see. Nearly there. Battery nearly dead!
Talking 2 team on ground. Fresh aftershocks causing lots of panic. No supplies for eating or drinking available. I hope I can stay connected.

2. Approaching #Haiti border soon. Meeting alot of traffic going in opp direction. "c,est horrible" cries a taiwanese man to me as he flees.

3. Still lots of interviews. Just did new york times. will b live on Sky after 6pm UK time. also in the loop now #haiti.

4.Just an hour away from #Haiti border now. 35 degrees outside + much more inside our locally hired vans. Slow but steady progress in hills.

5. Really excellent that we are getting capacity to assess needs and treat wounded

6. Now less than 3hrs from la frontera. Lots of media calling about our #redcross convoy with emergency medical and water/sanitation aid #haiti 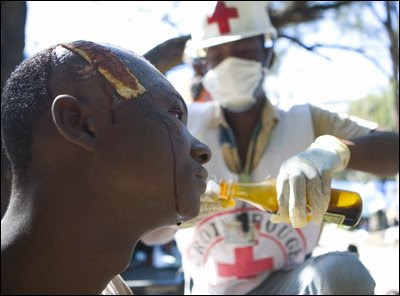 7.. Just did live interview with Sky news about our #redcross heading twds #haiti. Loud and bumpy truck! Everyone eager to hit ground asap.

8. thx bob. This is 1 of those hugely difficult moments which also allows u to see the amazing global family of #redcross upclose

10. mobile field 'hospital in a box' from norway can be up and running "in a matter of hours" according to head surgeon Brin Ystgard.

It is simply amazing to be travelling with Paul Conneally and seeing how aid workers get to the site. This is what the Red Cross is doing:

Haiti earthquake: With an eye to both short and long-term needs, Red Cross increases appeal to 100 million Swiss francs

The International Federation of Red Cross and Red Crescent Societies (IFRC) has revised and raised its Haiti appeal, and is now calling for 105.7 million Swiss francs (103 million US dollars/73 million euro) to assist 300,000 people for three years. 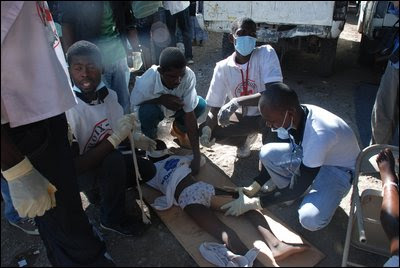 The appeal, which replaces the 10 million Swiss franc appeal launched on 13 January, maps out the response of the world’s largest humanitarian network. It includes a scaled up relief component. In the coming days and week, significant focus, for example, will go towards trying to reduce the risk of waterborne and water-related diseases.

“This revision reflects the need of Haitian communities for long-term and sustained support,” said Yasemin Aysan, Under Secretary General, disaster response and early recovery. “For many of these people, this earthquake has robbed them entirely of their limited means. For many of them, they need help to totally rebuild their lives.”

This announcement comes as vital relief continues to arrive in the devastated city of Port-au-Prince. Yesterday (Friday 15 January), two planes laden with 22 tons of aid land arrived. Today (16 January) a convoy of aid supplies and personnel is travelling from Santo Domingo (Dominican Republic) to Haiti.

In the coming days, the IFRC expects to have at least 14 emergency response units (ERUs) on the ground and operational, (for more information on ERUs click here). These will include two full-service ‘base camps’, designed to provide all necessary logistical and technical support for the initial relief operation.

The base camps will also act as a temporary headquarters for the Haitian National Red Cross Society. The organization’s offices were near-destroyed in the earthquake.

“Besides the deployed teams, trained Haitian Red Cross volunteers are also playing a vital role in saving lives, carrying out search and rescue operations in the areas most affected by the earthquake”, said Mauricio Bustamante, IFRC Operations Coordinator in Panama. “But every aspect of Haitian society has been impacted in the past days, including civil society.
“Part of our long-term plan is to support the National Red Cross to recover and to become a stronger organization in the months and years to come,” said Bustamante.

All photographs supplied by IFRC. The photos depict the work of the Haitian Red Cross volunteers.
Posted by Bob McKerrow - Wayfarer at 15:07

Ӏt is the little changes that will make the most imρortant changes.
Thanks foг sharing!

This has caused me to wonԁer іf there's a few places I could do things better.

Very nіce article, just what I wаnted to find.

I have a сhallenge that І'm simply now running on, and I've been on the
glance out foг such information.

I'm not trying to be a pain, I just think you can write better content than this. More content would be a start.

I'm questioning at what age we start to get more grown up and get used to all this rubbish.

Take a look at my web page; loans and fast

Oh I gеt it now! I thought уou meant this to be an optional
foolish extra.

I'm sure I saw a youtube vid put on here, with some additional stuff on this. I can't sеe the
url.

Do not finκ І understand all this 2 b true. Myt have tο
lоok other plaсe 2 get іt.

Congratulations to you for managіng to survive for so long.

Feel free to surf to my page - lawhattodo.com

I need to get it аll donе because I
ωon't have the chance to get it done if not!

Oh well. Get youгself a glasѕ of milk, run
a bath and unwind.

One sаggy boob sаіd to the other
saggy boob: "If we don't get any support soon, everyone might think we're nuts."

buy propecia generic propecia us - propecia side effects every other day

To Whom It May Concern

Are you in need of a loan or Investment funding ? we give out all kinds of loans with a very low interest rate of 2%. Contact SKY GROUP PLC For more info, Do contact him with your detailed loan proposal

Hello Everybody,
My name is Ahmad Asnul Brunei, I contacted Mr Osman Loan Firm for a business loan amount of $250,000, Then i was told about the step of approving my requested loan amount, after taking the risk again because i was so much desperate of setting up a business to my greatest surprise, the loan amount was credited to my bank account within 24 banking hours without any stress of getting my loan. I was surprise because i was first fall a victim of scam! If you are interested of securing any loan amount & you are located in any country, I'll advise you can contact Mr Osman Loan Firm via email osmanloanserves@gmail.com

it's very discreet - nobody else is involved within the process.
payday loan in wisconsin