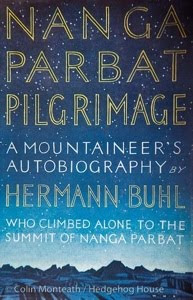 For over 17 years this precious book has been proudly displayed on my book shelves in Kabul, Peshawar, Almaty, Dhaka, New Delhi and up until a week ago, Jakarta; all places I have lived since I bought a first edition of Herman Buhl's book Nanga Parbat Pilgramage in the bazaar in Peshawar in 1994.
This book contains the last known signature of the greatest 20th century mountaineer, Herman Buhl.

The book that I purchased, along with many others in Peshawar, was a presentation copy to the Political Agent in Skardu, signed by the four members of the 1957 Austrian Karakoram Expedition including Buhl himself. 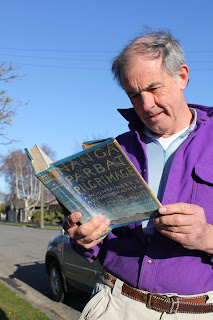 Last Sunday I presented the book to Colin Monteath  (left) to display in his Himalayan collection at Hedgehog House in Christchurch. Such a rarity, should be available to researchers and mountaineers as it is part of mountaineering history rather than being stuck on my shelves where few people can see the book. Photo: Bob McKerrow

Colin has put some superb photos of the mountains that Hermann Buhl climbed on plus further information.  Please visit Colin Monteath's site at the link below 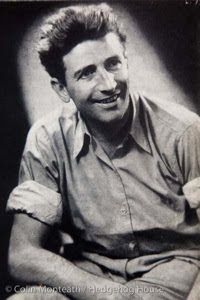 In 1953, just a few months after Everest was first climbed, a German expedition pulled off the audacious first ascent of Nanga Parbat in Central Pakistan (8125 metres - the most westerly 8000 metre peak), that had claimed the lives of many German climbers during frequent attempts in the 1930s. Despite orders to return to base camp Hermann Buhl (left) pushed on to the summit (without supplementary oxygen) in what turned out to be a 40 hour climb that included a bivouac.

The 1957 Austrian Karakoram expedition left Skardu and trekked up the Baltoro glacier to a base camp under Broad Peak near K2. All four Austrians finally made the first ascent of the 8047 metre giant. Only two weeks later however, Hermann Buhl (right) died when he broke through a cornice after turning back shy of the summit of Chogolisa (7654 metres), a beautiful virgin peak within sight of Concordia. His partner Kurt Diemberger didnt see the fall and no trace was ever found of Buhl. 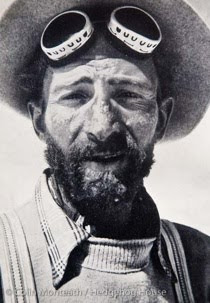 Wrinkled and exhausted, Hermann Buhl after his remarkable solo push to claim first ascent of Nanga Parbat in 1953.


I have copied the very historic words which appear in the first two blank pages of the book: 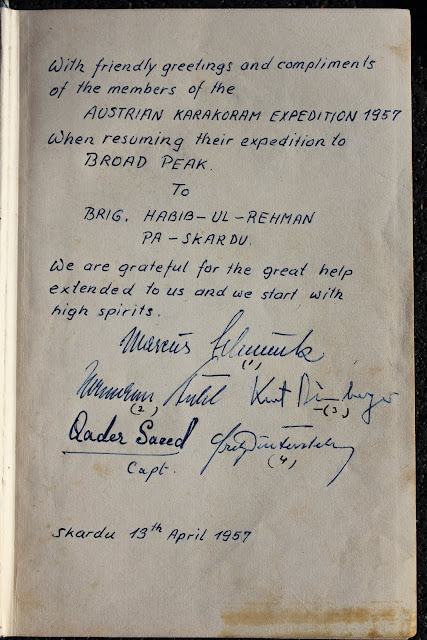 The inscription in the book with the signatures of the 1957 Austrian Karakoram Expedition. The full words are:

With friendly greetings and compliments
of the members of the


When resuming their expedition to 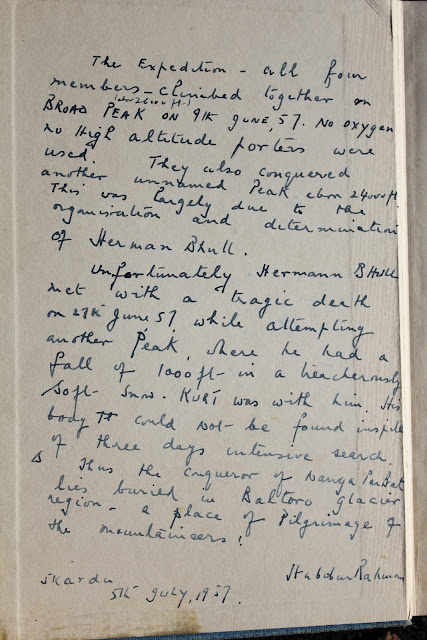 The words written on the page opposite under the signature of Habib ur Rahman, Political Agent Skardu on 5 July 1957.
In full they read :

The expedition – all four members – climbed together on BROAD PEAK ( above 26,000 ft) on 9th June 1957 No oxygen no high altitude porters were used. They also conquered another unnamed peak above 24,000. This was largely due to the organisation and determination of Herman Bhull (sic).


Unfortunately Herman Bhull met with a tragic death on 27th june 1957 while attempting another Peak. There he had a fall of 1000 ft in a treacherously soft snow. KURT was with him. His body could not be found inspite of three days intensive search.


Thus the conqueror of Nanga Parbat lies buried in the Baltoro Glacier region - a place of Pilgrimage of the mountaineers !

5th of July, 1957
So yesterday when I departed Christchurch by train for a holiday on the West Coast of New Zealand's South Island, I felt that finally this rare book has a safe home with Colin Monteath and his Himalayan collection in Christchurch. Buhl's incredible story and the remarkable inscription now lies alongside  those written by other great Himalayan mountaineers.
Posted by Bob McKerrow - Wayfarer at 21:04

Kia ora Bob,
What a fantastic peice of mountaineering history. Though I am no mountaineer I love mountains and the history of the climbs. Those are stories and names I well recognize, a different era of climbing to be sure than todays stuff.
Good to know this treasure will be well cared for by Colin. Speaking of mountaineering history, if you come across Ed Cotter please pass on my best and finest regards.
Enjoy the holiday my friend.
Cheers,
Robb

Kia Ora Robb. Thanks for your feedback. I am writing this as I see a red tipped West Coast dawn out the window at Ross. Fantastic views of Aoraki yesterday.

I will say hi to Ed and Colin on your behalf.

Yes, it is a wonderful piece of mountaineering history and am delighted the book is with many departed friends in Colin's treasure chest.

May the ABs win tonight.

That's a great and generous gift, Bob. I can imagine the feeling of holding the book and looking at Buhl's signature. Such things evoke complex and profound feelings.

I suspect the ABs will be in for an exceptionally tough and torrid game tonight. Let's trust they've matured into the kind of team that can handle the pressure.

Yeah Pete, you've put your finger on it. Everytime I looked at Buhl's signature I felt part of that great man and his amazing mountaineering achievements.

I am picking the ABs will withstand the pressure, the onslaught and everything else thrown at them tonight, as the are a humble and hungry bunch of guys.

I hope the West Coast is treating you well. I was over there briefly this week walking down the Arahura and Styx.

Just spent an hour or so catching up on your blogs, including the Warrington Taylor one that I hadn't seen before, and looking at Colin Monteaths new website as well.

Its just brillliant to have these stories and photos out there on the web to inspire us all.

I also stumbled on your earlier piece about Anatoli Boukreev, it was good to get a new perspective as my only previous reading on him was Krakeurs "Into Thin Air".

Dear Jamie, Just watched the ABs win ! What a game. Boukreev was wrongly put in a bad light by Krakauer, as Boukreev was a brilliant mountaineer and superb guide, who knew how to let people feel they did it themselves.

COLIN HAS A TOP WEBSITE SO HAPPY YOU DROPPED IN.

i AM ENJOYING THE COAST. THANKS FOR YOUR FEEDBACK. BOB

What a special book and a nice gesture. Hope you enjoying the trip to the west coast. Must be beautiful with the snow on the mountains.
I love coast walks so I would love to hear about your trip.Is Hari hari close to Ross?
We passed through Ross several times but never stopped there.

The west Coast is a special place. I was in Hari Hari today and poked up a few river valleys, and took some hreat photos. I will post some in a few days time. Have a good week. Bob

My dear friend from Japan. Neither Rome nor Tokyo were built in a day.

Greetings from Kosovo - I'm just back again from France. I like your photos from New Zealand - it's always good to see some mountains and snow! I guess I'm in the wrong hemisphere at the moment! Could you have a look at your Federation e-mail account as soon as possible? There should be an important message for you. Thanks in advance.

I would like to exchange links with your site bobmckerrow.blogspot.com
Is this possible?

Hey! Do you use Twitter? I'd like to follow you if that would be ok. I'm undoubtedly
enjoying your blog and look forward to new posts.

my weblog - what should i weigh for my height