Keeping 2,000 families warm through the coldest winter for 15 years

Spare a thought for Akram Salam Khan a 12 year old boy who lost both hands two years ago. He survived the harsh winter in Kabul, but what is the hope for so many children who not only lost limbs, but a childhood . This article moved me deeply and I bleed for this young man. I am so pleased the Red Cross Red Crescent is doing something to improve his life. If you want to donate, click on this link.


Over the last couple of weeks, the Afghan Red Crescent Society, with the support of the International Federation of Red Cross and Red Crescent Societies, has helped almost 2,000 families in Kabul through the coldest winter for 15 years. The organization has distributed blankets and clothes. 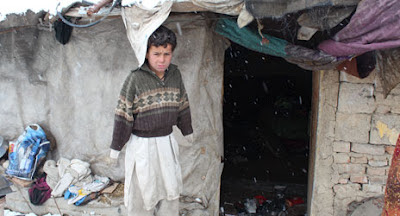 Akram Salam Khan, 12, is one the assisted children. He and his family are among the returnees living in a tent near the ruined Darolaman castle in Kabul. Ali Hakimi/IFRC

Hundreds of people returning from Pakistan and those displaced from conflict-affected areas, particularly in southern Afghanistan, are currently enduring the exceptionally cold winter and heavy snow fall, living in makeshift tents in Kabul.

Most of the tents have no heating. Some families may have blankets, others only the clothes they own and the body heat they generate when lying close to one another under a plastic sheet.

Akram Salam Khan is 12 years old. He and his family are among the returnees from Pakistan, living in a tent near the ruined Darolaman palace in Kabul.  “We use garbage to warm the tent at nights,” he said.

“Collecting garbage from the streets has become our routine job for every day. We do not have enough money to buy fire wood or coal.”
Most of the displaced people are farmers who have land for agriculture in their hometown. During the harsh winter season it is almost impossible to find a job. Now their income is based on casual daily work such as construction and selling small items.

Akram is the eldest son of a big family with five brothers and three sisters. He lost his both hands around two years ago while collecting fire wood. He accidentally touched an electricity line, got an electric shock and was seriously burnt. His family did not have enough money and could not take him to a hospital for treatment.

“After the accident my father failed to bear this tragedy fully but gradually his mood changed for better,” Akram said. “Now he is suffering from mental problems and is not able to work outside. So I am the one who must go out to bring money to the table. I am begging on the streets to buy some food.

Thanks to Ali Hakimi in Kabul
Posted by Bob McKerrow - Wayfarer at 01:08