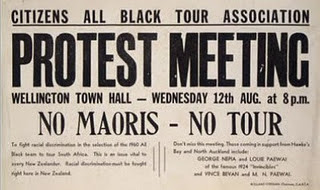 I was born on a hill overlooking that famous rugby ground, Carisbrook in Dunedin, and watched the All Blacks play the mighty 1956 Springboks when the late Ron Jarden scored an intercept try for the All Blacks to clinch a 10-6 win in the first test of the tumultuous series of 1956.

Rugby test between these two great rugby playing nations in Dunedin are rare, so tomorrow’s rugby test match between the All Blacks and the Springboks brings back many memories, some of them bitter ones, during the time of South Africa’s repressive apartheid regieme.

The new Sringbok’s captain Jean de Villiers' may not have been the most successful capatain so far, but a win against the All Black in Dunedin tomorrow night will go a long way towards easing the pressure.

"The team knows what is expected from them, it's a New Zealand v South Africa test and that always will be special.

"Growing up, playing in the back yard, you dream about these days, representing your country against the All Blacks, said de Villier in Dunedin yesterday.

Like de Villiers, I grew up dreaming of being an All Black and playing against South Africa, until the tragedy of the 1960 All Black Tour to South Africa upset my 12 year old mind.

My memories of the apartheid era in South Africa go back to that cold, crisp winter's morning at Montecillo Ground, Dunedin, in mid-July 1960. A heavy frost covered the ground. I was playing for Zingari Richmond under 7 stone schoolboys and as I smashed my way through the opposition, I hit a wall of players and fell to the ground, landing arkwardly. The pain was excruciating as I writhed on the ground. I had broken my collarbone.


I was in considerable pain for three months as I walked and bused between the Dunedin hospital, physiotherapy department and doctors. It had just been announced that an all white All Black rugby team would tour South Africa. It was a bombshell to a young rugby player who had watched Waka Nathan, Mac Heriwini, Phillip Tautarangi, Ron Rangi and other Maori All Black hopefuls play for Auckland against Otago at Carisbrook a few weeks earlier. These guys ran like quicksilver, and cut through teams like swords. Legends such as Manga Emery, Alby Pryor, Muru Walters, the Maniapoto brothers and other were also not going to be given the chance to wear the All Black jersey either in 1960. I was crestfallen and confused.

I pleaded to my Father and shopkeepers I knew in central Dunedin whose shops I walked past on my way to the hospital. Their shop windows had posters of the touring All Black team, but without Maori. I asked respected shop owners who had played rugby and cricket such as Charlie Saxton, Vin Cusack, Walter Findlay, Doug Cederwall and even Bert Sutcliffe, why there were no Maoris in the All Black team. They had similar answers, " That is what the South Africans want,"

As a 12 year old I felt there was no justice in this world, yet on ANZAC day, we were told the Maori and Pakeha (European) had fought side by side in two world wars.

Well they weren't going to be playing side by side in the 1960 tour of South Africa.

So tomorrow as the New Zealand side plays South Africa with over 50% of it’s players of Polynesian origin, let's remember those New Zealanders of Polynesian descent who were barred from touring South Africa in 1960 - Waka Nathan, Mac Heriwini, Phillip Tautarangi, Ron Rangi, Manga Emery, Alby Pryor, Muru Walters, the Maniapoto brothers and many more who should have been in that 1960 team.

All Black rugby team are legendary. They're special. If you're a rugby lover you will enjoy 6 Nations hospitality. It's gonna be fun.

They need to see doctor for some advices on how
they can take control of their blood pressure. There are
approximately 17 million people in the US that suffer from some type of yeast infection.

licitations with regards to making ones cachet that is most
certainly Talbots at present. Different from other girls, she did not wear the very sexy short dress and very
high-heeled shoes, she only wore a white skirt, which suited her slim
figure very much, and her hair was very straight, she had white and smooth skin,
a pair of big eyes which could speak for her, I saw the unique charm in her.
There is use of only the best of natural vegetarian
ingredients like rehydrated textured soya, wheat flour and
wheat protein, vegetable oil that has salt and some fatty acid emulsifier namely mono-glycerides and di-glycerides.

Check out my weblog nutlets

In the US, we still express this as cubic inches, feet, or
yards. Concrete finishing is very much like smoothing out
frosting on a birthday cake. Flawless Flooring's polished concrete floor product boasts durability and decorative seamless surfaces made mainly from epoxy and polyurethane materials.