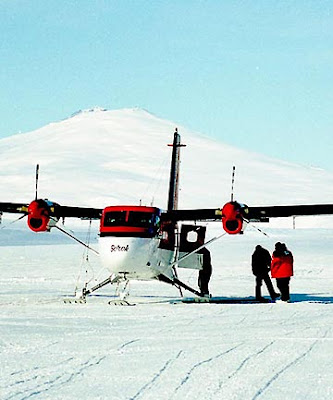 0830 IST 25 January 2013. Rescue teams waiting for a break in the weather in a search for a missing plane in Antarctica will have just 30 minutes to complete the operation, due to conditions at such a high altitude.
Three Canadians were flying a Twin Otter that failed to make it through the Queen Alexandra mountain range on a trip from the South Pole to the Italian base Terra Nova Bay in the Ross Sea.
An emergency locator beacon was activated at 10pm on Wednesday (NZ time) from the northern end of the range, but rescue teams have been forced to wait until cloud lifts in the area on Friday.
It is not known whether the plane crashed or made an emergency landing, but the transmitter sent a clear position before its battery ran out.
Two helicopters and an expert rescue team are ready to fly to the spot pinpointed by the Twin Otter's transmitter at the northern end of the mountain range near the Ross Ice Shelf. 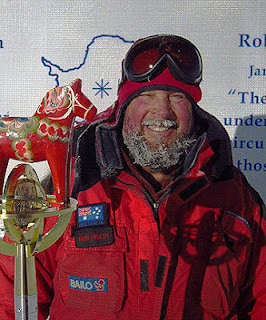 Pilot Bob Heath(left)  who has 25 years' experience polar flying and training pilots, and two other men have been missing since Wednesday.
New Zealand Search and Rescue mission coordinator Kevin Banaghan says the cloud is forecast to scatter and winds should die down, but conditions will still be punishing.
"The actual position itself is at 13,000 feet, so it's quite high. These helicopters can only operate with that elevation for about half an hour. So they've got to get in, get the job done and get out as
quickly as they can."
Mr Banaghan said a search plane flew over that spot earlier on Friday but could not get a clear view through cloud and had to turn back. The cloud is forecast to scatter in the next day and 90-knot winds should die down.
The missing men have a survival kit on board that could last them five days. Long-time friend Tony Szekely said he has faith in Bob Heath's survival skills and remains optimistic the men will be found alive.
"Bob's been trained in Antarctic survival, is very knowledgeable. I'm optimistic because it is Bob and not somebody else. He's one of the best pilots I know."

Thanks to Radio New Zealand.