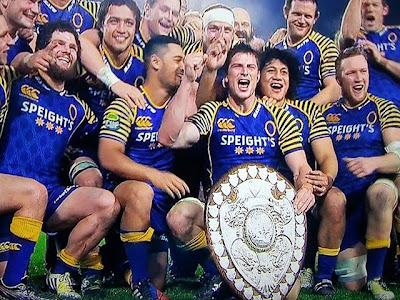 I was just a kid in the middle of an icy winter at Mornington School, Dunedin, NZ,  in 1957 when Otago last lifted the Ranfurly Shield. (Log of Wood). I never thought I would have to wait 56 years to see my province regain the trophy.

Tony Brown couldn't do it as a player but he has created history as coach, taking Otago to their first Ranfurly Shield victory in 56 years.
"The whole of Otago are over the moon," Brown said after his team beat Waikato 26-19 at Waikato Stadium last night to lift the coveted Log o' Wood for the first time since 1957.
"I've got 105 texts on my phone already since the game finished," Brown said half an hour after fulltime. 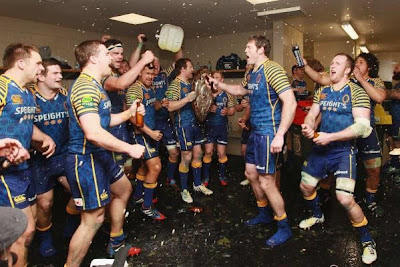 The Otago team celebrate with their sponsor's product Speights Beer after their victory.

Otago had lost their 22 previous challenges but the winning try scored by replacement flanker TJ Ioane off a 5m scrum after he had got the steal to launch the initial counterattack and the deadly accurate boot of young first-five Hayden Parker ensured it was not 23.
"That's a lot of failed challenges, a lot of challenges when they've been in front with 20 to go, 10 to go, or two to go or one to go.
"I only had the one challenge myself as a player and we were 15 points up with 10 minutes to go [against Canterbury] and I think Caleb Ralph scored in the last minute to win it for them.
"So there's been a lot of heartache for Otago rugby over the Ranfurly Shield and I guess tonight the boys have just put that to sleep."
Brown said they did it for all the players who had gone before who had narrowly failed to win the log because they respected Otago history and the players who had played for Otago before.
"Every time we take the field we want to play for them and especially tonight with the Ranfurly Shield challenge that was our goal.
"I think every one of my players left nothing in the tank and they emptied it for past Otago rugby players," he said.
The massive defence by Otago that kept Waikato to just one try despite the holders  enjoying over 60 per cent of both possession and territory summed up the heart of every player in his team.
"That's always been Otago rugby - a good bunch of Otago Country and Otago players  mixed with a few students who buy into the Otago culture and that's where we perform best," Brown said.
Waikato coach John Walters said his team had not played to their game plan and tried to play catch-up rugby too early, forcing passes early on rather than holding onto the ball andbuilding pressure.
"We were getting good momentum from our big fellas and we started to get points, but we just panicked a little bit and weren't patient enough at crucial times and in a shield match those things really hurt you," Walters said.

Lifelong Otago fan Cyril McDermott, one of few old enough to witness the last time Otago held the shield, remembers a dominant southern era between 1935 and 1950 when the shield was shared between Otago and Southland.
"There were no superstars but every player was good and they were a strong side", he says of the Otago team.
"Particularly when Southland would come up to challenge for the shield there would be special trains run. It was a huge occasion; everyone flocked to Carisbrook in those days."
McDermott chuckles at the suggestion of a curse on the Otago team.
"I guess for most of those 22 [games] we probably haven't been good enough."

Since Otago last held the shield, it has changed hands 48 times and been held by thirteen different unions.

I cannot describe adequately what it means to have the Ranfurly Shield in your home town; not dissimilar to winning the Rugby World Cup
Posted by Bob McKerrow - Wayfarer at 03:09

South Canterbury is one of those teams. We won it in 1974 from Marlborough. A successful defence against North Otago and then the big boys came down from Wellington and took it away. It has never been back.

I can still remember that Wellington game. Fraser Park (as it was then called) was packed with over 12,000 people. Our guys played really well against a far more talented team from the capital, but in the end class won out.I think the score was 9 - 3 to Wellington.

I just happened to catch the last 5 minutes of today's game and was pleased that Otago hung on for the win. Nice to have the shield in the South again.

Thanks Gollum. There is something very nostalgic about holding the Ranfurly Shield. Loved your story.