The disgraced Prince, Charles Edward, Duke of Saxe-Coburg and Gotha. 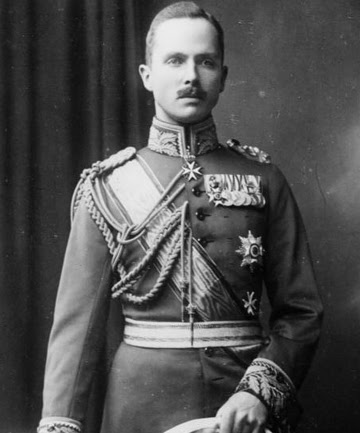 ROYAL DISGRACE: Charles Edward was stripped of his royal titles after siding with Germany in WWI.


Nobody embodied the disastrous state of British and German relations quite like Charles Edward, Duke of Saxe-Coburg and Gotha.
His father, Prince Leopold, was the eighth child and youngest son of Queen Victoria. Charles never had the opportunity to meet his his father; Leopold, who suffered from haemophilia and died when a minor fall caused a severe hemorrhage in his brain.
Charles was born just three months later.
Charles had an idyllic childhood. Known around the palace as 'Charlie', he was Queen Victoria's favourite grandchild. His best friend was his sister, Princess Alice; the two were known affectionately among their family as the 'Siamese Twins'.
But his pleasant life shortly fell into a tailspin. At the age of 15 he inherited the title Duke of Saxe-Coburg from his recently deceased uncle, Prince Alfred.
Charles was the victim of a battle of succession: his uncle and his cousin both renounced any claim to the title, choosing to keep their comfortable positions in the British royal family.
His cousin, who attended the same school as Charles, reportedly bullied him into accepting the dukedom.
In the end, Charles' family made his choice for him. The 16-year-old was shipped off to Coburg, a tiny town in Germany, where he embarked on a miserable life separated from the family he adored.
When the first world war broke out, Charles was caught at a crossroads. Torn between siding with his ancestral home, Britain, and the country he now ruled a small part of, he made the fateful decision to side with Germany - a decision that led the British royal family to brand him a traitor and strip him of all royal titles and peerages.
The strife didn't end there. In 1918 Charles was deposed during the short-lived German Revolution, relinquishing all rights to his royal titles. Now a private citizen, the hapless Charles was held in disgrace by both the German and British public.
Lost and demoralised, Charles found solace in his work with a variety of right-wing political groups. He became particularly fond of a young, political upstart named Adolf Hitler, whose strong leadership attracted the alienated Charles.
He became the first aristocrat to endorse the future Fuhrer; doing so ushered him into Hitler's inner circle, where he remained until the end of World War II.
Hitler was keenly aware of Charles' former royal status, and sent him to Britain as President of the Anglo-German Friendship society. Charles thrived in Britain, where he worked to increase German sentiment among the top-tier of the British hierarchy. He attended the funeral of his cousin, King George V. Because his British ceremonial robes had been confiscated, Charles arrived at the funeral in full Nazi regalia.

Hitler appointed Charles head of the German Red Cross, a group that was under the control of the Nazis. Doctors who worked for the organisation were implicated in the mass euthanisation of handicapped Germans, which resulted in the death of tens of thousands of people. Charles later denied all knowledge of this - some of his underlings, however, were imprisoned.
Perched in his Coburg palace as the war blazed around him, Charles was eventually arrested by American troops. His beloved sister, Alice, flew to Germany to request his release. When she arrived, she found him scavenging through a rubbish dump for food.
Charles faced a tribunal. He was found guilty of being an "important Nazi" - his ill-health saved him from a prison sentence.
The Prince had become a pauper. Old and sick, he made his way to a movie theatre in Coburg, where he watched his cousin's granddaughter, Queen Elizabeth II, receive her crown. His beloved sister, who represented the life he had always pined for, could be seen on the big screen, smiling and waving with her family.
Charles Edward died alone in his flat in 1954.
With deep appreciation to stuff.co.nz for permission to use this article.
Posted by Bob McKerrow - Wayfarer at 20:39