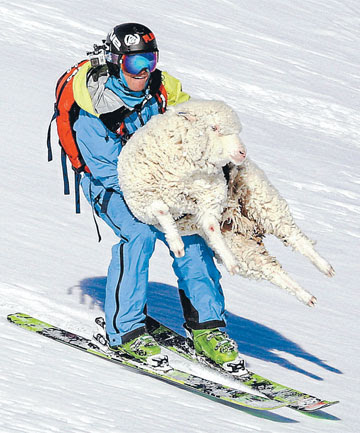 Alpine Rescue: Marlborough skier Pete Oswald rescues a 40kg sheep stranded high up the Hector Mountains, in Otago.
People often ask me, " Why are you so happy or proud to be a New Zealander?"  I usually mention that we are close to the land, care for everything about us and dare to be different. This story about a skier rescuing a 40kg stranded sheep, picking it and skiing with it down to safety, epitomizes what it is to be a Kiwi.


A snowballing sheep will become the stuff of legend for semi-professional skier Pete Oswald.
The Marlborough man carried out one of the world's few sheep rescues on skis after an exhausted ewe slid into his life.
He was high in the Hector Mountains, Otago, on a photo shoot for Snow Action Magazine with Southern Lakes Heliski when the woolly story unfolded.
Oswald, 29, and photographer Dan Power were on the last run of the day setting up for a shoot when a piece of snow fell from the slope and hit Oswald's ski boot, causing him to take a backward glance at the slopes.
He saw a "little bundle of wool" tumbling head over feet over a rocky ridge and down the mountain.
The sheep landed 100 metres from Oswald and, fearing the sheep had been killed, he skied over for a closer look.
"The sheep's head was bent underneath its body. I put the sheep upright and it was bleeding from the nose. It was trying to walk but was totally exhausted. It wouldn't have survived if I had left it there."
Oswald squatted down and lifted the 40-kilogram ewe on to his legs and skied slowly down the slope.
"It was really hard to ski, there was a lot of wool in my face when I carried it."
He nearly fell over a few times travelling down the mountain before leaving the lucky sheep on a flat, grassy area where it could feed. The sheep slowly walked off unperturbed by its snowy ride.
His father, John Oswald, a former farmer from the Awatere Valley, told him the sheep could have been up there since the start of winter. Its wool had not been shorn and was inches deep.
"They are pretty resourceful animals," Oswald said. The sheep was fully grown, a female and was tagged.
"It's a bit of a yarn. It is definitely the oddest thing I have found skiing."
Oswald is a semi-professional skier and cinematographer based in Innsbruck, Austria.
During his career he has seen mountain goats, marmots in France and bears in North America but the sheep is his favourite find. Thanks to the Marlborough Express for permission to run excerpt from this article.
Posted by Bob McKerrow - Wayfarer at 19:23

Oh the link to your blog was stuck for ages and now it works again. how impressive to ski with a sheep Can't believe it

Are you paying over $5 per pack of cigarettes? I'm buying all my cigarettes at Duty Free Depot and this saves me over 60% from cigs.