In 1991 I helped organize a reunion of Mountain Guides at Franz Josef and Fox Glaciers  to commemorate 100 years since the New Zealand Alpine Club was formed; Thousands of photographs were sent to me to mount a huge photographic exhibition in the Franz Josef community centre. Whilst I made every effort to return them, some people dropped off unmarked photos and I ended up with a small box full of unmarked and unclaimed photos. At the reunion was Billie Mercer the daughter of the famous NZ pilot Bert Mercer and also I recall a relative of another famous West Coast pilot,  Richard Waugh.

One photograph that was never claimed and has  always fascinated me was this one below of ZK BCP , a de Havilland Dominie that figures in West Coast white baiting and alpine history. Today I dug into Google and found this history and photos below. 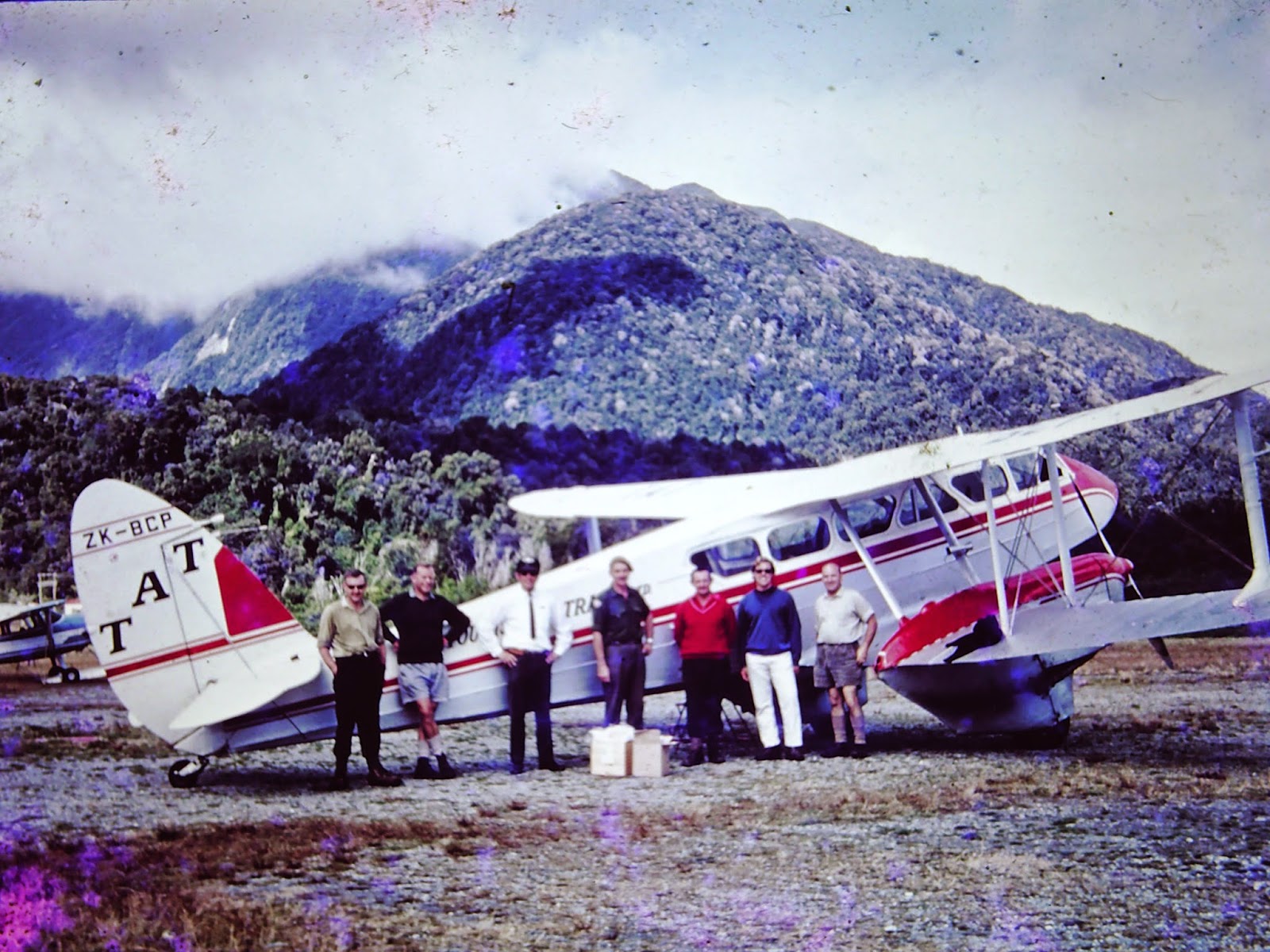 This Dominie had served with the RNZAF as NZ524 before being civilianized as a Dragon Rapide in 1953 for South Island Airways.  That company owned a modest fleet of them.

On 16 September 1959 it was acquired by Air Charter Ltd and owned by Brian Chadwick
of Christchurch.Charter Ltd .  Chadwick was a former Chief Pilot of Trans Island Airways
and prior to that South Island Airways, both previous owners of BCP. After the demise of  Trans Island Airways, Chadwick decided to establish his own air charter company appropriately   named Air Charter Ltd    The first photograph below, by Brian Purcel (via the Richard Waugh
collection) shows Chadwick with the aircraft at Christchurch in January 1962.  Shortly after
this shot was taken Chadwick disappeared in his other aircraft, D.H. 90 Dragonfly. ZK-AFB,
on a flight from Christchurch to Milford Sound.  The lower photograph was taken by Dave
Freeman of ZK-BCP in 1970, by which time it was owned by Mt. Cook Airlines.  It comes
courtesy of the Ken Tilley collection.   ZK-BCP was sold in Australia in 1975 becoming
VH-BGP.  It was once part of the ill-fated Wangaratta Airworld Museum.    It is now owned
by Bruce Ivers who is having it lovingly restored (as a long term project) at Croydon Aircraft
Co at Mandeville, near Gore on New Zealand's South Island.     At the foot of the page is an
interesting shot by Sandy Ferguson, taken just prior to its departure to Australia wherein the
'C" had been changed to a 'G" but the VH- on the rudder still showed signs of 'ZK-" !

Another photograph from my collection below, is one of Ebenezer Teichelmann, left, after the first flight over the glacier region of South Westland in 1924. The Avro 504K  was piloted by Maurie Buckley 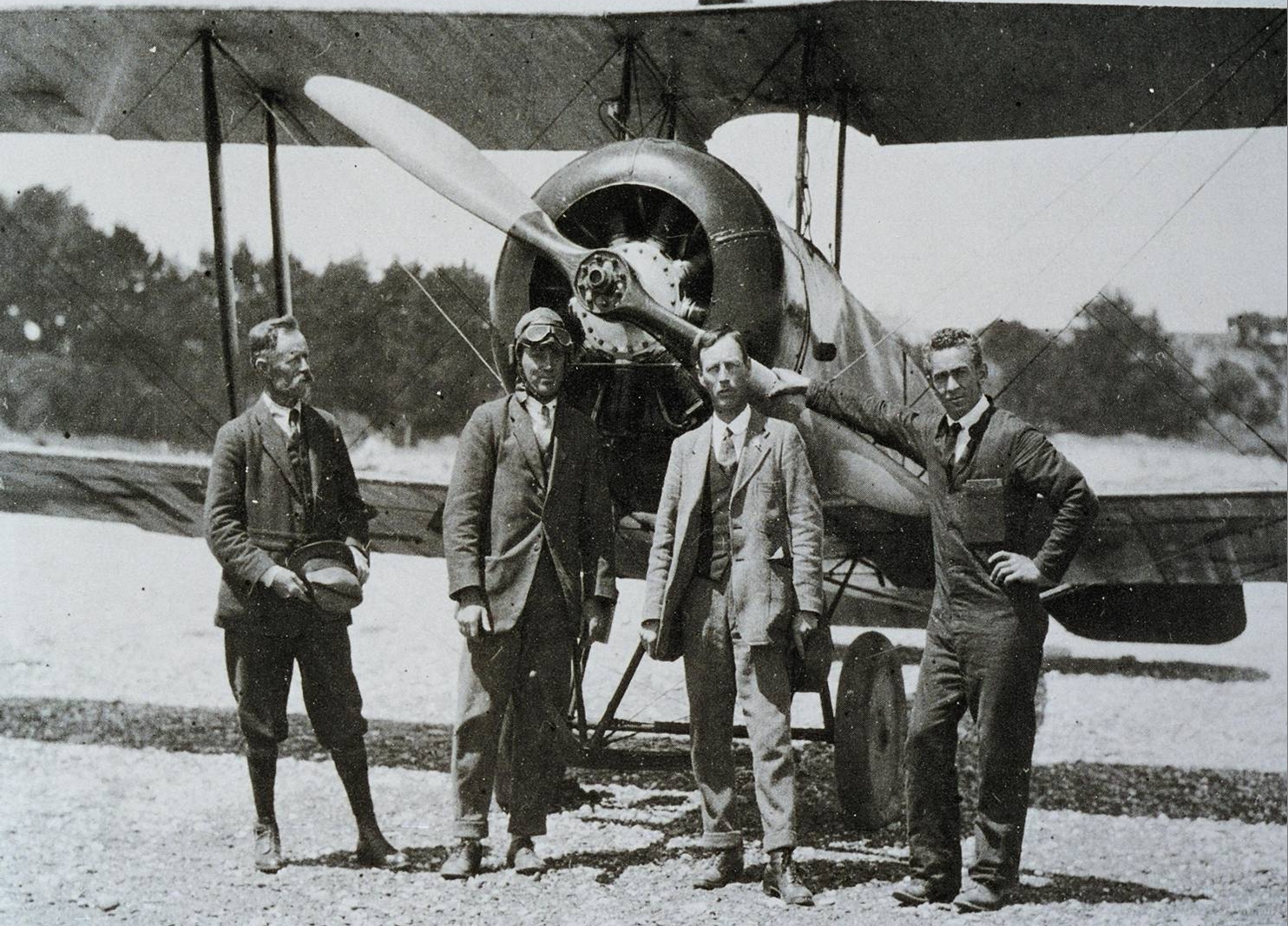