Billy Haas halfway down the enormous east face of Mt. Cook.
It’s been a good bit of time since Beau made his initial post. I was going to apologize for our delayed check in, but I won’t because we came to New Zealand to ski and that’s what we’ve been doing! For the past ten days we have been basing ski operations out of the Plateau and Kelman Huts in the Aoraki/Mt Cook National Park.
Upon arrival the weather cleared and we hit the ground skinning.
After countless emails between our crew we had all agreed beforehand that as a team we wanted to go big and ski steep. The plan was to shoot for the moon and then dial back objectives if needed and as conditions dictated.
The moon, or primary area of interest, was Mount Cook and the Tasman Glacier area. Mount Cook is the tallest peak on the island (3724m) and offers up some of the longest and spiciest technical routes in the Southern Alps.
In less than 24 hours after landing we met up with Beau and came up with a plan. We could walk in, but that would take time and energy and the weather window looked small, so we chartered a chopper into the Plateau Hut at the base of Mount Cook. Pretty reasonable at about $75 per person.
We came in hot and heavy with 5-7 days of food and lots of ideas. Well stocked and highly stoked! The weather was perfect and as we flew in we were immediately face to face with the east face. And the longer we stared at Mount Cook, it just stared right back unflinchingly. The east face of Mt. Cook.
We unpacked at the spacious and empty hut then quickly set out for a recon tour. Poking around on many aspects we found stable settled snow. The east face was the obvious route of choice (looker’s right side). It connected to the summit, was free of ice, and the snow looked really good.
Chamonix based skiers Tom Grant and Ross Hewitt flew in with us and were keen on skiing Cook as well. They were looking at the same objective, so we decided to team up and give the face a go the next morning. Map session in the Plateau Hut.
The alpine start put us on the lower face at dawn. Early ups.
Enthusiasm quickly carried us up high. A little too high in fact. We missed our left turn and were forced to make a long and sketchy traverse over white ice. At least it was exposed. Ross was giving it all he had, but a cold forced him to turn back at this point. Sharp tools and edges required.
The slope pinched and forced us out onto a steep rib then we hiked the summit ridge to the tippy top. After only a day and a half in the country we went from flip flops to front points. Now we were on top of Mount Cook about to drop in on one of the largest and consistently steep faces any of us has ever touched, having made zero ski maneuvers in many months.
The summit ridge was icy and could have been skied but it would have been really slow, dangerous, and ugly. Sense easily won out over ego and we opted to down climb. Beau had never skied with Billy or Adam before this trip and none of us had skied with Tom. This could be reason for concern, but we all worked together seamlessly which was great to see and a bit of a relief on my part since I had assembled the team.

Adam and Billy on Mt. Cook summit.
Six folks are a lot to manage on a slope, so we took our time and spaced out our turns. The snow was consistent and good. Beau working the steeps up high on the face.
And as we got further down we opened it up. This steep skiing thing is a dream when everything lines up. It’s just really rare that everything goes this well.
Back down safe and sound we cooked up a fine meal and shook our heads at how fortunate our start to the trip was. The next day was windy in the morning so we loafed around and got a late start. The next best looking line was the east ridge of Mount Dixon. Not as tall a peak, but the route looked sporty. The line is the right hand ridge that then drops back left via a couloir in the rocks. 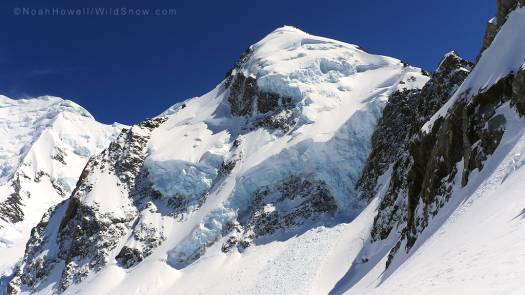 Mount Dixon.
We brought all our sharp things on this trip and so far they were coming in more than useful. Beau getting onto the entry couloir of Dixon.
The couloir held good snow as did the lower part of the ridge. Steep couloir entry onto Dixon.
This changed as we got higher and we encountered some patches of the same ice we had found up high on Mount Cook. Luckily it was only in one section. Glazed climbing up Dixon.
Sun’s out, guns out! Guns ablazing.
Turns off the top were chalky and fun on the mellow ridge. We worked our way through the ice with aggressive edging and side-stepping. Ice axes in hand just in case. Off the top of Mount Dixon.
Things softened back up and we played down the featured ridge as the sun set. Each night at 7pm we received a call in with weather so we rallied to make the call, even though the thick kiwi accents are often tough to understand. Beau lower down on Mount Dixon.
The ridge traverse into the exit couloir. Adam Fabrikant entering the final pitch off of Mount Dixon.
I admit I came into this trip having done very little research. I figured Beau had it dialed since he has spent so much time here. And he does! I didn’t understand the vast network of nicely maintained and well equipped huts that dot these glaciated peaks, not to mention the ease of accessing them via fixed-wing or heli. The walk in or out isn’t out of the question either though it’s through some very rough moraine.
Three nights at the Plateau Hut and it started to feel like home. The remaining lines that interested us would need above optimal conditions. From what we had seen there was too much ice up high to lay it out there and so we decided to move on before we got ourselves into trouble. Voile Team representing.
We loaded up our full kits and headed out for a new hut and fresh terrain. We skied around 2,000ft out the Freshfield Glacier in creamy corn. Our luck just continued to roll on! Our massive corn run down the Freshfield Glacier.
From here we crossed jumbled moraine and hit the dry glacier. This made for easy travel and we continued up the Tasman Glacier Valley for ten miles or so. 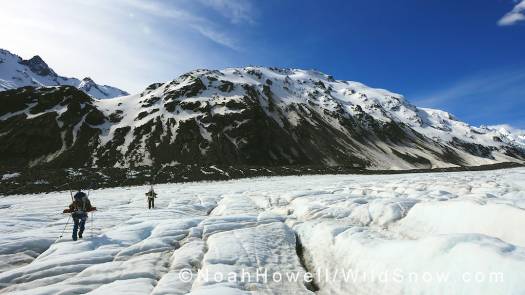 Many miles in the flats.
This is where I’m going to sign off and let Beau tell the next chapter of the story based out of the Kelman Hut. New Zealand has been an absolute dream so far!
WildSnow guest blogger Noah Howell was born and inbred at the foot of the Wasatch mountains. His skiing addiction is full blown and he’ll take snow and adventure in whatever form it takes. The past 16 years have been spent dedicated to exploring new ranges, steep skiing, and filming for Powderwhore Productions.
Posted by Guest Blogger on November 3, 2015 | Filed Under Backcountry Skiing, Huts - Cabins - Lodges, Trip Reports Backcountry, Your Guest Blogs

Thanks to WildSnowNZ for permission to run their article. What an amazing journey and superb photo.
Posted by Bob McKerrow - Wayfarer at 19:40