Nazis on the Roof of the World


A Bizarre SS Expedition to Tibet

In 1938, an SS expedition led by German zoologist Ernst Schäfer
trekked to Tibet, returning with priceless animal specimens. Many
believe they had actually been sent to search for a lost Aryan race,
but a new book argues that the truth is more complicated.
The Berlin Museum of Natural History, even beyond the famous Tyrannosaurus Rex skeleton in its exhibition hall, is well known for its treasured natural artifacts and is considered a world-class collection. It is one that includes some 3,500 mummified birds kept in tall cabinets -- highly valued items that were acquired some 80 years ago by an SS officer on the snow-covered roof of the world.

"On the southern slope of the Himalayas, the tropical Indian subcontinent drifts up against icy central Asia,"
explains curator Sylke Frahnert. "As a result of the clash between these ecological zones, completely different groups of fauna have intermingled there." Taxonomists and geneticists frequently make the pilgrimage to the Berlin collection, where 10 previously unknown bird species have been discovered over the years.But the artifacts' history is unfortunately a dark one. Shortly before the outbreak of World War II, zoologist Ernst Schäfer traveled to Tibet on behalf of SS leader Heinrich Himmler and despite a government ban, he promptly began killing birds to take back home as samples.
The German expedition of 1938-39 is regarded as one of the most controversial forays in modern science. Schäfer's team measured human heads, sat in tents made of yak hair and downed East Prussian caraway schnapps in one gulp with local officials, who called the German drinking frivolities "dry cup."

Invasive Documentation and Measurements
But the Germans were also busy collecting and researching. They killed mammals and birds, completed geomagnetic measurements and conducted ethnological studies. They filmed drunken priests and undertakers performing traditional sky burials, which involved cutting up corpses and throwing the pieces to the vultures. The crew was so intrusive with its camera at some of these rituals that the men were almost lynched.
Anthropologist Bruno Berger's behavior was particularly egregious. He used a compass, skull tongs and a device for the lower jaw to measure the bodies of local residents. He also smeared a material called Negocoll onto the faces of test subjects to make skull impressions.In their dossiers, the British accused the Germans of loutish behavior, describing Schäfer as a "priest of Nazism," but their assessment also contained a hint of jealousy.
Despite the British criticism, Schäfer rose more and more into favor. As a master of what Meier-Hüsing calls "flattering declamations," he even convinced the state's ruler, Radreng Rinpoche, to extend the group's permit for another six months. According to an SS memo from late 1939, Schäfer also secretly offered weapons to the regent, although it is unclear today whether anything came of it. 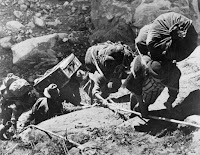 The mission -- a strange mixture of espionage, drunken revelry and a zoological foray -- ended three weeks before World War II began. In addition to the more than 3,000 bird carcasses, the group took home 2,000 eggs, 400 skulls and pelts of mammals, as well as reptiles, amphibians, several thousand butterflies, grasshoppers, 2,000 ethnological objects, minerals, topographic maps and 40,000 black-and-white photographs.
Many of these treasures are still tucked away in the archives today, frowned upon because of their association with the Nazis. Schäfer fell into similar obscurity. If he had moved to the United States in time, he would probably have risen into the pantheon of great discoverers. But in postwar Germany, he was tainted with Nazism and only barely acquitted in his denazification trial. Ultimately, he ended up writing for a German hunting magazine.


By Matthias Schulz
Translated from the German by Christopher Sultan
Posted by Bob McKerrow - Wayfarer at 15:33