This is one of the few notes I felt bad about writing. It is not good to abandon your mates who are out climbing. We were climbing in the remote Kohe Jalgye mountains of the Hindu Kush in Afghanistan, ;ictured below. 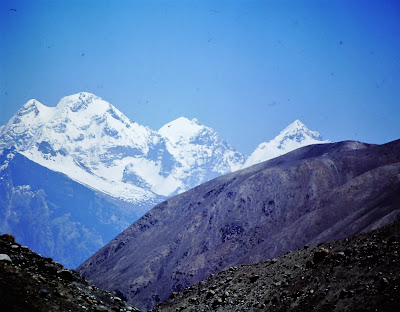 It was in June 1996 when the Talibans were closing in on Kabul and communities en route to the mountains, were very edgy towards us. Ross Evison and Mattias Luft set out to climb Kohe Jalgye but were late in returning to our high base camp. Bruce Watson and I who had climbed another peak the day before were waiting for them but had run out of food. 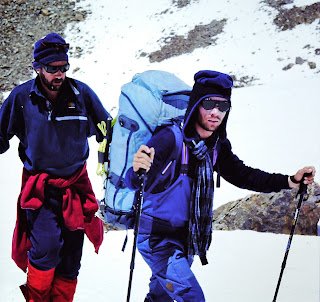 8 June 96.
Dear Ross and Mattias - With the good weather and limited food we have, we thought you would be back by now. Bruce and I have run out of food and had the last few raisins for lunch. As we don't know what has happened, we will descend to our last camp by the river. We have left all the gear you need plus first aid kit. We will buy a sheep from one of the local shepherds and kill it tonight. If you are not back by Midday tomorrow, we will come back up with a search party and a few legs of mutton. Hope to see you soon. Bob and Bruce.
Bruce and I got down to the river, found a shepherd willing to a sell a sheep, and butchered it. We put it on a spit and cooked it, but we were so hungry we ate it half raw, with fat dripping off our beards. We kept the best pieces for Mattias and Ross, and just before nightfall, we heard someone shouting. They had returned. We soon learnt they got to the summit and fell on the descent, and got knocked about. Four days later we were back in Kabul, drinking Russian Vodka, as the Talibans were bombing the hell out of the city.

This shows the strength of will-power, determination and to quit is not an option. They all returned to base-camp and feasted on lamb. In my book mountaineers are exceptional people. The world is the wiser because they are risk-takers for the greater good to humankind. Thank you for your courage and determination.

Thank you Paterika. Somehow I felt a tinge of selfishness in leaving them but all turned out well.

What an interesting story! You have a great blog! You write so well, I really like to read it. I think, if you had to write your essay, you would have done it wonderfully! In general, the psychology of relationships is a very fine line. You must determine for yourself who is more important to you- yourself or your friends. Since you need to pay a lot of attention to yourself. By the way, I recently read an interesting article on psychology on Pro-Papers.com.

It is difficult for me to gather ideas and express them on paper. I am thankful to writing services. I always hire a writer at https://elitewritings.com/. You can contact the service if you need quality paper. I always get top-notch and unique papers.