Who was Diamond Jenness? A great New Zealand anthropologist.

While New Zealanders fawned over the polar exploits of Scott, Shackleton and to a lesser extent, Mawson and Amundsen, a quiet and modest New Zealander was carving a career as an explorer and anthropologist in the Arctic starting in 1913. Over a career that spanned five decades, Diamond Jenness became one of the most distinguished anthropologists in the world.Born on 10 February 1886 in Wellington, New Zealand, Diamond Jenness graduated from Victoria College in 1908 and then earned a master’s degree in anthropology from Oxford University. In 1911, he won an appointment as Oxford Scholar to Papua New Guinea, where he studied the Northern D’Entrecasteaux for 12 months. Upon his return to New Zealand his life took an unexpected turn when the Anthropological Division of the Geological Survey of Canada invited him to the Canadian Arctic Expedition (1913–1918) to study Inuinnait (Copper Inuit) living in the Coronation Gulf region — a population that had had limited contact with Europeans up to that point.He gained national and international acclaim for his meticulous descriptions of early post-contact Inuinnait (Copper Inuit) life in the Coronation Gulf region — research he began as a member of the 1913–1918 Canadian Arctic Expedition. In addition, Jenness was renowned for his archaeological discoveries of the ancient Dorset and Old Bering Sea cultures. He published over 100 books and articles on Inuit-state relations, ethnology, linguistics, archaeology and anthropology, including The People of the Twilight. Taken together, his publications are considered one of the most comprehensive descriptions of an Inuit group ever written.Jenness spent the first year of the 1913-18 expedition on the Alaskan coast, learning Iñupiaq (an Inuit language) and conducting archaeological excavations on Barter Island. He travelled to Coronation Gulf in the summer of 1914 with expedition the CAE’s Southern Party, where he studied Inuinnait culture for the next two years. He learned another Inuit language, Inuinnaqtun, and acquired an extensive collection of material culture, took hundreds of photographs and made sound recordings of Inuinnait songs and oral traditions. For months Jenness lived as the adopted son of Ikpukkuaq, a respected hunter, and his wife, Higilaq, on southwest Victoria Island. As he observed and recorded his adoptive family’s seasonal movements and social activities, Jenness participated in the hunting and fishing on which their lives depended and mastered the difficult skill of travelling by dog team. The extensive observations he made of Inuinnait traditional life laid the base for his later work and defined his career. Upon his return from the Arctic in 1916, Jenness’ academic career was put on hold when he enlisted in the Canadian field artillery and served during the First World War.After the war, Diamond Jenness returned to Canada, married Frances Eileen Bleakney and took up a position at the National Museum of Canada in 1920. He was promoted to Chief Anthropologist six years later and sought to expand the museum’s anthropological research and collections. He performed anthropological fieldwork with Indigenous groups in Northern Ontario, Alberta and British Columbia, drafted legislation vital to the protection of archaeological resources in the Northwest Territories, and served as president of the Society for American Archaeology in 1937, and the American Anthropological Association in 1939. Amidst his fieldwork and administrative duties, Jenness began his remarkable series of publications, which included the popular The Life of the Copper Eskimos (1922), The People of the Twilight (1928) and The Indians of Canada (1932).In the mid-1920s, Jenness made his most significant contributions to the discipline of archaeology. In 1924, he examined a collection of artifacts found at Cape Dorset and Coats Island in Hudson Bay. Jenness concluded that the tool technology represented a new and distinctive culture in the Eastern Arctic, which he named Dorset. Although the academic community disputed his conclusion at the time, later investigations proved it correct. In 1926, his excavations at Cape Prince of Wales and Little Diomede Island in the Bering Strait resulted in his definition of the Old Bering Sea culture. Both discoveries significantly altered how scholars viewed the prehistory of the Arctic.Second World War and BeyondDuring the Second World War, Diamond Jenness served as Deputy Director of Intelligence for the Royal Canadian Air Force and chief of the Inter-Service Topographical Section of the Department of National Defence. After declining to serve as acting curator at the National Museum in 1946, Jenness organized and directed the Geographic Bureau in the Department of Mines, which collected geographic data on Canada. He retired from government service in 1948 and continued to research and publish extensively, including an economic history of Cyprus in 1962 and his five-volume work, Eskimo Administration, which explored Inuit-state relations in Alaska, Canada and Greenland.Jenness often tried to influence government policy towards Canada’s Indigenous peoples, even serving as special consultant to the Indian Affairs Branch in the 1930s, and became even more vocal following the war. He criticized the government for the lack of education and employment opportunities it offered to Indigenous peoples across the country, particularly in the Arctic. Jenness became a vocal proponent of assimilation, the abolishment of separate “Indian” status and the liquidation of reserve lands, believing that only these actions would allow Indigenous peoples to enjoy the full benefits of Canadian citizenship — ideas that foreshadowed the infamous White Paper of 1969. 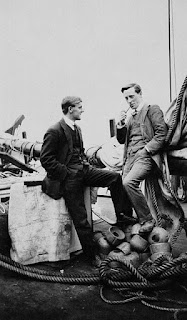 Photo: Diamond Jenness (left) and W.L. McKinley, magnetician and meteorologist, on board the Karluk, 1913. (RUDOLPH MARTIN ANDERSON / LIBRARY AND ARCHIVES CANADA
A kind, quiet, modest man, Jenness was the recipient of five honorary degrees and was associated with many learned institutions in Canada and abroad, among them The Royal Canadian Geographical Society, whose Massey Medal he was awarded in 1962. In the fall of 1968, he was appointed a Companion of the Order of Canada, his country's highest honour. Diamond Jenness Peninsula on Victoria Island was named for him, and in 2004 NASA used his name to identify a rock on Mars explored by the rover Opportunity.
In 1990 when I was editor on the NZ Adventure Magazine, I communicated with Stuart Jenness, Diamond’s son and bought a copy of a book he wrote about his Father. In 1985 I retraced part of the trip Jenness did along the Alaskan coastline in 1913, and visited sites he explored on Barter Island. Clearly New Zealand’s greatest polar explorer who is hardly known here. Thanks to the Canadian Encyclopaedia for permission to quote from various sources.Diamond Jenness (left) and W.L. McKinley, magnetician and meteorologist, on board the Karluk, 1913.
Posted by Bob McKerrow - Wayfarer at 17:51

This is exceptionally great information giving by your post, many thanks for setting aside the effort to share a particularly great post. We offer Essay Help & Homework Help facilities to students following all degrees and courses. Whether you're in primary school or following a Doctor of Philosophy, we have the best resources to deliver quality Assignment Help services to you.

This is exceptionally great information giving by your post, many thanks for setting aside the effort to share a particularly great post. We also deliver the best quality and within deadlines and we also provide Essay help in USA. We have an exceptional team of writers who will do your writing with utmost precision.

FileViewPro Crack can open any file immediately with Have you ever tried to open a file, but Windows doesn’t allow it? The reason why you cannot open your data is that you do not have the EXACT program to open this EXACT file extension.
Spectrasonics Keyscape Crack
Soundtoys Crack mac
Arturia Pigments Crack mac

Everything is very open with a really clear explanation of the challenges. It was really informative. Your website is very useful. Many thanks for sharing! 토토

This is a good tip particularly to those fresh to the blogosphere. Brief but very accurate information… Many thanks for sharing this one. A must read post! 경마사이트

Way cool! Some very valid points! I appreciate you penning this article plus the rest of the site is also really good. 온라인카지노

It’s difficult to find experienced people in this particular topic, but you seem like you know what you’re talking about! Thanks 토토