Reunited with my sea kayak 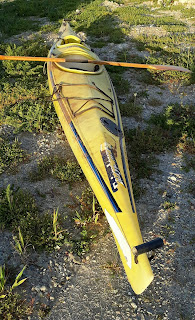 Reunited with my faithful Perception Chinook sea kayak after 24 years. I bought this kayak from Max Grant in Palmerston North in 1985 when I was Director of NZ Outward Bound School and used it constantly up until 1993 when I left for another 20 years working for the Red Cross, mainly in Afghanistan.. It took me across Cook Strait three times. A double-crossing with Adrian Kingi and a ten hour crossing from Raumati to Cape Jackson. It took me down the Waimakariri in the Coast to Coast, down the Wanganui in the 1st Mountains to Sea triathlon in 1987 and in many triathlons with a kayak leg. When based at Franz Josef I paddled a lot of the South Westland coastline and rivers, including the Waiho from glacier to Sea. When I left for Afghanistan in 1993 and worked for the Red Cross my daughters kept it and used it. I found my old wooden split Nimbus paddle in it. The only thing missing was the rear plastic hatch cover which I have recently found another. My daughters call my kayak 'Yum Yum Yellow' based on the tory that shares like yellow kayaks. 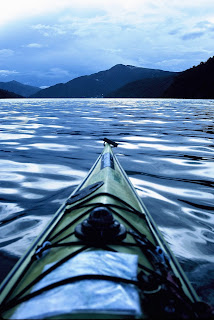 Above: I loved the compass, map on my deck which made it easy to navigate. (Photo Bob Mckerrow) 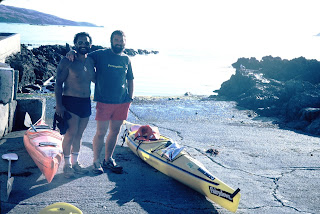 Above: Adrian Kingi (left) and me on the right, after a double-crossing of Cook Straiton on 9 February 1988..
Posted by Bob McKerrow - Wayfarer at 20:59

Wow, I really like it, this is a beautiful place. I remember We often went to the C site with the pay someone to write my assignment service group at the university and had a lot of fun.

Great post to share with audience like me. Happy Blogging. what will disagree in numerous software system programs is that the advanced tools & options that build making styles easier. Some software system programs do need additional leg work with the manual inputting of ‘stitch settings’ whereas others i'd contemplate ‘more advanced’ as they assist change the method & speed things up for you
best embroidery software
5 meilleurs logiciels de broderie
5 beste borduursoftware
5 migliori software di ricamo
5 mejores programas de bordado

This is quite a good blog. Keep sharing. I love them. Are you also searching for writing assignments for nursing students we are the best solution for you. We are best known for delivering nursing paper writing services to students without having to break the bank.

Your blogs are great.Are you also searching for Cheap Nursing dissertation Writing services we are the best solution for you. whatsapp us:+1-(951)-468-9855

Field Engineer is an online marketplace that connects businesses who have jobs with Telecom Engineers who have the skills and availability to complete them.

For more information about: field engineer

The email writing is considered one of the important way in the business communication. The growth of the companies cannot be sustained if the company does not implement effective communication. The email writing include the email address of the recipient and the subject for which it has been written.
Emailing a professor should be straightforward. You send emails all the time. Professional email etiquette is not something that is often taught which makes sending that first email all the more stressful. These tips will help you write my assignment that is appropriate and gets an answer.
Salutations: Start your email to your professor with a Dear or Hello. Hey is too casual for this situation and some professors also think Hi is too informal. The growth of the companies cannot be sustained if the company does not do taxation law assignment help. The employees may be discouraged and lose the opportunity to grow if they do not show good formal communication.
The Title and Name: The salutation must be followed by the professor’s title and name. This might seem overly formal to you, but it is an important way to show respect for your professor and their position and training. Omitting the title or using the wrong one could inadvertently offend your instructor.
Provide Context: Some professors have hundreds of students and may need some context to be able to place you and answer your question. This is especially true if you’re emailing them for the first time. The easiest way to help them figure out who you are is by telling them which of their classes you’re in and which day your class meets.
Keep it Short: Professors get a lot of emails so make sure your request is simple and to the point. State your question clearly so your professor doesn’t have to take expository essay help to figure out what you want. You can also cut down on the number of emails required to answer your question by briefly listing the steps you have already taken to try and answer your question.

My memories of that life are very sweet. I see those memories because I miss that life compared to my life now. I don’t live in the past I just see it a lot. But everyone can't reunite with its memories :(.

BIIT is very known and popular Computer classes in Laxmi Nagar. We provides highly professional trainee to our students at an affordable price. You can call on 9311441524 or can visit to A-115 , First Floor , Near Panna Sweet, Shakarpur, Vikas Marg, Laxmi Nagar, Computer Institute, Opposite Metro Piller No. 33, Delhi, 110092 to get more information.

Thanks for this amazing information and please keep writing on this type of topic. I will share this with my friends they will be happy to get this information.
My name is Skyla Wilson and I am a Dissertation Help Online provider in the UK. Scholars can connect to me on my site and get the best help from experts.

Your blogs are great.Are you also searching for Nursing assignment writers ? we are the best solution for you. We are best known for delivering great nursing assignments.

I want to always read your blogs. I love them Are you also searching for nursing pico essay writers uk ? we are the best solution for you.

Companies schedule downtime for many reasons. Some organizations simply like to keep track of how much time they spend working on various projects. Others choose to take advantage of the downtime to perform routine maintenance tasks.Network downtime

The new report by Expert Market Research titled, ‘Global Biochips Based In-vitro Diagnostics Market Report and Forecast 2022-2027’, gives an in-depth analysis of the global Biochips Based In-vitro Diagnostics Market, assessing the market based on its segments like applications, end-uses, and major regions. The report tracks the latest trends in the industry and studies their impact on the overall market. Recent advancements in biochip technology and increased investment in genomics and proteomics research and development programmes are major factors driving the global biochips-based in-vitro diagnostics market. Other than that, the rise in the geriatric population and their vulnerability towards diseases are driving the market. The major players in the market are Greiner Bio One International GmbH, SCHOTT AG, Randox Laboratories Ltd., PerkinElmer, Inc., and HORIBA, Ltd., among others. Expert Market Research provides highly skilled team of over 100 analysts and more than 3000 experts, to help its clients, ranging from Fortune 2000+ companies to small and medium sized enterprises, easily grasp the expansive industry data and help them in formulating market and business strategies. For more information about our services. You can visit our website.