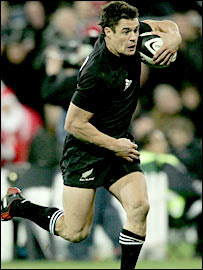 This is for you Fred.
You say my blog is boring so I will put the odd poem on rugby from time to time..
With the All Blacks about to teach South Africa a few lessons in rugby skills this Saturday, here's a poem about Dan Carter when he set a world record by scoring 33 points against the British Lions.
I was at the Johan Stauss Bar at the airport in Vienna when the game was being played.