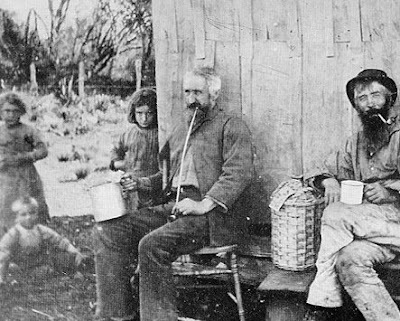 Charlie Douglas (centre of photo) lived on the West Coast of New Zealand from 1867 to 1916, exploring, surveying and mapping the mountains, bush, rivers, lakes and coastline. He was born in Scotland and for his outstanding work was referred to respectfully as Mr. Explorer Douglas. Charlie has been a great inspiration to me and figures prominently in my book - Ebenezer Teichelmann - Cutting Across Continents by Bob McKerrow tara-india research press - New Delhi. 2005
http://www.indiaresearchpress.com/ and distributed in New Zealand by Craig Potton Publishing.
Enjoy the poem
Charlie Douglas
So what was the inner spring that made you tick ?
In valleys where snow, ice, water and mica mix
Incessant rain and slippery logs
Mosquitoes, sand flies bush and bogs
And ah, paradise lurking in those hot pools
Stripped your rags far way from’ those fools’
As you soaked your matted beard and ropey hair
And a moment of thanksgiving, a silent prayer
Strong, sinewy and stringy as Weka meat
After years of amazing geographical feats
You lay awake, dreaming year after year
Many thought you were a man without a care
But you were putting the world together
While stranded for weeks in nor’westerly weather
Puffing, sucking the old brown brair
In your batwing tent you kindle a fire
No mortgage family possessions houses or barns
You are a free-wheeling man with only socks to darn
A river to cross and a range to measure
Keeping a watchful eye on the wild weather
Weeks of rain and sodden clothes
Notebooks full of maps, observations and prose
Your thrills came from discovery and not wiley tarts,
Betsy Jane at your side, obedient and fast

The tuis, bellbirds and robins kept you in song
Your footprints were the first in many places,
Mountain top, gorges river and glaciers
The whiskey jar at the Forks Okarito and Scotts,
Discussing the world with fellow Scots
The jar was your best mate on the binge
You were one of those living over the fringe

Banking almost got you, wife kids and all
But marriage to you was like a pall
Your dreams wafted like smoke from your pipe
Slabs of rata your company during the night
The cursed danps got into every joint
Did you ever ask ‘whats the bloody point ?'
Was it you Charlie or the others who were the fools ?
Your maps, sketches and diaries over which generations drool
No Charlie it was a good deal you got
Harper, and others, you never tolerated that lot
Alpine Club braggards you named them true
Canterbury amateurs who stole feats from you
It was Roberts McFarlane ,Bannister and Teichy
They were soul mates of a similar physie
Staunch and modest friends who knew your strengths
Overlooked your weaknesses and came to your defence
The final years in Hokitika with Mrs Ward
Wife of your mate in mountains who died at a ford
After the stroke you were seen camping at Kaniere
With batwing tent, maps, diaries but without a penny
Possessions and money had no meaning or dues
It was the uncharted land that was treasure to you.
Posted by Bob McKerrow - Wayfarer at 21:51