Deaths on mountains - Why ? 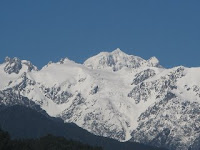 I have just finished reading two superb books, Last Climb by Breashears and Salkeld and Tibet - Life, Myth and Art by Michael Willis.

Books like these pull me out of my slothfulness and make me realise that my life is pleasant, despite a heavy workload. But it was John Mallory's words, written in 1999, that opened a floodgate of understanding.

He wrote: " I am proud of my son's achievement, and my father's. But I would so much rather have known my father than to have grown up in the shadow of a legend, a hero, as some people perceive him to be."

How poignant ! As I read and re-read this quote I thought of the dozen and a score of close friends I have lost on mountains. My closest friend ever - Keith McIvor (1973) Bill Denz, Gary Ball, Rob Hall, Howard Laing,(1966) Richard Tilley and my cousin Mike Cooper in 1967, Kevin Carrol, Archie Simpson, Chris Jillet, Noel Sissions, Mary Atkinson, Annie Kearsely, Jeremy Young, Hannalore Scmatz and many others. How many people said of them , " I wish I had of known my father, mother, son, daughter or the one I love ?"

It made me realise why am alive, and so alive. Good luck to some extent but I seldom pushed myself past a danger point which I perceived could kill me..... Had I kept on going on the North Pole trip I could have easily punctured a lung with a broken rib, I turned back on a number of peaks in the Hindu Kush, I flagged away dangerous looking grade 5 rivers as  I feared hidden branches brought down by recent floods that could have snagged me, and held me under for a watery grave.

Recently my climbing companion in Peru, John Lawrence reminded me of one of the most difficult climbs of my life when I was 20. John writes:

“Have you followed the Simpson/Yates story of their saga on Siula Grande? I met Simon Yates recently, and could scarcely disguise my distaste for his choices... do you remember that tense descent on Mellizos north face in Peru where on the way down we dodged streaming, chunky gulley avalanches by hopping sideways onto the comforting rockface, and sitting pegged to the granite for hours, huddled, hummingbird antics beside us, meanwhile nestling the image between our feet of welcoming red tents on the ledge way, way, way down below us... as I recall it, we set a little `roulette', or standard.... something like ten minutes with no big stuff, and five minutes with no stuff at all before we felt it safe to resume our descent down the steep couloir... furthermore, on that epic ascent up onto Pumasillo's N ridge (phew!)... my memory was of those awesome, apocolyptic faces beneath us on both sides of our tiny stances on that tottering crap of a ridge with no belays at all to speak of... and geez, no wonder they all said it would never be climbed... and to my knowledge still hasn't!! I would truly welcome your own take on your memories....”
Why an early death ? There are times we need to push ourselves beyond our own self imposed limitations but in our spontanaity, we need to assess the degree of risk we are putting in front of us.

The world, this life, the people, the pains, this delectable landscape and our families are so important. We have lived through the dangerous 20’s, the thoughtful and family 30's, and survived the roaring forties, and now the reflective 50’s.

What beauty there is in the world of people and families.

I'm very much inspired & encouraged by you as an extra ordinary personality - you have build bridges of humanity in the true spirit of humanity... above all your poetry's are too inspirational and mind blowing !!!