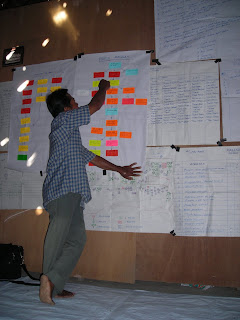 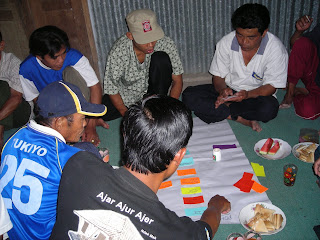 On Tuesday amd Wednesday ( 11 and 12 Sept. 07) I was in Yogyakarta monitoring some of the work we are doing with the Indonesian Red Cross in the aftermath of the hige earthquake which struck on 27 May 2006, killing 5,749 and injuring over 38,000 people. The Red Cross provided over 119,000 affected families were provided with relief packages including tents and tarpaulins by Palang Merah Indonesia (PMI) and the International Federation within the first three months of the operation.
Nearly 3,000 were provided with water and sanitation services, over 23,000 treated by PMI-Federation medical services while over 12,000 bamboo houses were constructed within eight months to meet the needs of the most vulnerable. The effectiveness of working with community cash transfers will now continue as an integrated community-based risk reduction pilot project, named COBA, in six villages. Training in the initial phase of thepilot project has begun.

Let me explain how our COBA project works.
COBA pilot project – integrated community-based risk reduction (ICBRR) in a recovery setting
The preparation phase for COBA has started with some training for PMI volunteers. Village mapping training and alternative media, using the simplest media tools, training have completed. Village mapping is an important part in
the risk- reduction process activity. This is a media to represent information of land surface and its surrounding.
This skill will enable communities to increase their awareness of their village and will play an important part in decision making on area planning programmes during disasters. Alternative media is also useful as a
communication media within the village community, PMI and other stakeholders such as local governments andother agencies.
Another important media tool is community radio which is being planned. There will be another training on community radio establishment and broadcasted programmes for volunteers to share knowledge and skills to identified resource persons in the village. This media is excellent for
information dissemination and working with the community will increase its sustainability.
Surveys will be conducted in the initial, middle and final phases to measure the programme’s effectiveness. In COBA,two type of surveys will be used: KAP (focus on the target village and non-target village as the control) and baseline
(focus on the targeted village only) surveys. A KAP (knowledge, attitude, practice) survey will be conducted, outsourced to Gadjah Mada University and Sanata Dharma University of Yogyakarta. The initial phase of the baseline
survey was completed recently by volunteers.
So for me, it was a wonderful experience spending time in the village of Mundon, watching this very empowering process for improved community development.