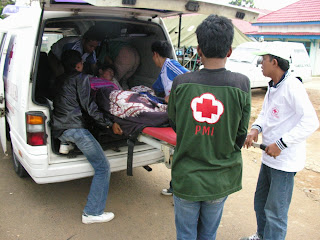 Indonesian Red Cross volunteers taking an injured woman to hospital
Here is the latest update on the earthquake in Indonesia
Indonesian Red Cross Society (PMI)
Brief summary of situation
After a strong earthquake struck the west coast of Sumatera with a force of 7,9 on the Richter scala on September 12th 2007, BMG (Meteorology and Geophysics Agency) reported that after 32 hours, 48 earthquakes with 4.5 – 7.7 magnitude on Richter scale, for which three tsunami warnings were promulgated even it was cancelled after two hours.

Impact for this earthquake reported in Bengkulu was 6 districts affecte: Bengkulu City, North Bengkulu, Mukomuko, Kapahyang, Seluma and South Bengkulu and North Bengkulu is the most affected district. It is reported that 10 people have died and 14 peoples injured, also reported 267 houses totally damaged, 3.119 houses sustained heavy damaged and 3.202 houses light damaged, and for public facilities, it is reported 17 schools building, 24 worship places and 12 offices building damaged, also reported airport in Bengkulu is accessible with small and medium aircraft, also road condition is possible to pass with motorcycle, car and medium truck with 7 tons capacity. Electricity in Bengkulu and some part of Sumatra were disturbed because electricity power plant were affected by the shock. In terms of health services for earthquake victims, M. Yunus public hospital officer in Bengkulu announced the temporary tents will keep serving for one week ahead.