Who was Tom Crean ? 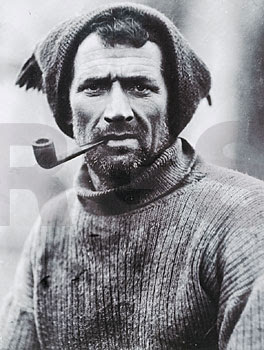 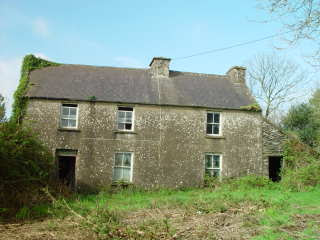 The house where Tom Crean was born.
I am truly delighted that Tom Crean has at last been acknowledged on stage throughout Europe, North America and many other parts of the world. by Aiden Dooley's one man play, Tom Crean Antarctic Explorer. If you live in Geneva it will be shown next months. See my previous posting.
I spent 13 months on Antarctica as a 21 year old and and visited the hut that Crean stayed in as a member of Capt. Scott's 1910-12 Terra Nona expedition when Scott and his companions died after reaching the South Pole. It was wonderful experience visiting the hut that was home to Crean and his comrades for two cold years. I would like to tell you a little about Tom Crean.

Tom Crean served both Scott and Shackleton and outlived them both.

Tom Crean (20 July 1877 – 27 July 1938) was an Irish Antarctic explorer. He was born in the town of Annascaul in Co. Kerry. He joined the Royal Navy when he was 15 years old, lying about his age to get in.
Tom Crean was on three of the four major British expeditions to Antarctica. Two of these were expeditions led by Robert Scott aiming (amongst other more scientific goals) to reach the South Pole: the 1901-1904 National Antarctic Expedition on Discovery and the 1911-1913 expedition on Terra Nova . The third was the Imperial Trans-Antarctic Expedition on Endurance led by Ernest Shackleton.

Terra Nova
On this expedition in 1911, Captain Scott said he could only really trust a handful of people, William Lashly, Edgar Evans and Tom Crean. Crean and Lashly, along with Lieutenant E.R.G.R Evans formed the last support party to leave Scott on his way to the South Pole, while Edgar Evans, Wilson, Bowers and Oates continued with Scott. Crean, Lashly and Evans turned back 146 miles (268 km) from the pole on 4 January 1912, and faced a 750 miles (1206 km) return journey back to the camp.
Around the beginning of February, Lieutenant Evans became seriously ill with scurvy. Starting on the 13 February, while still 100 miles (160 km) from the safety of the camp, Crean and Lashly had to pull Evans on the sledge, slowing the trio down further while their food supplies were getting dangerously low. Evans asked to be left behind as he feared all three would otherwise die, but Crean and Lashly refused (Evans would later say that this was the only time in his naval career where his orders were disobeyed). With 35 miles (56 km) left (4-5 days of travel with only two pulling the sledge), and not more than 1-2 days of food left it was decided one of the two had to walk for help while the other stayed behind with Evans. Tom Crean volunteered. It took him 18 hours to walk the 35 miles over the ice to reach the camp, and, with only three biscuits and some chocolate to eat, he collapsed just after reaching the camp at 3:30am on the morning of 19 February. He had arrived at the camp only half an hour before a fierce blizzard which probably would have killed him, and which delayed the rescue party by a day and a half. The rescue was successful however and Lashly and Evans were both returned to camp alive, unlike Scott's polar party. Crean and Lashly were both awarded the Albert Medal for saving Evans' life.

Endurance
Like Scott, Shackleton deeply trusted Tom Crean. After their ship, the Endurance, was destroyed in the ice during the Imperial Trans-Antarctic Expedition, the crew had to sail the life boats across the Weddell Sea pack ice and then travel by boat to Elephant Island. When they arrived, they rebuilt one of the lifeboats - the James Caird and six of the men including Shackleton and Crean sailed to South Georgia for help. This has become known as one of the most extraordinary small open boat journeys in history. Because they landed on the uninhabited south coast of South Georgia, three of the men, again including Shackleton and Crean, had to walk across to the other side in a remarkable 36 hour journey which was the first crossing of the mountainous island. They arrived at the whaling station at Stromness, tired and dirty, and prepared for the rescue of the other 22 men still on Elephant Island, 22 months after sailing from South Georgia.

Later life
After returning home, Crean saw service in the First World War, and retired from the navy in 1920. He married and opened up a small pub called "The South Pole Inn." Throughout his life, Crean remained an extremely modest man. When he returned to Kerry, he put all of his medals away and never again spoke about his experiences in the Antarctic. It has been speculated that this may have been because it was seen as dishonorable for an Irishman to have served in the British Military at that time. He became ill with a burst appendix in 1938. He was taken to Cork which was the nearest hospital where such a condition could be treated but he died before he reached the hospital there.

Legacy
Crean is commemorated in at least two place names: Mount Crean (2550 m) in Victoria Land, and the Crean Glacier on South Georgia.
Crean is also commemorated as the inspiration for Endurance Brewing's signature Pale Ale
He is also remembered in the 2001 TG4 Documentary 'Ciarraíoch san Oighir' (A Kerryman in the Ice).
Crean is portrayed, telling of his life and adventures, in a one-man play titled Tom Crean, Antarctic Explorer, written and performed by Aidan Dooley. The play premiered in New York in 2003, and has toured around the world, including a run Off-Broadway in the summer of 2007 at New York's Irish Repertory Theatre.
Posted by Bob McKerrow - Wayfarer at 17:20

your findings also the relevant details are mentioned at Abhi Tailor so it really makes sense.