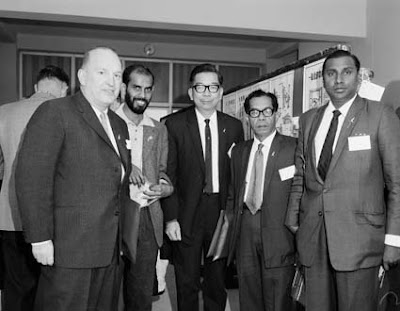 Dr. Kingsley Seevaratnam, 2nd from left (with beard) next to the then Secretary General of the League of Red Cross and Red Crescent Societies Mr. Henrik Beer, at the South East Asia Red Cross Forum in Sydney, 1963.

Dr. Kingsley Seevaratnam passed away peacefully at his home in Colombo, Sri Lanka in the early hours of Tuesday 1st April 2008, just a week out from his 73rd birthday. He has been unwell and hospitalised in Thailand in February due to heart problems, but recovered and insisted on returning to Sri Lanka.

He was fit Monday evening and spoke to friends during the evening. He passed away a few hours later in his bed. His wife Suppaporn was at his side.

According to the wishes of Dr. Kingsley his farewell will be low profile and no special tribute will be given, at least until after his funeral and cremation. His funeral will be held on Thursday afternoon, today, 3rd April, after the arrival of his children.

Kingsley was born on 8 April 1935 in Sri Lanka. He graduated with a Doctorate in Law from the Sorbonne University in Paris. He joined the Leaguie of Red Cross Societies (LORCS) in the early 1960s and rose through the ranks to become in charge of the Asia and Pacific region for around 15 years. Energetic, intelligent, with a dry wit, the cigar-smoking advocate will be remembered by so many people throughout Asia and Pacific where he worked for the Red Cross. He also will be remembered by friends and family in Geneva and Sri Lanka.

I can count Kingsley as a close friend who took me under his wing in 1975 when I arrived in Geneva to work for the LORCS. A year later he put me in Suva for 18 months as a regional disaster preparedness delegate covering 12 Pacific Island countries. I reported to Kingsley and he visited me in Suva on two occasions.

He received many awards for his achievements and the one I recall is a Medal of Honour from the Red Cross of South Korea in 1990.

He loved talking cricket and politics and debating was something he enjoyed. He wrote and spoke impeccable English and many of his juniors like me with English as our Mother-tongue recall having our draft letters marked and rejected because they were not up to the mark. As I write this I feel Kingsley looking over my shoulder waiting to correct my English.

I last meet Kingsley in Geneva in 2005 where we had an enjoyable lunch together. He still enjoyed his wine and cigars but complained the anti-smoking laws were forcing him into the closet. I will miss his dark mischievous eyes and white teeth smiling through a bushy beard. His pearls of wisdom I will miss too.

Rest in peace my friend.

Bob and your many friends from the LORCS in Geneva.
Posted by Bob McKerrow - Wayfarer at 18:31

I am Michèle Benguigui, a friend of Kingsley and i am surching the adress of suppaporn. Thank you. My email is ecrire@jeanlucbenguigui.fr.

Thank you for this article, really useful material.