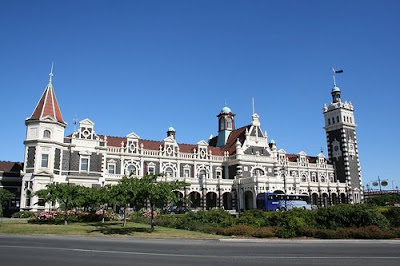 The dark gray stone walls of the Dunedin Railway station seemed to be gleaming. Shortly before midday the northbound train from Invercargill arrived. It was the 20th of March 1968.
Jill was there to say goodbye. The daughter of a Pukekohe onion farmer, studying physiotherapy in Dunedin, we had fallen for each other a month before. Ainslee, my older brother’s wife was there to farewell me. Two beautiful woman to say goodbye. My family, friends, a secure job : everything I had was in this City, but something was pulling. I had to leave. Dunedin, the mountains of Otago and Canterbury made up my world; I needed to cut the chain. The prison doors opened.

A mountain mule pack and a battered suitcase I inherited from my Grandfather pasted with rail and ferry stickers and a cheque for One Thousand NZ dollars in my back pocket was my world, my future......

A feeling of euphoria swept through me on the smoke filled platform. A great expanse of grey and stiffled light silhouetted Ainslee and Jill. The loudspeaker crackled, announcing the trains departure. I kissed Ainslee and hugged Jill and a thrill ran through my body. I heaved my mountain mule pack onto by back and boarded the train. I didn’t look back.

This battered pack was the symbol of movement and adventure. For three years the smell of its duck canvass and tarry waterproof oilskin top, evoked excitment everytime I packed it for another weekend trip into the mountains, or a three weeks pass hopping trip in the wilds of Fiordland, or a peak bagging trip to the Mount Cook region. Sometimes it might be an Otago tramping and mountaineering Club snow caving trip in the Old Man Range or a skiing trip with a busload of nubile young women, always a welcome interlude from serious climbing. I thought of Michael Cooper, my cousin who died last year climbing Mt.Awful at the age of 18. No wonder my mother didn’t want me to go to Peru. The year before that two other young Dunedin climbing friends of mine died; Richard Tilley and Howard Laing.

This was the station my father had departed from in 1941 for four long years in Egypt and Italy, and in the first World War my grandfather’s two brothers ( John Henry and Walter McNatty), and Stan Hodginson my grandmother’s brother left with his horse for the Boer war in 1898. John and Henry never returned, their bodies lie in Gallipoli and France.

As I sank into the leather seat, I fingered the cheque for NZ$ 1,000. If I lose this, I would lose my dream. Dreams are what drive me ! Gaston Rebuffat’s book which I repeatedly borrowed from the Dunedin Public Library until it became mine, said simply, ‘ I prefer dreams to memories. ‘

The first hour of the trip out of Dunedin was emotional. These were symbolic places. My first holiday was at Waikouwaiti with the Marret family, At Seacliff Mel Munroe the then NZ 100 mile record holder taught me what endurance was, Long beach and Waitati was where I learned to rockclimb. With visions of being a world 800 metre champion in the footsteps of Peter Snell, I attended three annual athletic camps based out of Karitane run by my coach Brian Taylor. I became an Otago champion snd record holder for 800 metres but not the world. Dreams...... My legs were too short and and didn’t have the leg speed according to Bill Bowerman the famous US athletic coach..

Later Moeraki passed by in a Stevensonian flash; where my ancestors had lived two centuries ago. I had run most of this coastline on cold Saturday winter’s afternoons, across still frozen ground, with the Mornington Harrier Club with Mel Munroe and the O’Conner boys and my friend Chip Dunckley, who died in 1999 at Palmerston.where he was the local doctor for many years.

I knew this coastline well. This was my land and my spirit is firmly rooted in it.

Explorers, surveyors, blacksmiths, ploughmakers, shoemakers, labourers, clerks. sailors. miners, bushmen, coal miners and strong sensitive woman linked me through the past 120 years across the water to the highlands of Scotland, to the rivers of Prussia, the theatres of England. My Auntie spoke of having Maori blood through the village of Colac Bay in Southland and my family tree shows I am related to Buffalo Bill (William Cody) and Charles Laughton, the Shakspearian actor. Perhaps, the most famous connection is to King James V, who the reputed McKerrow historian says we have descended from.

I started my wayfaring in 1968 and I have never stopped. 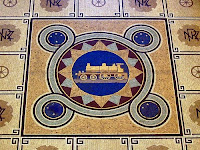 Many of the beautiful mosaics at the Dunedin Railway station
Posted by Bob McKerrow - Wayfarer at 17:53

Kia ora Bob,
I felt like I was there with you describing that huge moment, perhaps the defining moment of your life. I love that sense of the smoke filled platform.
Those moments in our lives when we recall every single detail.
I felt like that in 1993 leaving the states to move here under somewhat strange circumstances, and the vividness of my wait for the plane at lax airport seems only moments ago. Those colours and sounds right there now in front of me.
I look forward to reading
the next installment!
By the way, I met up with Pohangina Pete last evening and spent a few very enjoyable hours. I had met Pete once back in 2000 when I arrived at Iron Gates hut from a different direction. He was in from the road end for a day walk. Had a cup of tea and a chat and he headed back to his car, a 4 hours walk. I came across his blog this past year and last evening we met. The internet can be very intersting.
Ka kite ano,
Robb

It was certainly a defining or watershed moment when I left that railway station. It is similar to yours when you left the States for Aotearoa, but different time, different place.

Leaving by train leads me to one of the greatest books ever, 'A Fortune -Teller Told Me' by Tiziano Terzani, a HK based journalist who was told he would die in a plane crash in 1996 so he avoided air travel and travelled by land and ses for one year throughout Asia. He has an interesting take on railway stations as they have more colour, more character than airports which today have the uniformity of McDonalds.

Kia ora Bob,
You are right. The vividness of my moment was mostly my own heightened awareness, rather than the additional effect of memorable surroundings and also relevant people. The lax airport is a horrible place really, as is l.a.
I am off early in the morning for a trip to Top Maropea. I need even just a one day connection with the mountains. It has been too long, 3 months! Have a great day.
Ka kite ano,
Robb

Hi Bob What a great description of a great moment in your live. I can relate to it as we left Holland a long time ago for NZ. What a beautiful blog and an amazing life
you have.
I love Dunedin and its railway station. The people there are very nice too.
Thanks for visiting my blog. You make it hard as well for me not to return to blogging but I have other priorities as you know.
I will add yours and Patarika's blog though, just for when I get organised again.

So sorry that your duties will not allow you to attend the reunion in Aotearoa. Your blog is fantastic the visuals are awesome. I feel mighty refreshed whenever I visit your blog. Thank you my mate for sharing your treasured experiences.

Appreciate your feedback. I enjoyed your poems on the Rose and posted a comment, but it never appeared. Did u receive it ?