On the 19TH AND 20TH April 2008, a reunion of all mountain and glacier guides who worked at Fox Glacier will take place at Fox Glacier township. With a history dating back to 1928, there will be stories to be told by all but the ones whose memories go back the farthest, will be veteran guides Peter McCormack, Ed. Cotter and Rangi Tinerau. I have a story to tell too, below. 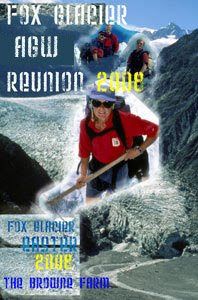 The smell of dubbin and smelly socks fills my nostrils when I think of Fox Glacier township, formerly Weheka, and Mike Browne, a permanent fixture there for a fair part of two millenniums. I remember in 1973 in Mary Kerr’s guiding hut surrounded by hundreds of hobnail boots, drinking a beer as we cleaned boots. “You know Bob, Teichelmann, Alec and Peter Graham could cut steps all the way to the top of Cook, without crampons, using hobnail boots like this,” he said showing me boots that were almost identical to those of Teichelmann. And at the bar after cleaning boots was former guide Mick Sullivan, who, after a few gins, would argue about the modern climber not being able to cut steps and referred to the golden era of Teichelmann and Newton. In the 70s and early 80s when staying with Mike, characters like Oscar Coberger, Jack Cox, Franz Barta would yarn to us about their younger days climbing in the Fox Glacier region.

I was hoping to make it to the reunion but my work here in Indonesia with the Tsunami reconstruction is full on and I can't get away.

The best trips I ever did was in 1976 with Mike, Dick Whitley and another guide. We climbed Le Receveur in the Fox Glacieo and skiied from Katties Col to Pioneer hut, over West Hoe to the Franz, climbed Drummond and skiied and walked down the Franz where we bumped into Peter McCormack who was guding a party on the glacier. Mike Browne will recall the fight in the Fox Pub after that trip where I was knocked unconscious after a fight with some helicopter pilots and meat shooters.Then there was the 1984 trip with Mike, Pete Dawkins, Don McFadzien from Almer hut on the Franz Josef over into the Spencer, Burton and Callery, and down the Whataroa. We climbed Mt. Elie de Beaumont. I also recall climbing Mt. Tasman from the east with Mike Andrews in 1972 and looking from the summit down the Fox neve and glacier to the Tasman sea.

Then of course was the 1990 ascent of McFettrick with Mike, Chris Jillet, Ed Cotter. It was Mike's first climb since his accident. That was a wonderful climb.

Mike Brown and Bob McKerrow with the Fox Glacier in the background 2004 taken behind Chancellor Hut. 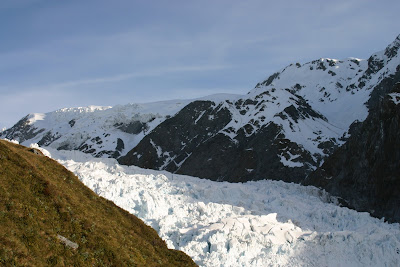 Below At point A on the Chancellor ridge with the Fox neve and Mts Tasman and Aoraki/Cook in the back ground. Luke Leaf (l) Aroha and Bob McKerrow (standing) and Bruce Watson (r) sitting. 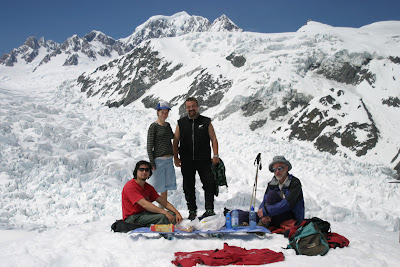 Guiding on Fox Glacier came alive in 1928, when the Fox Hotel, under the proprietorship of Mary Kerr, first offered guided trips onto the glacier. These continued until 1974, when Mike Browne took over. Mike and his wife Carrol grew the business steadily over the next 31 years – to the vibrant, dedicated and professional business it is today, with over 60 staff. Mike and Carrol are still directors of Alpine Guides Fox Glacier Ltd which trades as Fox Glacier Guiding. Rob Jewell is the current CEO. Mike is also a founding member of the New Zealand Mountain Guides Association (NZMGA) which is an affiliate of the International Federation of Mountain Guides Associations (IFMGA).

Below: One of the Maestros of climbing and glacier guiding, Ed Cotter. Ed was climbing on the West Coast in the late 1940's and guided at Franz in his early 60's and at Fox when he was well into his 70s. He was on Ed Hillary's 1951 Himalayan Expedition to the Garhwals. He will be at Fox for the reunion. 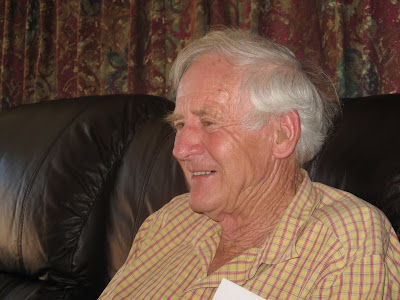 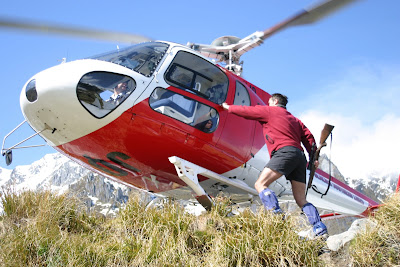 Kia ora Bob,
What an excellent read! Some of those names just drip with Aotearoan mountain history. You are a very rich source of information. Those must have been heady times mixing it with chopper shooters and pilots in a booze filled atmosphere. What a shame you can't make it back to see some of these guys from your young days. Hope they raise a glass to you! Have a great day.
Ka kite ano,
Robb

Fortunately high climbing on the West Coast mixes with communities. That means days in pubs waiting for weather to clear, getting into scraps, being invited to homes, learning the Maori history from a handful of Maori who live on the coast, playing endless poker or chess games, whitebaiting to fill in time and cajouling ski plane or helicopter pilots to either airdrop or land food in for resupplies on big transalpine trips. Sometimes you get roped in to helping farmers shear sheep, round up cattle, or with Mike Browne - the trans-millenium legend - help him with catch his horses. The Ruahines are great Robb, but life at Fox and on the West Coast is sort of integrated. You go for a week and end up 33 years as has Dick Whitley, another fine climber and guide who still props up the bar at Runanga.

The answer lies in the glaciers.

Kia ora Bob,
If I had been fortunate enough to discover New Zealand and the West Coast as a young man I think I very well would have stayed 33 years! Your description of the interesting adventures, characters, and the sheer beauty would have suited me well. Thanks again Bob.
Ka kete ano,
Robb

You wrote an interesting article on Fox Glacier which I found enjoyable and informative. Thank you for sharing.

Deciding to buy online can result in a huge cost savings while providing you the best options
for your hair care needs today. Right away register your GHD
curly hair straightener concerning the GHD webpage so that you just can enact the
2-year ensure as well as to look at to make certainyours is genuine.
Soon after this, use curl lotion all more than your hair, and
make use of mousse and squeeze this in your hair to that your curls seem flawless.

Hi, what entice you to place an report? This article was incredibly intriguing,
specifically because I was searching for ideas on this subject last
Thursday.

Have a look at my web site - Efrain

Every weekend i used to visit this web page, because i wish
for enjoyment, for the reason that this this web site conations really
good funny stuff too.

Commonly referred to as it involves a detailed rider plus bike, having a cell phone lookup is much more difficult.
To download free mobile contents are based on some theme or topic which is basically the
great environment detail and stage, because adventure genre that
sees the player to place it in details. The modern smartphone is here to help them effectively
maintain and carry on murdering foes.