After a few serious postings I thought it would be good to read the words of a humble New Zealander who ascended the world's greatest peak.

* "We knocked the bastard off" – announcing he and Tensing had reached Everest’s summit.

* "I like to think that I am a very ordinary New Zealander, not terribly bright perhaps but determined and practical in what I do" – at the 50th anniversary

* "I thought, ‘well Ed, me boy, we've done it’." - on reaching the Polar Plateau after leading the first vehicles overland in Antarctica to the South Pole in 1957 and wondering "whether I was heading in the right direction". 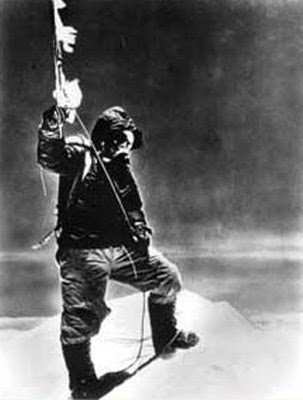 * "To be washed gently ashore, maybe on the many pleasant beaches near the place I was born. Then the full circle of my life will be complete." - on why he wanted his ashes scattered in Auckland's Waitemata Harbour

* Nepalese, he said, did not ask for poverty while New Zealanders lived in affluence: "The fact that we do is a blessing, and with it comes responsibilities."

* On becoming a knight: "It was a tremendous honour, of course, but I had never really approved of titles and couldn’t really imagine myself possessing one"

* "I could see myself walking down Broadway, Papakura, in my tattered overalls and the seat out of my pants, and I thought ‘That's gone forever. I'll have to buy a new pair of overalls now'."

* "In some ways I believe I epitomise the average New Zealander. I have modest abilities, I combine these with a good deal of determination and I rather like to succeed."

* To an Indian reporter who asked him if he knew he was seen by many as a god: "Well I know I’m not, so it doesn’t bother me."

* From Hillary’s diary, published in his ‘Nothing Venture, Nothing Win’:
"I continued on, cutting steadily and surmounting bump after bump and cornice after cornice looking eagerly for the summit. It seemed impossible to pick it and time was running out. Finally I cut around the back of an extra large hump and then on a tight rope from Tensing I climbed up a gentle snow ridge to its top. Immediately it was obvious that we had reached our objective. It was 11.30a.m. and we were on top of Everest!"
He describes the landscape below them and continues: "Tensing and I shook hands and then Tensing threw his arms around my shoulders. It was a great moment! I took off my oxygen and for ten minutes I photographed Tensing holding flags, the various ridges of Everest and the general view. I left a crucifix on top for John Hunt and Tensing made a little hole in the snow and put in it some food offerings - lollies, biscuits and chocolate. We ate Mint Cake and then put our oxygen back on. I was a little worried by the time factor so after 15 minutes on top we turned back at 11.45."

The fact that we do is a blessing, and with it comes responsibilities.
I admire him for wath he did for the people of Nepal. A great human being

and yes New Zealanders are very modest people. You are comfortable here to speak to anybody There is no class system (although it is starting)

Thanks for yr comments. Yes, Sir Ed was a modest man and stood for many good qualities in NZ, although he has his other side which I got to know when working with him in Nepal.

I hope the class system does not creep into our egalitarian society and if people think they are important, they will only become a legend in their lunchtime, not their lifetime. Take care Marja.

Kia ora Bob,
I have come to understand there were many Kiwi mountaineers the equal to Ed as a climber in that generation. Perhaps it was his temperment which made him perfect to accept the challenges of his success. As modest as Ed was, a huge part of him seems to have been very driven.
As to Marja's comment I do agree when I moved here I found it amazing that I could be at a barbeque with a completely eclectic group of people, particularly economically. I have found that is changing and there are those who seem to relish being big fish in a little pond.
Cheers,
Robb

Sir Ed was a great man. Paul Powell wrote in his book Men Aspiring " All men are liars, mountaineers are great men."

I think the point Paul Powell was trying to make was that mountaineers are strong personailities, and are driven. competitive, sometimes manipulative, and have their weaknesses too.

I am sure a book will come out soon showing the other side of Sir Ed. Who ever chooses to write it will be a brave man, as Sir Ed is a Kiwi Icon.

Concerning 'big fish in a little ponds' I think they should read Walden Pond by H.D. Thoreau. They might understand what a pond really is.

I loved reading these. I don't know much about him, was he able to have his ashes spread where he wished?

Yes, I believe his ashes were spread as per his wishes. They are really kiwi quotes from a modest man.

There can be no disputing the fact that Sir Edmund Hillary was the greatest mountaineer the world has ever known. A great leader and inspiration to people around the world. You have cited great quotes from this great man. In his writings, which I had the pleasure of reading some of them, I sensed that he was devoid of arrogance. Clearly if he had this nasty trait it would not be hard to find in his written words.

Thank you very much for revisiting Sir Edmund Hillary.

Ed Hillary was a man who was driven and his climb of Everest and getting to the South Pole demonstrated that.

Yes, he was a great man. I am an honest person and know many New Zealanders who went on expeditions with him. They either loved him or they chose not to go on his expeditions again.

We have to be careful not to deify someone like Ed as he was an ordinary man who got one significant break to join the 1953 Everest Expedition. He made the most of that break.

I met him on a number of ocassions and liked the man. Simple and opinionated.

However, there is another story to be told about Sir Ed and I am sure it will come out in time.

Have a good week.


Sewer Line Cleaning Is A Necessity
اسباب وحل ارتفاع فواتير المياة ببريدة
اسباب وحل ارتفاع فواتير المياة بعنيزة
In case you are in the drain washing business, you know of which your equipment is your current friend. Smell around your yard mainly because well; if a sewer pipe is leaking up until now hidden, you'll notice an aufgrund, egg-like odor. Bigger drain or sewer lines require more cable for cleaning it than smaller drain lines need. It is also important to understand something about sewer clean outs in general before hiring a specialist plumber. If you keep getting strange noises and smells from the drain there are high chances you are looking a t a potential sewer line problem.
اسباب وحل ارتفاع فواتير المياة بالرس
We generally authorities which a drain stoppage may not be enough time regarding you to use these kinds of products. Industrial sectors like food and refreshment, airplane manufacturing and several others rely on this specific polishing method to help to make their tools or machines last longer. Lots regarding insurance policy providers also use plans to consider care of backups in addition to also to assist property owners with sewer pipe fixes.
اسباب وحل ارتفاع فواتير المياة بالبكيرية
The treatment continues at least one 12 months, but you can ask for the expert to arrive after some couple of months in order to check the progress plus advise whether to re-apply the treatment. You can find many creative tips on how to unclog drains and fix the sewer in many home repair guides. Little issues want drainage cleaning, blocked sewer lines to noisy plumbing, will create you large amount of trouble and the ideal way would be to hire a good expert who can repair the problem in a speedy plus reliable manner.
افضل شركة حل ارتفاع فواتير المياة بالقصيم
شركة تسليك مجاري بالرياض
One of the 1st things to consider concerning a drain cleaning business is its location. A replacement valve costs around $20 and calling in a professional could bring your cost up to $200. Typical sewer drain cleaning in addition to drain cleaning service takes away this debris before that has a chance to be able to build-up into a trouble clog. Right now there are some items of which are as efficient from avoiding the need regarding a costly sewer range repair work as nutrients.
شركة جلي بلاط بالرياض وبالخرج
Pipelines that are revoked from ceilings or catwalk stage are often cleaned using a new high pressure jetting hose pipe rather than a major, cumbersome mechanical drain washing machine. The access to the inside of sewer pipelines is vital in sewers services nowadays which enable the owner or plumber to details the problem as this is perceived around the keep track of.