Back in Bangkok with my dreams and memories

Pavements, people jostling, food smells, colour, feeding frenzies, hawkers, glances, stalls, snaking traffic, hoardings, hustling, clanking noises, laughter,... Over 34 years since I first came here. Bangkok has been a refuge to me, a balm for my burnt out body after long missions in Vietnam, Afghanistan, Bangladesh, Pakistan, Nepal and Cambodia.

It is a place I have cried for lost friends…..

Every visit is a mixture of dreams and memories

It was March 1975 I accidentally came here under tragic circumstances. I was working for the Red Cross in Geneva early March 1975 when I got a phone call from the New Zealand Red Cross to say that Mac Riding, leader of the NZ Red Cross team in South Vietnam, was missing on a flight from Vientiane Laos, to Saigon. An ICRC doctor, Dr. Surtzeneger was also on the flight. I was asked to fly to Saigon and find out about the missing flight. I spent 10 frantic days in Saigon trying to find out from Air Vietnam, the NZ Embassy and the Government what had happened. The reply was that it was shot down by North Vietnamese or Viet Cong troops who were slowly taking South Vietnam, not far from Pleiku. I tried to travel to the scene but advancing troops prevented that. 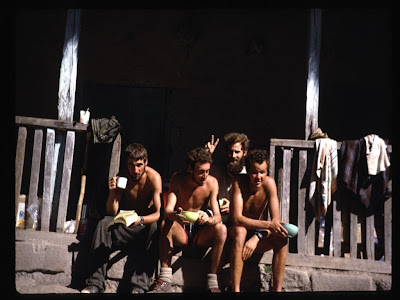 With Mac Riding in Peru 1968. Mac is the bearded guy in the back row, giving the V sign. I am the young guy on the left with a mug in my hand. Photo: Bob McKerrow

Mac and I were on a New Zealand mountaineering expedition to Peru in 1968, and then when I was leader of a NZ Red Cross refugee welfare team in 1973-74, Mac was a team member. When I left Vietnam to work in Geneva, Mac Riding took over from me as leader.

While I was in Saigon gathering information on Mac’s disappearance, the North Vietnamese were rolling south, capturing, Da Nang, Hue, Nga Trang, Khontum, Pleiku, Nga Trang. I left a matter of days before the fall of Saigon and flew to Bangkok. 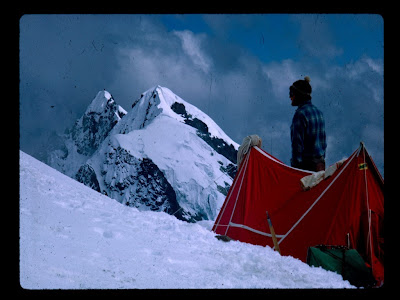 Some of the peaks in the Peruvian Andes I climbed with Mac Riding.


This was my first visit. I was sure Mac Riding was dead. I found a cheap hotel and remember sitting outside, grieving for him.

As the night wore on I relived all the first ascents of those high Peruvian summits we did together. We had both been to Antarctica and enjoyed running the Scott Base huskies. In 1973-74 we worked together resettling refugees in the central highlands of Vietnam together. Ocassionally we talked of death, and who might or might come to our funerals. Death was never far away as we courted fate on mountains, Antarctic ice and war zones.

Pretty bargirls tried to comfort me but I was in another world drowning my sorrows in Bangkok. Memories flooded back of Mac and I being arrested in the Amazonian Urabamba river region of Peru, as we both had beards and the Guadia Civil thought we were supporters of Che Guevara, who had recently been executed in Bolivia.

That is my first Bangkok memory. Since then Bangkok has been a transit airport for me between NZ, and India, NZ and Afghanistan and other places. And now it is a place we have our regional meetings. Often I sit outside in the pavement cafes and dream of the future. There are so many journies yet to make.

It was here in 1994 that Jom and Fabio from the ICRC, and I met up after a draining time in Northern Afghanistan. On 1 January 1994, a huge battle broke out in Mazar I Sharif in Northern Afghanistan between two warlords and over 30,000 women and children were rendered homeless. It was minus 15 degrees centigrade and women and children had fled the fighting during a snowstorm to Mosques and schools, without shoes or warm clothing. Many were suffering from hypothermia and frostbite. The three of us negotiated for a three hour ceasefire so we could distribute clothes, food, blankets and equipment to cook food and tea.

For the next few months we were extremely busy running a huge relief operation for a growing number of displaced people.

Fabio, Jom and I met up in Bangkok at the end of 1994. Jom, from Belgium, a very gallant Red Cross worker, died of HIV and AIDS a few years later. I think of him a lot.

Then in 2002 Dr. Bo Kwye from Myanmar, died in Pakistan. He was medical adviser in our South Asia regional delegation. I remember working with a young Pakistan Red Cross volunteer preparing his body for the return journey home. We took his body back to Burma via Bangkok.

I even courted a beautiful English woman here when I was very young, very romantic. At first she doubted my sincerity and said, “if you really care for me, you’ll meet me under the biggest Chandelier in South East Asia at 8 pm this evening.”
Knowing very little about Bangkok, I rushed from hotel to hotel, then to a small museum, where I was told the location of the biggest chandelier in SE Asia: in a hotel in Bangkok. I arrived at 7.55 pm with a huge bunch of orchids, a box of chocolates. I remember walking through a night bazaar and she said, “I don’t like your T-Shirt,” and she proceeded to buy me a beautiful Thai silk shirt.

Chandeliers, chocolates, silk shirts…..after a wonderful dinner overlooking the river, we danced the night away

I remember returning to Bangkok after spending 3 years in Afghanistan in late 1996, buying Michael Jordan T Shirts and jewellery for my daughters living in New Zealand.

I wrote many poems in bars and parks in Bangkok, and one which compares the city of Kabul to the city of Bangkok, is my favourite. It was published in my book on Afghanistan, “Mountains of our Minds.” I will post it next week.

Back in Bangkok with my dreams and memories, but you know, I prefer dreams to memories. Bet on it !

Kia ora Bob,
Tonite I shall gaze up at the setting suns shadow upon Mt. Taranaki and raise a toast to your not forgotten companions, your memories, and your dreams. Kia kaha my friend.
Aroha,
Robb

Thanks for remembering my old friend Mac, and other compoanions.
They would appreciate being remembered on the heights of Taranaki. Kia Kaha!
Bob

Likewise Bob, thinking of you and all the other Red Cross workers out there now and in the past, and all the good that you have done in our small world.

Hope all is well with you. Thanks for your sentiments. Much appreciated. Bob

Kia ora Bob,
Couldn't see the mountain but I raised my Irish whiskey up that way and thought of you and your companions fighting the good fight. Kia kha.
Aroha,
Robb

I hope you can see the mountain today. I am enjoying Bangkok and sampling a few wines. Cheers

This is yet another beautifully written blog. Many images came into my mind as I read your chandelier moment and I kept smiling as I read between the line. You are always as your best in mixing the serious with clever witticism without losing sight of the main threads of the theme.

Well, Bob I thought that the poem on page 22 of your book, Afghanistan Mountains of our Minds was your favorite, as it is mine. In the lines of the second stanza you have captured in a profoundly poetic way the country of your birth: the strength, boldness and tenacity of its people. Tell me I'm correct on this. Actually, to my way of thinking this poem is at the core of what you have done in past life and what you are doing presently.

i think you are correct. I should have written that the poem was one of my favourites, not my favourite. Yes, the theme poem on page 22 is my favourit, and one I anchored many around.

When writing it, I didn't really think about NZ, but I guess you hit on the sub-conscious thoughts that come through. Sometimes I bleed when I write as I have seen so much pain, suffering and exploitation.

I deeply appreciate your feedback.

You went through a lot and your soul has been hurt greatly by great losses. You achieved however a lot in life and good to see you had some lights as well Look forward reading the poem Take care

Hi Marja - Always a pleasure to get your feedback. Yes I have had some hard times but as you note, there have been many highlights and rewards that keep you going.