My lasting posting gave details of the grave humanitarian situation in Pakistan. We have just launched an appeal to help the Pakistan Red Crescent Society in its work assisting the displaced people. 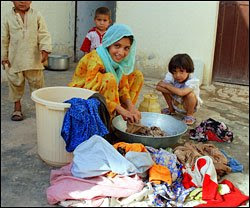 The International Federation of Red Cross and Red Crescent Societies (IFRC) has launched an emergency appeal seeking 23,926,179 million Swiss francs (22.44 million US dollars or 15.76 million euro) to help the Pakistan Red Crescent Society (PRCS) meet the humanitarian needs of 140,000 people displaced from the areas of fighting.

Latest reports suggest that more than 2 million people have fled their homes, making this the largest and fastest growing displacement in 15 years. The majority of the displaced people are now staying with host families outside the areas where hostilities are occurring.

Pakistan is currently facing a growing humanitarian crisis triggered by fierce fighting between government security forces and militants. There was an increase of around 100,000 displaced people in the last ten days of May alone. This growing displacement illustrates the uncertainty of the timeframe of these hostilities and illustrates the massive humanitarian needs that exist, both for the displaced and the families who are sheltering them.

“Seeing the magnitude of the problem, it is urgent that all Red Cross and Red Crescent partners join hands together to help the people,” says Ilyas Khan, PRCS secretary general.

Since the end of April, in addition to the direct implementation of its own assistance programmes, the International Committee of the Red Cross (ICRC) has been actively supporting the PRCS emergency response. These operations aim to address the needs of civilians, focussing on the sick and wounded and the displaced in the Mardan, Swabi, Malakand, Dir and Nowshera districts.

The PRCS plan for an International Red Cross and Red Crescent Movement response will support around 400,000 displaced people in the emergency phase of the operation,some 50,000 people in camps and 350,000 staying with host families.

Within that plan, the IFRC emergency appeal will complement the PRCS and ICRC joint efforts through timely response to 70,000 internally displaced people (10,000 families) in non-conflict areas during the emergency phase and another 70,000 (10,000 families) will be supported for early recovery. Support will be focused on those staying with host families, but this appeal will also enable the PRCS to provide services in one camp that is outside of areas where fighting is occurring.

“With the humanitarian crisis growing, the needs have become far greater,” says Pepe Salmela, head of the IFRC in Pakistan. “The uncertainties regarding the ongoing clashes, as well as its time frame, add to the urgency for a timely, well-coordinated, and efficient humanitarian response.”

The timeframe of this operation is to the end of 2009.
Posted by Bob McKerrow - Wayfarer at 02:22

do you have a link where people can make a donation straight for these people or do you just donate to the Red Cross?

Thanks for your feedback, concern and willingness to do something about the situation in Pakistan.

or go to the new Zealand red Cross website.

I am at the Jakarta airpoet en route to Bangkok.

Generic Viagra (sildenafil citrate; brand names include: Aphrodil / Edegra / Erasmo / Penegra / Revatio / Supra / Zwagra) is an effective treatment for erectile dysfunction regardless of the cause or duration of the problem or the age of the patient.
Sildenafil Citrate is the active ingredient used to treat erectile dysfunction (impotence) in men. It can help men who have erectile dysfunction get and sustain an erection when they are sexually excited.
Generic Viagra is manufactured in accordance with World Health Organization standards and guidelines (WHO-GMP). Also you can find on our sites.
Generic Viagra is made with thorough reverse engineering for the sildenafil citrate molecule - a totally different process of making sildenafil and its reaction. That is why it takes effect in 15 minutes compared to other drugs which take 30-40 minutes to take effect.
[b][/b]
Even in the most sexually liberated and self-satisfied of nations, many people still yearn to burn more, to feel ready for bedding no matter what the clock says and to desire their partner of 23 years as much as they did when their love was brand new.
The market is saturated with books on how to revive a flagging libido or spice up monotonous sex, and sex therapists say “lack of desire” is one of the most common complaints they hear from patients, particularly women.

I really like your blog.. very nice colors & theme.
Did you create this website yourself or did you hire someone to
do it for you? Plz reply as I'm looking to design my own blog and would like to know where u got this from. thank you