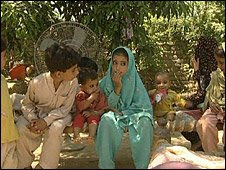 I saw the birth of the Talebans in early 1994 when I lived in Afghanistan and had to work closely with them in order to get assistance to vulnerable communities in remote parts of Afghanistan. Then when 9/11 occured, I was back in Pakistan heading a large operation for Afghan refugees who fled into Pakistan. Again in October 2005, it was a disaster of a different kind, a huge eathquake in northern Pakistan, killing 80,000 people. And over the past we have witnessed another huge humanitarian crisis in Pakistan that I followed through a blog of a young teenage Pakistani women who recorded the horrors unfolding on her blog from the Swat valley on the BBC website. Today, modern technology allows you to read the terror first hand. If anything, it makes me feel more helpless when I read of a young woman caught in the crossfire of a major battle and sees people being killed and murdered all around her. I suppose what warms my heart is I know the Pakistan Red Crescent, the ICRC and the IFRC are doing everything possible to assist the displaced people. 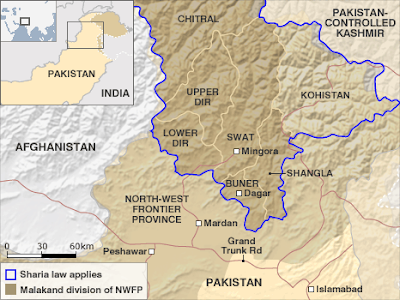 My good friend Joe Lowry writes : "One of the biggest exoduses of modern times is under way in Pakistan. Two and a half million people have been displaced - a dozen times the populaiton of Geneva, and yet we hear relativley little about their plight in this "little Switzerland". Check out this blog
http://headdowneyesopen.blogspot.com/2009/06/shame-of-swat_01.html

The International Committee of the Red Cross yesterday (31 May) gained access to Swat valley for the first time since hostilities began. Their team reported hospitals lacking the barest necessities - we're talking without water or electricity - in an area where people are most likely receiving horrific injures, and suffering from food shortages and waterborne diseases.

Nothing is getting in, not even the spoken word, as phone lines are down. Mingora has obviously been a scene of carnage. The footage coming out evokes Mogadishu, and the "theatre" must be as dangerous for the aid workers going in as it was in Somalia back in the early 90s. To them, chapeau, and sincerest wishes for their continued safety.

On the 3rd of June we got this statement from the UN.
Without the contribution of urgently-needed funds, the United Nations and its partners will only be able to feed the 2.6 million Pakistanis forced to flee clashes between the Government and militants for the next month or two, it was announced today.


According to the UN Office for the Coordination of Humanitarian Affairs (OCHA), the world body has less than half of the $280 million sought to meet the food needs of internally displaced persons (IDPs) in Pakistan.
In addition, the $543 million Humanitarian Action Plan launched late last month is only 22 per cent funded. OCHA also warned that current stocks of essential drugs will run out by the end of this month. There is already a shortage of hygiene kits and soap in all camps housing some 200,000 of the uprooted, it added.
The World Health Organization (WHO) said today that the portion of the Action Plan dedicated to health needs is only 11 per cent funded.
There is a high risk of communicable disease outbreaks due to overcrowding, contaminated water, poor sanitation and inadequate health care provision, among other factors, WHO said, cautioning that a funding shortfall will impede abilities to protect people from disaster.

This is a tragic situation and I hope and pray the Red Cross /Red Crescent and the UN save the situation worsening.

Cheers Bob. Can you stick a link into the piece to direct people to HDEO please? There's anothre post up todya you may be interested in, on neturality

Interesting that you helped the afghanistan people to flee.I just read the amazing book A thousand splendid suns which perfectly tells the story how life was under the taliban and how people from kabul flew over the border to Pakistan to end up in a refugee camp.
Just a glimps of life over there but basically important for us to
create awareness

I have obeyed your instructions. The link is now in. It is a provocative blog and i enjoy it, and learn a lot from it. Thanks mate. Bob

thanks for your comments. A Thousand splendid Sons was a very moving book, as was the kite runner.

It is important we all, Joe, Paul, you and I, keep promoting what is happening in Pakistan and why ?

Yes Bob and you are doing a great job. A friend of my did a great job as well Come and watch a video on my side

Thanks marja. Now i have a weekend at home, I will watch your video.
Bob

Hi there, just became alert to your blog through Google, and found that it's truly informative. I am gonna watch out for brussels. I'll be grateful if you continue this in
future. A lot of people will be benefited from your writing.
Cheers!
My web site > naked girls

Hurrah, that's what I was searching for, what a material! existing here at this web site, thanks admin of this site.
Here is my web site - porntube

Why visitors still make use of to read news papers when in this technological world all is
existing on web?
My web site: www.teenpornsexpussy.com

Wow that was unusual. I just wrote an incredibly long comment but
after I clicked submit my comment didn't show up. Grrrr... well I'm not writing
all that over again. Anyhow, just wanted to say wonderful
blog!
Here is my site ; Forex Trading Demo

My family members all the time say that I am wasting my time
here at web, but I know I am getting know-how everyday by reading such pleasant articles or reviews.
My site ; Interior Design Ideas

I'm curious to find out what blog system you have been working with? I'm experiencing some minor security
issues with my latest site and I would like to find something more safeguarded.

Do you have any recommendations?
Here is my blog - iraqi dinar revalue

After checking out a handful of the blog posts on your web page, I truly like your way of writing a blog.

I saved as a favorite it to my bookmark website list and will be checking back soon.

Take a look at my web site as well and tell me your opinion.
Also visit my web site ; click the following web page

Wow, incredible blog layout! How long have you been blogging for?
you make blogging look easy. The overall look of your site is great, let alone the
content!
Here is my blog ; New Bubble Shooter

When someone writes an article he/she keeps the thought of a user in his/her mind
that how a user can know it. Therefore that's why this paragraph is perfect. Thanks!
Also see my web page :: bethesda waters

Admiring the time and energy you put into your website and detailed information you present.

It's good to come across a blog every once in a while that isn't the same outdated rehashed material.
Fantastic read! I've bookmarked your site and I'm adding your RSS feeds to my
Google account.

hello!,I really like your writing so a lot! proportion we keep up a correspondence more
about your article on AOL? I require a specialist on this house to resolve my problem.
May be that's you! Looking forward to see you.

Thanks for the marvelous posting! I quite enjoyed reading it,
you may be a great author.I will remember to bookmark your blog and may come
back in the foreseeable future. I want to encourage continue your great work, have a nice weekend!

Yesterday, while I was at work, my cousin stole my iphone and tested to see if it can
survive a 40 foot drop, just so she can be a youtube sensation.

My iPad is now destroyed and she has 83 views. I know this
is completely off topic but I had to share it with someone!


Look into my web-site hotgirlsexcam.com

What's up, I check your new stuff on a regular basis. Your writing style is awesome, keep up the good work!

Feel free to surf to my page :: Sexvideovoyeur.com

Whats up very cool site!! Man .. Excellent .
. Wonderful .. I will bookmark your blog and
take the feeds also? I am satisfied to search out
numerous useful information right here within
the publish, we'd like work out extra techniques in this regard, thank you for sharing. . . . . .

Have you ever considered about adding a little bit more than
just your articles? I mean, what you say is fundamental
and all. However think of if you added some great pictures or video clips to give your posts more, "pop"!
Your content is excellent but with pics and video clips, this website could definitely be one of the very
best in its niche. Terrific blog!

Here is my web blog: www.babesflick.com

Excellent beat ! I would like to apprentice at the same time
as you amend your site, how can i subscribe for a blog website?
The account helped me a applicable deal. I have been tiny bit
acquainted of this your broadcast offered brilliant transparent concept

Here is my web-site :: http://www.tamporno.net/

Way cool! Some extremely valid points! I appreciate you
writing this write-up plus the rest of the site is also very good.

Great post. I'm experiencing a few of these issues as well..

I was suggested this web site by my cousin. I'm not sure whether this post is written by him as no one else know such detailed about my problem. You're amazing!

My spouse and I stumbled over here by a different web address and thought I should check things out. I like what I see so now i am following you. Look forward to checking out your web page again. If you want to enjoy entertainment don't forget to visit สล็อต