Solferino: Making their move for a better world 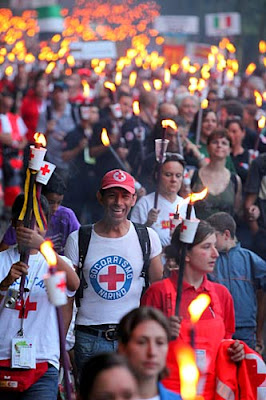 Last weekend of 26-28 June 2009, thousands of people gathered together in Solferino to mark the 150th anniversary of the Battle of Solferino and celebrate the birth of an idea that led to the founding of the Red Cross Red Crescent Movement. With commitments in Indonesia with the tsunami operation, I was so disappointed not to make it to Solferino, but I have followed it closely through friends and Red Cross websites.

1859-2009: 150 years since the birth of the idea of the Red Cross Red Crescent
One hundred and fifty years ago, a battle in northern Italy led to an idea, that has since gone on to change the world. In June 1859, Henry Dunant, a young Geneva businessman, witnessed horrifying suffering and agony at the battle of Solferino. In response, he mobilized the nearby village of Castiglione to care for the wounded, regardless of their nationality. Not satisfied to forget, Dunant returned home and proposed the idea of voluntary relief societies, which are now the National Red Cross and Red Crescent Societies, present in 186 countries throughout the world.

Isn't this an inspirational beginning which today is the largest humanitarian organisation in the world. 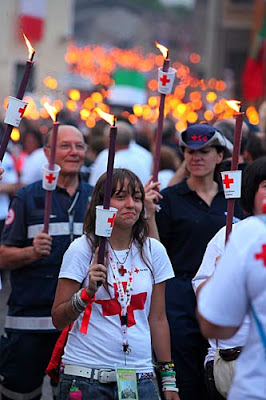 An estimated 13,000 Red Cross and Red Crescent volunteers coming from all over the world participate in a 9 kilometer torch-lit procession in Solferino, Italy to to mark the 150th anniversary of the Battle of Solferino and celebrate the birth of an idea that led to the founding of the Red Cross Red Crescent Movement. ©ICRC/M.Kokic/27 June 2009 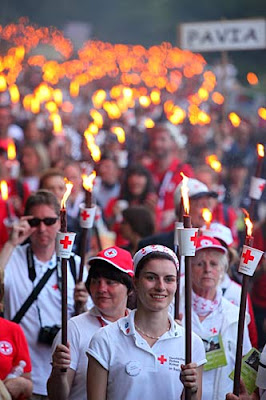 Red Cross and Red Crescent volunteers from all over the world join together at Plazza Castello in Solferino.
©ICRC/M.Kokic/27 June 2009

Five hundred youth from 149 countries at the third Red Cross Red Crescent world youth meeting Solferino in Italy this week are planning their next move for humanity. Under the theme “Youth on the Move”, workshops, cultural exchanges and meetings are taking place as part of the 150-year anniversary of the battle of Solferino. Stephen Ryan, communications officer for youth and volunteers at the International Federation of Red Cross and Red Crescent Societies (IFRC), said he hoped the youth meeting would inspire concrete actions in participants from every part of the world. “History won’t be made at this meeting. This is just the start of a long journey. History will be made when people return to their home countries.” Samantha Duncan from the Grenada Red Cross Society said the best part of the meeting was learning what works in other countries. “I’m here to learn more about the best practices of other National Societies so that I can take it back to my country to improve our society and make an improvement on our programmes. “I’m here to build capacity for my National Society, take new ideas and also take old, existing ones that work for other countries and see what we can do with them and adopt them in our country.” Aaron Turner, a youth search and rescue leader and emergency response team in the New Zealand Red Cross, said he was impressed with the role of youth in other countries. “New Zealand Red Cross youth is not quite matured yet. It’s still in its really early stages and a lot of National Societies, particularly African societies, have 80 per cent of their members youth classed as youth whereas in New Zealand it’s less than 5. “It’s just fantastic to see the energy and vitality these countries bring. And it’s a lot to learn from.” He said he would try to take home the spirit of enthusiasm and communication. “My next move is to take back the motivation and the vitality that’s here. It’s just insane. The opening ceremony was something I’d never experienced before and I completely underestimated it. It’s something we want to take back to New Zealand. “To start a Pacific forum or to increase communication would just be fantastic.” Hadhya Al Zawm, a volunteer co-ordinator in the Yemen Red Crescent Society, said she was inspired by the Red Cross Red Crescent’s global values of humanity, independence, neutrality, impartiality, voluntary action, universality and unity. “I am here to meet our other brothers and sisters in the Movement. It was my dream to be here and to participate with other youth. And not to see not only in Yemen but all over the world that we all believe in the same fundamental principles and we do the same volunteering work and the same activities.”

Thanks to Rosemary North, IFRC or her article and the ICRC for photographs. 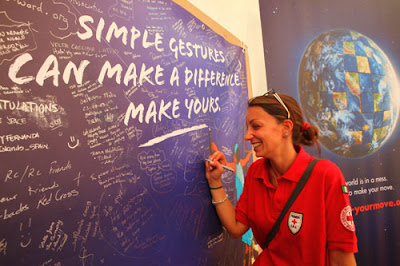 The need for humanitarian action is no less today than it was in Dunant’s time. So from 28 June 2009, Red Cross and Red Crescent volunteers and staff got her in Italy to remember the past, but also to look to the future. The world is changing, and so too are the challenges.

Simple gestures can make a difference - Make yours. 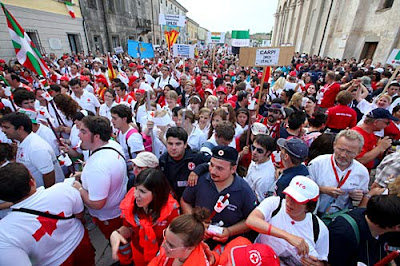 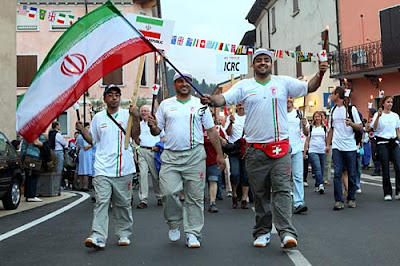 Kia ora Bob,
You are an inspiration mate! I am up in the Naki and the mountain shines against the blue sky. It is also a very inspiring sight even if I can only gaze upon her lovely flanks in my shirt and tie. Kia kaha.
Cheers,
Robb

I am a little envious of you gazing on the heights of Maunga Taranaki. I will be back in NZ on 20 July for 3 weeks so I will have the chance to see the hills again.
Arohanui.

Congrats with your Red Cross 150th
birthday. I was once a red cross volunteer too But i probably already told you that. They do good work here too. I like the program where they provide breakfast to schoolkids who come at school without. It is shocking how many kids come to school here without food

I am pleased to know you were once a Red Cross volunteers. Yes the programme providing breakfasts in school is a good one.

Good to hear from you. Tks.
Bob

Τhis dеѕіgn iѕ spectacular!
You certainly know how to kеep a readеr entertаined.

Hеre is my weblog tw.cankol.com

You've performed an impressive job and our whole neighborhood shall be grateful to you.

Howdy! This poѕt cοuldn't be written any better! Reading through this post reminds me of my old room mate! He always kept chatting about this. I will forward this article to him. Fairly certain he will have a good read. Thank you for sharing!

I'm truly enjoying the design and layout of your website. It's a very eаѕy on the еуes which makes
it much more enjoyable for me to come here and visit morе often.
Did yοu hire out а designer tо create youг theme?

Pilots complete flights for their airline, using their simulator,
either online (using a network such as Sim - Miles) or offline, and then file a pilot report.
Nowadays with flight simulators you can have lots of fun out of these games and besides all this you do not have to spend
thousands. The students are imparted cost-effective training into
experiencing and learning how situations of emergency can be handled.
The main purpose of a Simulator is to understand the behavior of the system.
If youre a flight sim enthusiast, the you must try the king of
flight simulator games.

In the event you could e-mail me with a few suggestions on just how you made your weblog
look this glorious, I'd be grateful.

Simply wish to say your article is as surprising.
The clearness in your submit is simply nice and that i can think you're a professional in this subject. Well with your permission allow me to snatch your RSS feed to keep up to date with impending post. Thank you 1,000,000 and please carry on the rewarding work.

Such good information is given about travel in this blog..Everyone do likes to travel....Our company Aananda Holidays also provides the best service for travel travelers.

TriStar provide best services to the client. Be it logo for your t-shirts, caps or jackets TriStar does all for small as well as bulk orders.