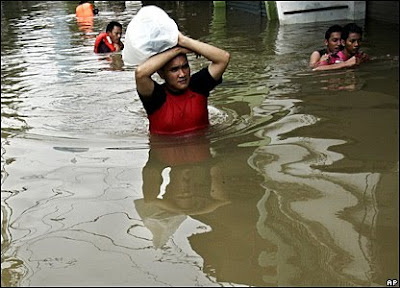 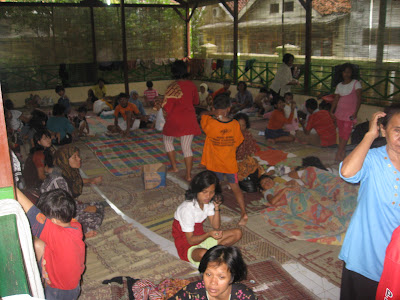 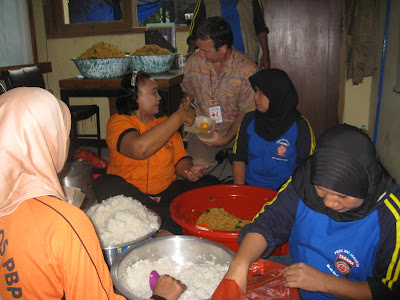 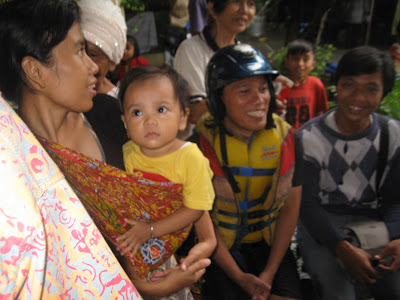 A mother and child who were rescued from the roof of a flooded house by young PMI volunteers (right) in an inflatable boat. Photo: Bob McKerrow

During the last 8 days I have travelled with Jusuf Kalla, new Chairman PMI, Pak Budi secretary general, and a number of board members and staff, to 8 provinces of Indonesia's 33 provinces, on four different islands. We visited Surabaya and Jakarta provinces on Java, Makassar, Mamuju and Kendari on Sulawesi, and Jambi and Riau on Sumatra and the Bangka and Belitung islands, off Sumatra.
Jusuf Kalla has a clear vision as Chairman PMI and that is one of expanding the quantity and quality of the PMI national blood programme and strengthening readiness for disaster response. Jusuf Kalla sees blood as a vital component of risk reduction. 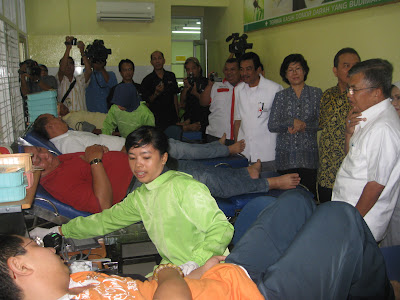 He has set a target of 4 x 4 ? No it's not a Land cruiser, but it stands for reaching a target of having 4 million units of blood for four days at any one time, all the time, in Indonesia. Apart from servicing the growing day to day demand for blood, it will provide a huge buffer stock in times of emergencies, which asre frequent in this country which is a Supermarket of disasters. 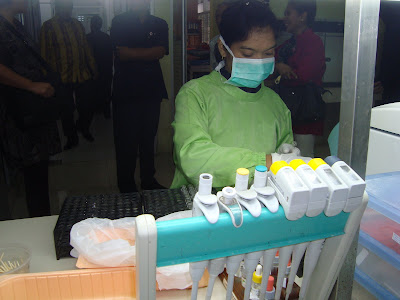 Blood must be screened and tested with utmost accurancy. The Blood bank in Pangkal Pinang.

In this enormous island nation comprising 17,500 islands , and where it takes seven hours to fly from the eastern extremity to the remotest north western corner, the task ahead of the Chairman is daunting. During the past eight days in travelling with him, I have witnessed a strong compassionate man with a vision, a mission and an iron will to complete things quickly. Like Nelson Mandela, Bill Clinton, Barack Obama and Sonia Gandhi, Jusuf Kalla has the walk about charisma. He loves people, he loves his country while keeping a global overview, and with his passion, contacts, networks and business acumen, he has the team to assist him to reshape the humanitarian landscape of Indonesia. Below I have posted a few photographs to illustrate some of the lighter moments of our trip in the past eight days.
. 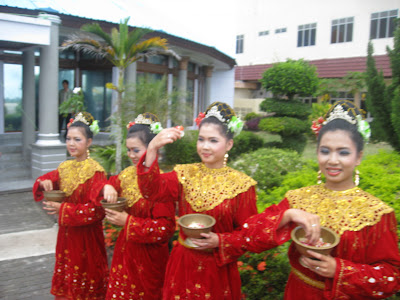 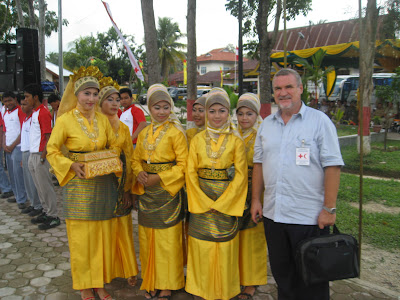 In Jambi we were welcomed by young dancers in traditional dress. Photo: Wayne Ulrich 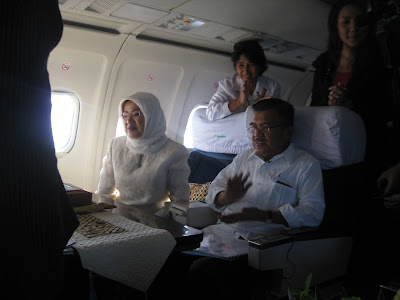 On the trip to Sumatra, Jusuf Kalla travelled with his wife. To her surprise, someone produced a birthday cake and we celebrated her birthday. Photo: Bob McKerrow 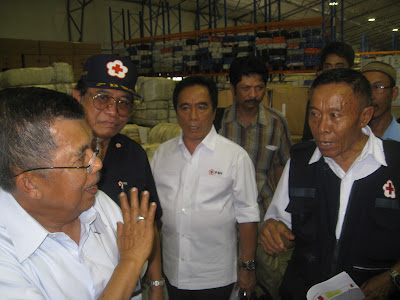 One of Jusuf Kalla's great strengths is his ability to undertake arduous field trips to motivate Indonesian Red Cross volunteers and to share his vision. Photo: Bob McKerrow 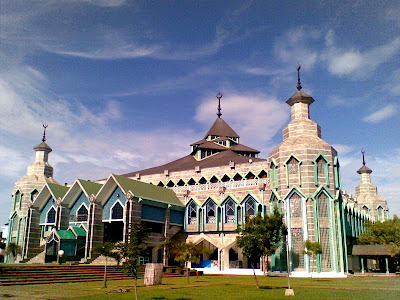 The Mosque in Makassar. 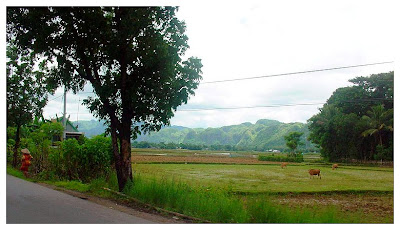 The countryside in Sulawesi is green and fertile. 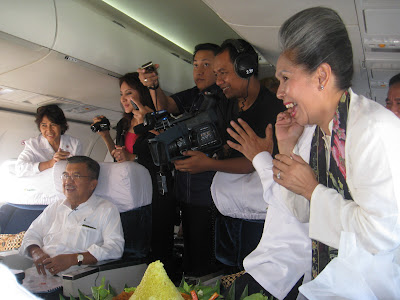 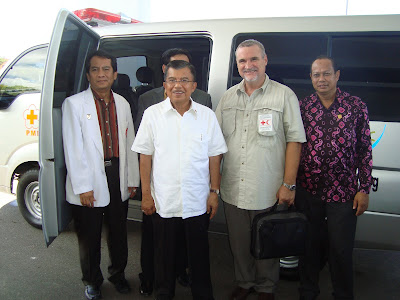 With Jusuf Kalla, in the centre wearing a white shirt. The Ambulance behind, was donated by a local businessman in Pangkal Pinang. 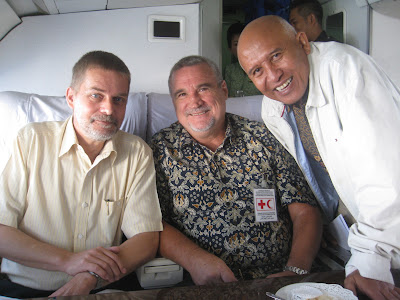 I travelled with Pak Budi SG of the PMI (right) and Peder Damm from the Danish Red Cross (left) and on other trips, colleagues from the French and Canadian Red Cross joined us too.

This report on the annual floods in Indonesia shows the beneficials aspects when governments take natural disasters seriously and do everything in getting folks to take disaster preparedness seriously so as to reduce loss of life. Governments who fail their people in disaster preparedness and have for decades upon decades failed to build sustainable infra structure for the people should be held accountable. Such leaders should not be allowed to flee the country with their ill-gotten treasures to live happily ever after in penthouses or whatever. I'd say send them all back to the country they have destroyed and let them work by the sweat of their brows to repair the damage they have done.

As usual, your honesty is admirable and I do agree with you about the benefits of Governments taking the threat of natural disasters seriously. And I concur with your statement about governments who fail their people. Sadly this has happened so much over the years.

Kia ora Bob,
I have to heartiliy agree with Paterika's words and observations. And it is not just within "other" countries either. Ol' George and the state government of Louisiana still have a lot to answer for in New Orleans. But because the white sections and tourist areas have been restored we think everything is fine, yet huge portions where the black people lived still lie in ruins and those people permanently displaced. No doubt to the glee of some. Crimes against humanity. Or here in New Zealand where Key wants to Commit Crimes against Nature.
Cheers,
Robb

You observations on Katrina ring so true for many countries, and that's why I think Indonesia set a model of building back better when the Tsunami occured and that professional caring approach, is being used in disaster preparedness and risk reduction at national levels, right down to community level.

Sad to read of our politics in NZ but I hope Keys will soon realise that the majority of NZ want to keep our nature in tact, as opposed to more environmental degradation that will eventually ruin tourism.

I always emailed this blog post page to all my contacts, for the reason that if like to read it after
that my friends will too.

hi!,I like your writing very a lot! share we be in contact
more about your article on AOL? I need an expert in this space to solve my problem.
May be that is you! Having a look ahead to look you.

I don't even know how I ended up here, but I thought this post was good. I do not know who you are but definitely you're going to
a famous blogger if you aren't already ;) Cheers!

Great info. Lucky me I ran across your website by chance (stumbleupon).

I have book-marked it for later!