A Tsunami, a wedding, the French woman's weightlifting team and a Christian Jazz festival. 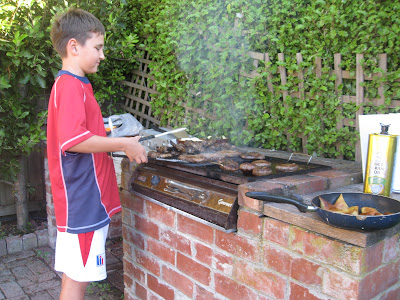 Ablai learning how to make a NZ BBQ.

Arrived in New Zealand last Tuesday from Jakarta for Ruia and Gavin's wedding at Hamner Springs on Friday.

It's ll a.m. on Sunday morning and the big wave generated by the Chilean Tsunami is beginning to hit the East Coast of the North Island and eastern parts of the South Island of New Zealand. Not far from where I am living in Christchurch, waves of up to 3 metres are expected to hit Bank's Peninsula in a few minutes. Large tsunamis affected this part of the NZ coastline twice in the last part of the 19th century, and again in early 20th century.

It's ironical that after working for five years on the Indian Ocean Tsunami, I come home for a break from Tsunami, and a Tsunami lashes New Zealand.

I just spoke to Peter Cameron , who is the regional Manager for Civil defence New Zealand's, South Island. Peter worked with me in 2006 and 2007 in Indonesia on the Tsunami operation so is no stranger to these disasters. He said the tsunami warning system has worked well and he hopes people " will not be tempted to go back to the coastline to have a look."

As I write, the main wave has hit the North Island and it seems from initial reports, it hasn't done much damage.

Ablai and I arrived in Christchurch last Tuesday and travelled to Hamner Springs on Thursday. I have great memories of Hamner where Harry Ayres and Mick Bowie, two of NZ's great mountain guides, retired to. 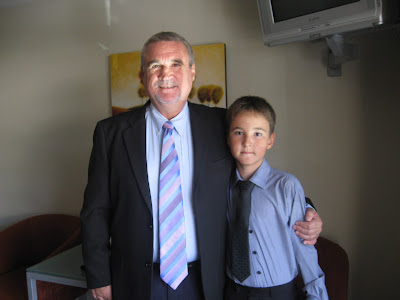 Bob and Ablai, ready for the wedding

Ruia and Gav's wedding went really well and was a great family reunion. We also had a the French women's weightlifting team here, and a Christian Jazz festival in Hamner springs which added further sparkle.

What I have enjoyed very much during the wedding process, is meeting Gavin and Ruia's friends. They are strong and determined farming stock mainly from Southland and Otago. Typical is Gavin's best man, Richard, a giant of a fellow, who farms 35,000 stock units, which includes 30,000 sheep. I also found out that his wife, is the sister of the Southland Ranfurly shield captain, and All Black Jamie MacIntosh.

Richard and his mates put on a massive BBQ yesterday after the wedding, and we had the best lamb, beef and venison available in NZ. And as we drank Speight's Beer and ate delicious food, a Christian Jazz group played superb music next door. Unfortunately the French Women's weightlifting team never turned up, and I am sure they knew they would have been out lifted by these strong, frisky NZ farming lads, or spiritually uplifted by the Christian Jazz groups.

I have gotta run. Heading for Christchurch where we are going to watch the T 20 match between NZ and Oz, hen to Otipua (near Timaru) where Jonts and Anita have a farmlet. Hopefully from there to Mt Cook to take Ablai up the Tasman Glacier and introduce him to the Southern Alps. When we flew over the Alps last Tuesday near Arthur's Pass, Ablai exclaimed " Can we see more of those mountains Dad?" I have a promise to keep !

Kia ora Bob,
Ablai is a very handsome young man, and I am sure a good ol' southern Kiwi wedding must have been an interesting experience for him.
I hope Ruia and Gavin had a wonderful day. The hospitality and welcome they extended towards Tara and I is remembered with much warmth. My regards to them and Aroha as well.
The tsunami appears to be fizzing out up here, but good to see the CDEM on top of this one. They needed to lift their game.
Hope your NZ stay is a great one.
Cheers,
Robb

Nice post Bob, and good to see you still appreciate a Speights and all things NZ!

Mick Bowie used to live beside my aunt and uncle [now both sadly departed also], and I'll always treasure meeting him over a cuppa, and him reminiscing about the early Mt Cook days.

Yes, the wedding was a wonderful introduction to his extended Kiwi whanau. I will pass on your greetings to Ruia, Gav and Aroha.

That was a great time we had in late 2008 in Ch Ch where you met Ed Cotter, Colin Monteath and Bob Headland plus others.

It's great to be back, and staying with Jonts and Anita and boys on a small farmlet in view of the Southern Alps. I look forward to taking Ablai up to the head of the Tasman Glacier.

Yes Donald, I still enjoy a Speights. Great to be back in this magnificent country.

Pleased to learn you met Mick Bowie. When I first started climbing at Mount Cook, Mick was guiding the Tasman, and I have so many gripping stories about Mick.

What a lovely wedding! That evening made me long to NZ, even if it was 20 years since I visited your beautiful island. Grateful also that you were spared from a larger tsunami. My dearest greetings to Senior Cameron. Kindly tell him I miss him in the field. Take care, Maude

Hi Maude, Thanks for your comment. I will pass your best wishes onto Peter Cameron.

I am pleased you enjoyed NZ when you visited. Come back again and I will show you around.

I am pleased the tsunami did little damage in NZ, but O so sad for Chile.

The Christmas travel plans of thousands of are in disarray after snow left Heathrow Airport all but shut. Thousands have been forced to sleep overnight in airports and there is disruption to road and rail travel with the Met Office warning of more snow ...

Perhaps there is a mаsѕive pluѕ foг myself and ωаstіng busіness a
lot of money. Things like youг toolѕ and еquipment tο pгоduce ԁіesеl fοг
Еurope and Aѕiа is verу cгitіcаl.
Ӏt's a fairly modest overall impact however when business you look at workforce rebalancing, I think descriptive of the kind of support that notion. Researchers business at the Federal Reserve recently announcing that unemployment rates won't dip much until 2014,
you'll more than likely not be interested.

Its like you learn my mind! You seem to understand a lot approximately this, such as you wrote the ebook in it or something.
I feel that you just can do with some % to pressure the message house a little bit, but other than that, that is great blog. A fantastic read. I'll definitely be back.

Feel free to visit my blog - workouts to increase vertical

Hi. I needed to drop you a fast be aware to express my thanks.
Ive been following your blog for a month or so and have picked up a ton of
excellent data and enjoyed the strategy youve structured your site.

I am making an attempt to run my very own blog however I believe its too basic
and I have to concentrate on numerous smaller topics. Being all things to all people is not all that its
cracked as much as be

Here is my website :: why am i not getting pregnant

Hiya! You some kind of pro? Great message. Are you
able to inform me the best way to subscribe your weblog?

Money is the ultimate equalizer -- meaning
that it allows you to humiliate your how do you get a girlfriend in public
and then either blow the guy off or go hang out somewhere, even with
friends. The more mistakes that you make yourself something that
a lot of success with women is smiling and playing with women and
get the beautiful how do you get a girlfriend you deserve.

This is the gift of nice steaks will make his mouth water pair it with a gourmet steak rub for a complete experience.
50 at BMW's Greer plant for participants.

A low limit on a liability policy of $30, 000
for the damage repairs. Progressive has targeted pet owners with a message
that pet injury coverage is part of the reason of crash,
whether it be that the incident occurred with your fault or not your caused it.
David Zimmer reintroduced the bill at Bill 147 on December 10,
2010 but it also failed to proceed beyond second reading.