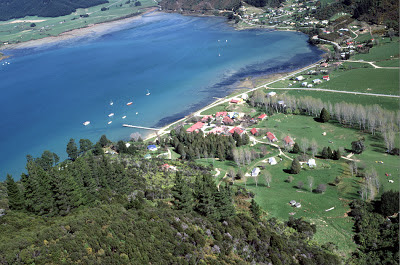 Anakiwa looking down on the red roofed school in 1986. Photo: Bob McKerrow

Students change immeasurably on Outward Bound courses, and so do staff and families living and working there. We must strive to tred more lightly on the lands surrounding Anakiwa, as it provides a sense of place or Turangawaewae to many New Zealanders and overseas students who did an Outward Bound course there, or were employed as staff. John Lawrence one of the first instructors at Outward Bound, and a climbing partner with me in the Peruvian Andes in 1968, still refers to Anakiwa with reverence and a sense of belonging that was engendered in him. As a mountaineer attached to a NZ Antarctic survey, he named a remote peak Mt. Anakiwa, and has sent photos and written articles for the 50th celebrations.

My daughter Aroha was born there and we buried her afterbirth there and planted three trees, Rimu and Totara I recall. It is her Turangawaewae and for many others because of their attachment to the place. A place to stand tall. 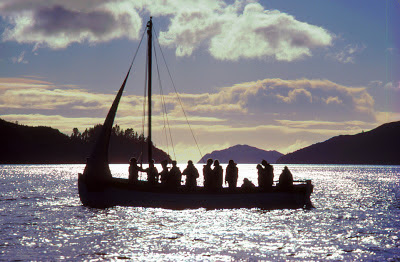 Students about to put up sail on one of the 32 foot naval cutters. Photo: Bob McKerrow

Anakiwa is all about nudging, changing, growing inspiring, empowering, risk management and discovering.

As Ann Esler wrote (nurse 1982-84):
“The place shapes the people and the people shape the place.”

Many others will be writing about their courses, their time there as instructors, so I decided to write about the early anniversaries and about the people who shaped the Outward Bound philosophy and schools world-wide.

Outward Bound is 50 years young. I vividly remember the 21st anniversary in 1983 and the 25th anniversary in 1987 and I went to the second International OB conference in Malaysia in 1986.In Malaysia I met one of the then four living disciples of Kurt Hahn, the founder of Outward Bound, Josh Miner. The others then were the Duke of Edinburgh, Tom Price and Lester Davies whom I all met. 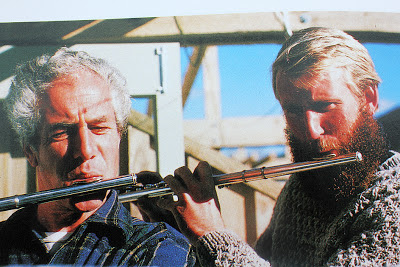 I was very fortunate to have Gaike Knottenbelt (right) as my deputy when I started as Director at Anakiwa as he had many years as an instructor and knew outdoor education inside out. Here he is playing a flute with Ray Waters, a former deputy at Outward Bound Anakiwa.  Gaike came back with his wife Ruth, as Director from 1996-2000 and they strongly  re-positioned the NZ Outward Bound School catering for a wider range of courses.

The 21st anniversary which doubled up as the first ever International Outward Bound conference and brought together world leaders in outdoor education with luminaries such as the legendary Tom Price, C.K. Cheng from Malaysia, Ian Fothergill, Roger Putnam, Roger Binns, Lester Davie, Bill Phillips, David Miller, the famous mountaineer Vic Walsh and John Huie. Our Trans-Tasman outward bounders were there; Gary Richards and Alan Riches. Paul and Sue Schurke was also there, Paul having set up a remarkable outdoor centre in the USA called ‘Wilderness Inquiry.’ ( I later went on two Arctic dog sled trips with Paul including one to the North Pole) So leading OB mentors came from Asia, Africa, Europe, North America and Australasia to celebrate our 21st anniversary. This was a turning point in the history of the global Outward Bound movement as it brought a sense of unity through sharing each country's approach, and out of this gathering, I believe a more standardized approached began to emerge. I say this because the following year I visited Outward Bound Schools in Singapore, Malaysia, Wales, England, Scotland and the USA and had long philosophical and problematical discussions with school directors and staff and this was followed up in the years to follow. 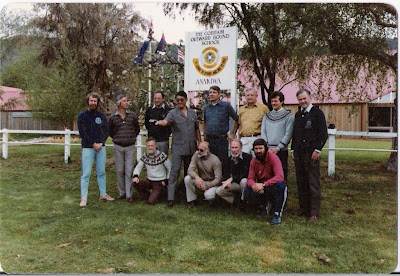 What stood out for me as an incoming Director of the NZ Outward Bound School, were the discussions we all had at the 21st anniversary on risk management and student safety. Directors and wardens from all over the world had backgrounds as mountaineers, sailors, kayakers and adventurers, with some form of  training in education or social services. Only one had a military background. But the overall commonality I remember was humour and passion for the development of young people, and not to rob them of self discovery by cosseting. But underlying this approach, was a strong sense of devotion to risk management. 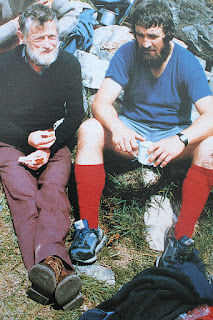 Tom Price left, with Bob McKerrow on one of the high ridges behind Anakiwa, having a tea break and discussing Outward Bound in 1983.

Tom Price, who took over from the great mountaineer Eric Shipton as Warden of the Eskdale Mountain Outward Bound School, the guru of outdoor education then,  told me this:

"Anyone can make adventure training safe by taking all the adventure out of it. The best safety lies not so much in the avoidance of danger but in learning how to deal with it."

In the 50's and 60's Tom Price wrote many articles on outdoor education, character building and referred frequently to managing risks.

When I look back at my time as school director, I believe students learnt how to deal with danger, but also how to overcome their own self-imposed limitations. I remember Don Grady quoting me in his book Outward Bound at Anakiwa. “The physical journeys are the outward journeys, which lead to the most important journey – the journey inwards, the journey of self discovery.”

In discussions we had at Anakiwa in 1983, Don McKay, warden from 67-74, was a keen supporter of Tom Price, Vic Walsh, Roger Putnam and myself in not wrapping students in cotton-wool, but giving them adequate training to make their own decisions in potentially dangerous situations, under the watchful eye of sound instructors. 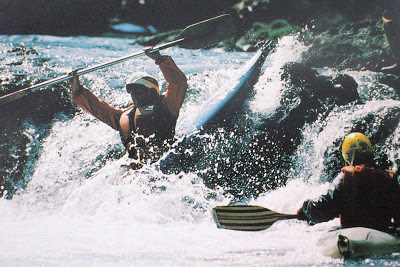 In the 80's, we gave students opportunities to push themselves beyond their own self imposed limitations. Going over the Rai falls.

But our over cautious, over regulated society today is bubble wrapping our youth and limiting the physical journeys by the ‘belt and braces’ approach to safety and insurance threats.


“To taste success, you must also taste dirt,” multisport adventurer Steve Gurney says.
It is the nine-times Speight's Coast to Coast winner's gritty philosophy on life was what he talked about when he was in Central Otago last month to promote his new book, Eating Dirt.
"Eating dirt is a metaphor and the over-arching message of the book is that you learn from your mistakes.
"To do this, you have to eat dirt a few times, take a few risks and crash off your bike."
In Gurney's view, life has become too antiseptic, especially for children.
"At schools and in sport, we're bubble-wrapping kids and they're missing out on getting the experience of how to judge risk, so that they'll know how to find their limits later in life."
Not that kids should be reckless, he stresses. 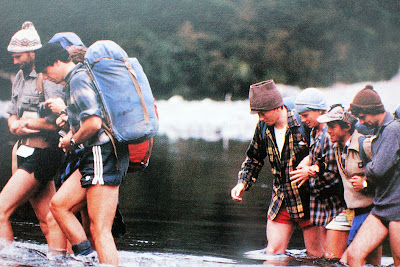 Rivers are dangerous and instructors would make sure students were thoroughly trained in river crossing.

At the 21st Anniversary of Outward Bound at Anakiwa, a lot of discussions centred round risk management and guiding students how to deal with the dangers of life, accidents and deaths to students were thoroughly discussed. 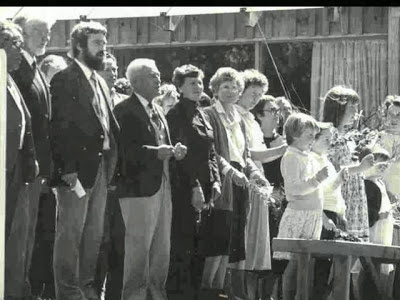 Turi Elkington 2nd from left and his wife next to him, leads us in a Powhiri in the 1987 25th anniversary. I am to the left of Turi and my daughters on the far right.

A lot of healing took place in 1983 with Turoa Royal leading the visitors the 21st celebrations at the Anakiwa marae and the Elkington family from Ngati Kuia iwi, welcoming all visitors. A memorial service and cleansing ceremony was conducted by Turi Elkington, for Richard Anthony Ropiha, 18 years,  who fell on the rock face at Anakiwa a few months earlier, a week before I arrived at Anakiwa. A small memorial stone suitable inscribed with a Maori proverb was blessed. Its translation reads,  “The cliff-climber dies on the cliff.” The paths in this little sanctuary are flanked with stones carefully placed by students and a seat made by students for those who wish to meditate or seek quiet. In various karakia, (prayers), speeches and discussion the healing took place over Richard’s death at the 21st anniversary at Anakiwa. Danger, death, risk, place, maturing, accidents and extreme joy and satisfaction are all facts of life when you journey in the outdoors. 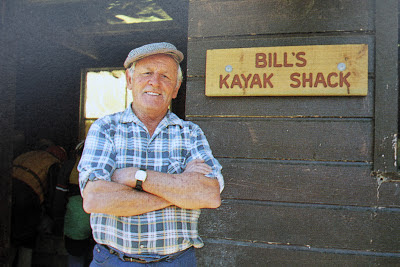 The indefatigable Bill Hathorne at 'Bill Kayak Shack' on the banks of the Rai River.

When I took over as Director at Anakiwa I greeted and fare-welled students in Maori and felt Anakiwa was a Taonga (a national treasure) and we needed to introduce more Maoritanga. Having Turi and Jim Elkington from the Ngati Kuia Iwi in Picton enabled staff to visit maraes, learn waiata and karakia, and marae protocol. Eru Emery coming aboard as an instructor of Maori origin helped me considerably in bringing about a bi-cultural approach. I have always noticed in my travels that you have to be bi-cultural before you can talk about multiculturalism. 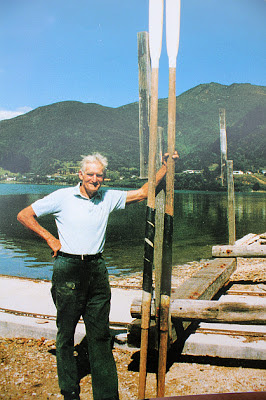 Left, the legendary 'Soundsman' Len Baxter as strong as an Ox and a skillful  master boatman and carpenter. Ah, many a drink I had with Len and Bill in the workshop or boatshed discussing the school and the sea.

At the 21st celebrations, our two veterans Bill Hathorne and Len Baxter, handyman and boatman,  both rugged independent individuals, joined in and were living examples of continuity and commitment for their uninterrupted employment throughout first 21 years of the school at Anakiwa. In fact, they were my Kaumatua, advisers, and had so much wisdom to offer, and even more laughs.

In reaching its 50 year anniversary, I greet old friends, staff, students and those volunteers who gave 50 years of dedicated service to the youth of New Zealand. I am sorry I cannot be with you from 26-28 October  for the celebrations in Anakiwa and Blenheim as I am working with people displaced by 30 years of war in Sri Lanka where we are providing houses water, sanitation and livelihoods to 20,000 families. I am currently short of staff and I have to have my hand on the tiller.

As we raise a glass let's remember the founder Kurt Hahn and all those who made Outward Bound possible. 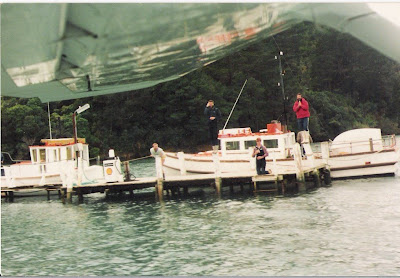 The Matakana a former Wahine lifeboat and the Dauntless, two our our main work boat taken from a low-flying plane. I am in the red jacket. 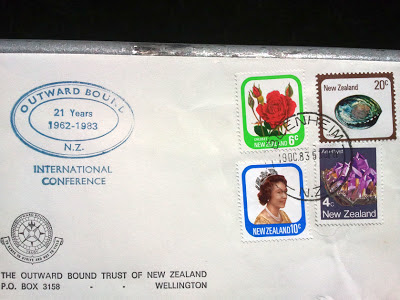 A first-day cover was put together by Ron from the OB committee in Dunedin for the 21st anniversary above, and 25th below. 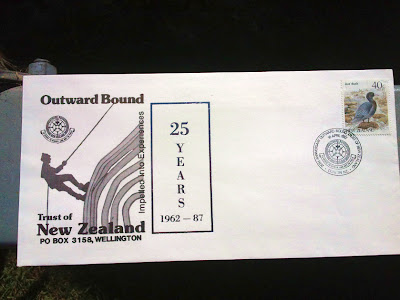 Various invitations for the 25th anniversary below. 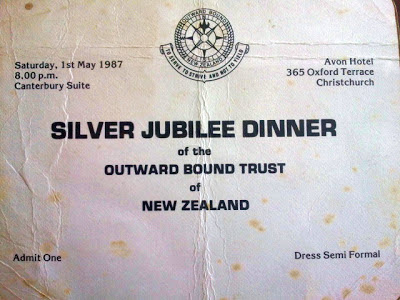 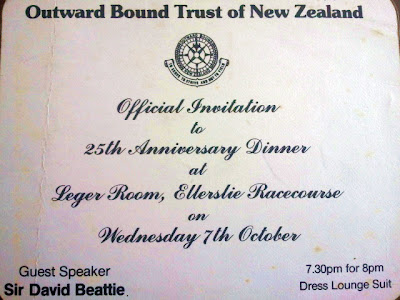 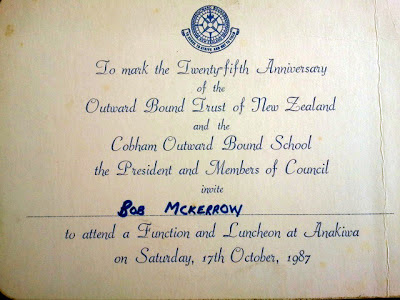 Thanks for an concept, you sparked at thought from a angle I hadn’t given
thoguht to yet. Now lets see if I can do one thing with it.

My weblog; i'm having trouble Getting pregnant