After kayaking across Cook Strait, that notorious stretch of water separating the North and South Islands, three times in two months in 1988, a double crossing and a solo crossing. Some months later I teamed up with the el supremo of world kayaking, Paul Caffyn, and went to Australia to attempt to be the first people to kayak from Australia to New Zealand. Sadly we were arrested by Australian Maritime Police for not having a radar reflector. So it was with some deep interest I read this story earlier today about a group of sea kayakers having to be rescued. 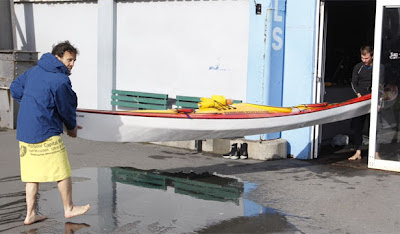 Two of a group of kayakers Tpreparing for a Cook Strait crossing who had to be rescued by police after they fell out of their craft in Wellington Harbour today.
A group of kayakers sent out a mayday call after a member of their group capsized setting off a chain of events that saw three more fall out and all swept to the middle of Lambton Harbour.
The group of eight had been practicing for a November 10 Cook Strait crossing, but some may be left on dry land following this morning’s incident.
Former National MP Aaron Gilmore, a kayaker of 20 years, was among the group that got into trouble as their party hit strong winds and big waves in Wellington Harbour about 8.30am today.
Gilmore said, following today’s incident, questions would be asked as to whether some of the group were in good enough condition to cross the Strait.
One kayaker hit a wave and gusts of wind up to 45 knots and tipped out.
He was helped back in his boat by others but tipped out soon after. His un-manned boat got tangled with another kayaker, who also tipped out.
The third and fourth kayakers tipped out in the waves and strong winds and a mayday call was sent out from an on-board marine radio.
Two other less-experienced kayakers, who had held back, returned to Fergs Kayaks, where the group had set out from. Gilmore and another kayaker, still upright, paddled to Freyberg Beach.
He applauded the response of police, who rapidly plucked the four kayakers out of the water.
The group was well prepared and had intentionally been training in rough conditions, he said.
‘‘We had a marine radio, we had all the gear. It shows you the importance of having the right gear.’’
Fergs Kayaks general manager Dave Annear, one of the four to tip out, said the group had been training in a sheltered area near the overseas container terminal.
After the first kayaker tipped out the group was swept about 400m deeper into the harbour.
Those who remained upright waited by capsized kayakers to help police locate them, he said.
Of the 30 people in training for the Cook Strait crossing – arranged by Adventure Wellington but trained by Fergs – only between four and eight would be able to make the November 10 crossing, he said.
He was not concerned about a similar situation happening during the crossing.
‘‘If the conditions look like this they will not be going ahead.’’
It was not yet decided if a support boat would be used but full safety gear, including flares and emergency locator beacons, would be carried. 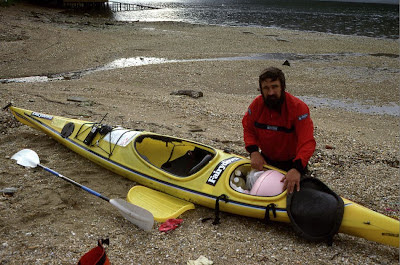 Bob McKerrow preparing for a solo crossing of Cook Strait. Note radio, compass and maps on fore deck. Bob did three crossings of Cook Strait in two months in 1988, a double crossing with Adrian Kingi and a solo crossing from Raumati Beach to Cape Jackson, a 10 hour trip. I did a huge amount of training for these trips.

Senior Sergeant Dave Houston, from the Police Maritime Unit, said conditions were gusty this morning and, while gale warnings were out, the kayakers had been in the confines of Wellington Harbour.
They were well-prepared with a radio, and wearing gear to ensure they were not too cold when they were picked up.
They were also wearing life jackets.
Fergs Kayaks co-owner, Olympic athlete Ian Ferguson, said the the group had been ‘‘pushing themselves to the limit’’ in the harbour confines to get used to rough conditions ahead of their Cook Strait attempt.
‘‘So it was probably quite good they had an issue with safety.’ Kayaks often tipped, he said.
‘‘Part of what we are doing is trying to prepare them for it.’
Posted by Bob McKerrow - Wayfarer at 22:10