To taste success, you must also taste dirt, 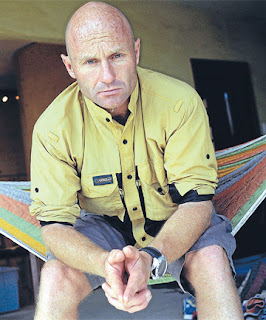 DIRT AND DANGER: Athlete-turned-author Steve Gurney reflects on what he has lost and gained through the Christchurch earthquakes and by penning a new book

To taste success, you must also taste dirt, multisport adventurer Steve Gurney says.
It is the nine-times Speight's Coast to Coast winner's gritty philosophy on life was what he talked about when he was in Central Otago last month to promote his new book, Eating Dirt.
"Eating dirt is a metaphor and the over-arching message of the book is that you learn from your mistakes.
"To do this, you have to eat dirt a few times, take a few risks and crash off your bike."
In Gurney's view, life has become too antiseptic, especially for children.
"At schools and in sport, we're bubble-wrapping kids and they're missing out on getting the experience of how to judge risk, so that they'll know how to find their limits later in life."
Not that kids should be reckless, he stresses.
"I've done some stupid stuff that deserves death but I'm still here to contribute to the gene pool."
The 49-year-old Cantabrian nearly wasn't, after a brush with death in 1994, when he contracted leptospirosis from bat dung while racing in the Sarawak jungles in Malaysia.
"While I was lying in hospital, and my organs weren't functioning properly, and I thought: this is not too good, maybe I am going to die, I realised you have to do things that really matter to you."
In February, Gurney accepted diversion following a guilty plea to careless driving after his car collided with a passenger train in Rangiora in September last year.

He said at the time: "You don't take that sort of thing lightly. It's been my job for 20 years as an adventure athlete to be aware of danger and recognise danger."
Losing his Redcliffs home in the Christchurch earthquakes has been a lesson in resilience.
"It's been challenging, upsetting to say the least. I even get a bit teary talking about it.
"It's all about resilience. The loss of your house is a good lesson because, as someone famous once said: the only thing that doesn't change, is change itself, and the earthquake is a poignant reminder of that."
In the past 18 months, he has been dividing his time between living in a caravan at his sister's Rangiora property, and his girlfriend's place in St Albans, Christchurch.
Having his world rocked has been a catalyst for change. 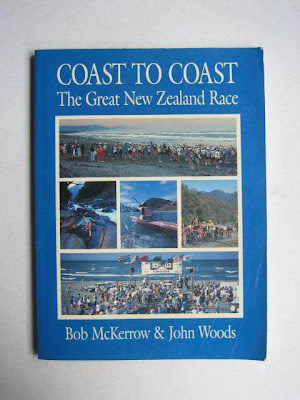 "I first got to know Steve in 1987 when we both competed in the Coast to Coast and when I wrote the history of the first 12 years of the race (photo above), I spent a lot of time interviewing him. Steve made the race fun and was always trying to bend the rules with nwe technology." Bob McKerrow

His next adventure, after attempting to cross Cook Strait by kayak in December, will be another kite-buggy trek, of Namibia's Skeleton Coast in Africa. "My goal is to not let it be my skeleton
"But actually part of my philosophy is to never think like that. Always focus on the solution rather than the problem."
A member of the New Zealand Order of Merit for services to endurance sport, he gave up professional multisport about four years ago to focus on adventuring, along with his work as a motivational speaker and workplace trainer. 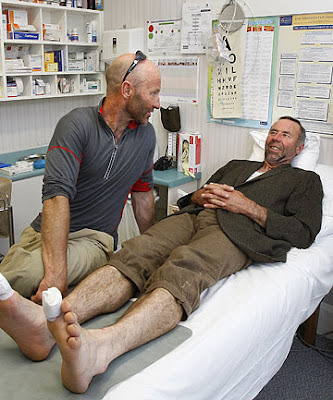 The adventure of the two Steves was temporarily on ice after Steve Moffatt's toes got a touch of frostbite during an ascent of Aoraki/Mt Cook. Steve Gurney, sitting, said it wouldn't be the end of their adventure.

A SERIES OF JOURNEYS

On foot: He has run thousands of kilometres to win multisport events, scaled mountains, even circumnavigating the ballroom in television series Dancing with the Stars. He also appeared nude live on a Breakfast TV interview.

By water: He paddled to victory many times, invented a kayak with wings and an anti-gravity paddle levitation device. He plans to kayak across Cook Strait in December to re-enact famous journeys for a TV show, with adventure buddy Steve Moffatt.

On wheels: He invented a controversial rule-bending pod bike, sailed the Sahara on a kite-buggy, crashing into rocks and ending up in hospital. A near-fatal brush with Borneo bat dung put him in another hospital on a gurney (no relation, the medical type).

By pen: He wrote a bestselling autobiography, Lucky Legs. Eating Dirt is his second book, encapsulating his abiding life philosophy about dreaming big and living at the edge of his comfort zone.

STEVE GURNEY'S TAKE ON ...
Nudity
"We come into the world without clothes and we spend the rest of our lives covering up – what's with that?!"
"I'm all for exploring life's possibilities, while having a bit of fun without offending anyone."
Waxing
"While working on Dancing with the Stars, my partner told me that the female voting public don't like hairy gorillas. I said to her, ‘but I am a big hairy bloke'. I'd also been told waxing hurt. Eventually they wore me down, so I went and had the whole lot done, and actually it wasn't too bad."
Lycra"Having to wear a skin-tight lycra ballroom dancing suit didn't faze me a bit."
"A lifetime lived in lycra is a big motivator not to put on weight because when I do, it doesn't look too flash.

Thanks to the stuff.co.nz for permission to use excerpts from their article on Steve Gurney..