‘Tacloban Declaration’ on disaster preparedness drawn up in Manila 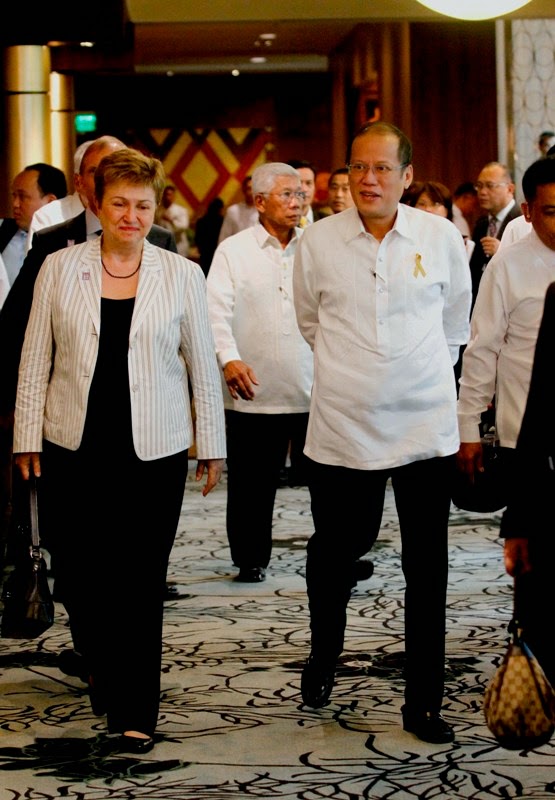 President Benigno S. Aquino III and European Union (EU) Commissioner for International Cooperation, Humanitarian Aid and Crisis Kristalina Georgieva arrives for the Asia-Europe Meeting (ASEM) Conference on Disaster Risk Reduction and Management (DRRM) at the Diamond Hotel in Roxas Boulevard, Manila City on Thursday (June 05) with the theme: “A Stronger Asia-Europe Partnership to Meet the Challenges of Mega Disasters.” The Philippines aims to contribute to the new global architecture on disaster management with the ASEM Manila Conference document to be called “The Tacloban Declaration” which will embody new policies and principles for DRRM. Also in photo is Defense Secretary Voltaire Gazmin. (Photo by Rey Baniquet / Malacañang Photo Bureau / PCOO)

Below is a report on Meeting.


MANILA, Philippines – In the end, the message was clear: Everyone has a stake in building more resilient communities, and the world must act now so that lives would be spared from the “new normal” of mega-disasters.

Some 280 government leaders, scientists, academics, experts and representatives of nongovernmental organizations, civil society and international organizations from around the world underscored the global imperative of disaster preparedness through the Tacloban Declaration, closing Manila’s three-day hosting of the Asia-Europe Meeting’s (Asem) Disaster Risk Reduction and Management (DRRM) Conference.
The experience of the Philippines and the global humanitarian community in responding to Supertyphoon Yolanda (international name: Haiyan) served as the centerpiece of deliberations on the declaration that wrapped up Friday afternoon.
The document was drawn up in remembrance of more than 6,000 people who perished in the rampage of what is considered the strongest typhoon to ever hit land.
The four-page declaration is aimed at introducing “new elements to the global discourse and filling in gaps left by other DRRM platforms,” according to a copy of the document released by the Department of Foreign Affairs Friday night.
Foreign Secretary Albert del Rosario described the declaration as the meeting’s contribution to the “global framework for disaster risk reduction and management for the next 20 years,” building on principles stated in the 2005 Hyogo Declaration on DRRM that lapses next year.
“The Conference adopted the Post-Haiyan Tacloban Declaration, which captured the commitment of the Conference’s participants to advance DRRM cooperation and collaboration, drawing on the best practices developed and lessons learned after Supertyphoon Haiyan/Yolanda,” said DFA Assistant Secretary for European Affairs Maria Zeneida Angara Collinson, conference chair, in a statement.
The declaration underscores the role of all stakeholders—national and local governments, international aid organizations, NGOs, civil society and private individuals—in taking urgent collective action in building grassroots resilience, with the effects of climate change already a reality.
In the document, the conference acknowledged “that DRRM factors/stakeholders have their own comparative advantages and unique roles in DRRM, which should be recognized, harnessed and maximized through coordination mechanisms and partnerships.”
It also emphasizes how DRRM “is an important investment for sustainable development.” According to various estimates, every $1 on preparedness measures saves a country at least $4 dollars in response costs.
The Tacloban Declaration recognizes the “central role” that national governments play in DRRM, particularly in the event of large-scale disasters and in engaging other humanitarian actors towards instituting programs that promote disaster preparedness measures and efficient response mechanisms.
At the same time, the document affirms  “the important role of the local government as first responders and builders of local resilience,” and recognizes the need for DRRM principles to be translated into practical measures that could be implemented on the ground.
Notably, the declaration seeks to institutionalize measures that the Philippine government implemented in the wake of Yolanda, including the transparency mechanism for international aid through the Foreign Aid Transparency Hub (FAiTH), and the “build back better” principle incorporated into the country’s overall rehabilitation plan.
The Aquino administration created the FAiTH website as international assistance flooded the Philippines amid tremendous relief needs in the Visayas immediately after the typhoon. It serves as a public monitoring and tracking tool for all foreign aid disbursements in response to concerns over government’s handling of the billions of dollars pledged and sent to the country to help in relief and recovery efforts.
Commending the Philippine initiative to establish FAiTH, the conference encouraged humanitarian actors and national governments “to incorporate enhanced financial tracking mechanisms such as FAiTH in their operations to promote trust and confidence of the donor community and the beneficiary community.”
Asem also cited the “need to build back better during the recovery and reconstruction phase,” calling on the international community to provide wider access to scientific and technological innovations that could support the development of disaster-resilient physical and socio-economic infrastructures.
The declaration calls for greater cooperation between government and the private sector, urging the latter to “exercise responsibility and contribute to disaster risk prevention, preparedness and mitigation, disaster response, recovery and rehabilitation.”
The declaration also calls  for “the protection, empowerment, and resilience building of vulnerable groups,” including the elderly, the differently abled, women, children, indigenous groups and the displaced, citing how disasters could further worsen their poverty and vulnerability.
It vows to “support a people-centered approach to DRRM, bearing in mind that they are at the core of humanitarian assistance and development.”
The Tacloban Declaration will be presented at the 10th Asem Summit in Milan in October.
Senator Loren Legarda, a long-time DRRM advocate who spoke about the role of women in disaster preparedness during the conference’s plenary session, hailed the declaration as an important contribution to the global discourse on resilience-building.
“The Post-Haiyan Tacloban Declaration will help us in our aim to increase the understanding of disaster and climate science, impacts and policy responses, encourage disaster and climate-proofing of development plans and learn from successful experiences of communities and other countries,” said Legarda in a statement sent by the DFA Saturday.
“It is evident that reducing disaster risks and adapting to climate change have become the greatest humanitarian and development challenges of our time. With the concern and involvement of all nations, we will be able to rise as one human community towards safer, resilient societies,” said Legarda, who authored the country’s climate change and DRRM laws.

Thanks to the Manila Times for permission to run this article.