Ama Dablam - A fascination with a mountain for over 40 years 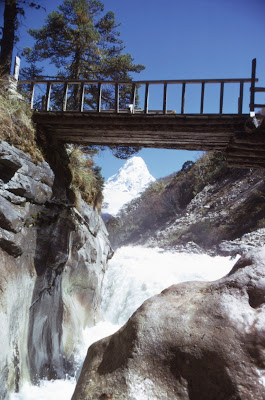 I find the naming of mountains fascinating and in the Himalaya many mountains are seen as a Goddess, God or protector. Forty years ago when I first started trekking and climbing in the Nepal Himalaya, the peak Ama Dablam started a life-long fascination for me. While Sagarmatha, Chomolungma or Mount Everest is the Goddess Mother of the Universe, Ama Dablam appears protected by Sagarmatha, but has her own beauty and meaning. I think it is so fitting that the name fits in so comfortably with the current Yama Panchak festival in Nepal
The main peak of Ama Dablam is 6,812 metres (22,349 ft), the lower western peak is 6,170 metres (20,243 ft). Ama Dablam means "Mother's necklace"; the long ridges on each side like the arms of a mother (ama) protecting her child, and the hanging glacier thought of as the dablam, the traditional double-pendant containing pictures of the gods, worn by Sherpa women. Other writers extrapolate the meaning to "charm box, and is a special pendant worn by elder Sherpa women that holds precious items.” 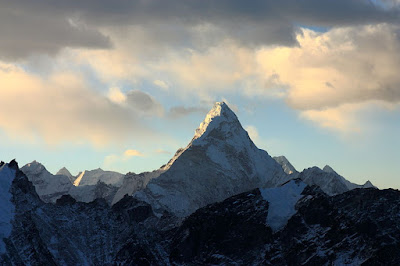 More meaning is added to the ‘mana’ of the peak as it was first climbed by two New Zealanders I know, Mike Gill and Wally Romanes, along with Mike Ward and Barry Bishop on 13 March 1961 They were well-acclimatised to altitude, having wintered over at 5800 metres near the base of the peak as part of the Silver Hut Scientific Expedition of 1960-61, led by Sir Edmund Hillary. I know Mike and Wally personally and you couldn’t find two such humble people.
In all religions mountains are revered and one of my favourite quotes is: “I lift mine eyes unto the hills whence cometh my strength… 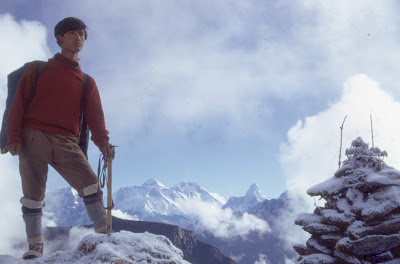 My Sherpa friend Neema from Kunde, on the3 Lumding La with Ama Dablam in the distant background. Photo: Bob McKerrow 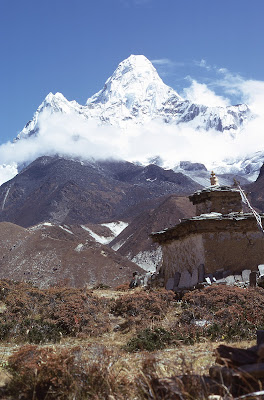 Ama Dablam stands proud and can be seen from so many villages in the upper Khumbu. Photo: Bob McKerrow 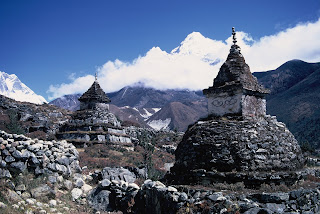 Up in the clouds, Ama Dablam makes a brief appearance. Photo: Bob McKerrow
Posted by Bob McKerrow - Wayfarer at 21:24

Well, the post is pretty impressive and it is glad to read this posting
Weight Gain And Cancer