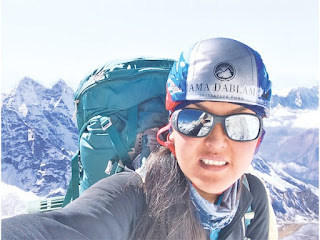 I also took with me plenty of prenatal kits and vitamins to those places for the expecting women and those who had infants. We also tried to aware local women and young girls about possible human trafficking during that time Pasang Lhamu Sherpa Akita


Having ascended Everest, K2, Nangpai Gosum II, Ama Dablam, and many other peaks in and outside Nepal, Pasang Lhamu Sherpa Akita has certainly earned her reputation as a successful Nepali summiteer. Now, as a result of her laudable mountaineering exploits and her self-effacing humanitarian and rehabilitation efforts following the April earthquake, particularly at Laprak in Gorkha, Sherpa Akita has been nominated for the prestigious National Geographic People’s Choice Adventurer of the Year 2016 award.

She talks about mountaineering, her nomination and the post-quake relief work with the Kathmandu Post’s Gaurav Pote.

Before we begin would you tell us a little about yourself. I was in born in Khumjung village in Solukhumbu, but I grew up and completed by schooling in Lukla. Having been brought up in such close proximity to the mountains, my hobbies have always been related with trekking and mountaineering. Eventually I developed interest in travelling and exploring new places as well.

Will you also tell us how and when you started mountaineering? At the age of 18, I started my trekking courses and also began travelling. It wasn’t long before I took up mountaineering training and actually started climbing.

What is it about mountaineering that appeals to you the most? Growing up in the Lukla region,I saw countless tourists and mountaineers over the years. They would all travel for days to get to our small town, far away from their homes, and bravely go on to climb Everest. That somehow sparked the interest in me to be like one of them.

Mountaineering involves high risks; how do mountaineers deal with all the risks involved? High altitude mountaineering is by nature full of risks and dangers. We are constantly under the threat of avalanches and landslides. Rough weather and extreme temperatures put a physical and mental toll on the climbers. It’s easy to get fatigued and develop altitude sickness or catch frostbites. Then there’s the harsh terrain with crevasses and blizzards that torment us throughout our expeditions. At the end, all these risks reflect the terrible uncertainty that comes with the mountaineering profession, and we all try to minimise these risks by using our training, experience, and intuitions. Staying fit physically and taking precautions every step of the way is paramount as well.

Give us a brief rundown of some of the peaks that you have climbed so far. The first peak I scaled was the Everest back in 2007. Last year, I climbed K2 as a member of the first Nepali all-women expedition there, Nangpai Gosum II as a part of the first women expedition, and Ama Dablam with the first French-Nepali women expedition. Besides these, I have also scaled other Nepali, American and French peaks.

Now, tell us about your nomination for the National Geographic’s Adventurer of the Year 2016. What were the criteria for selection? Every year, National Geographic short lists 10 extraordinary adventurers from the world over who push the limits of their respective discipline. One of them gets voted publicly by folks around the globe as the People’s Choice Adventurer of the Year. The reason for the nomination in the 2016 edition of this prestigious award is my engagement in the immediate and post-earthquake relief work in rural Nepali communities. I think it is a great opportunity to represent Nepal. I am really looking forward to that.

And, how do you reckon people should go about voting for you? National Geographic announced the names of the nominees, including their video profiles and photographs,on their website last week. Even a simple Google search should take you there. Click the link to vote. The voting is open every day through January 31, 2016 and the announcement of the winner is scheduled in February 2016.Since it is a people’s choice category,it is really up to the voters to decide who wins. So, naturally, I would like to urge everyone to make a small effort to vote for me. That said, this nomination alone is quite prestigious but winning will surely help my cause even more.

Can you talk about your humanitarian efforts after the earthquakes? I was caught in an avalanche near the Everest basecamp at the time of the first earthquake. I somehow managed to find my way to the basecamp and assist the people stranded there. The next day, I returned to Kathmandu and after making sure everything was secure at home, I started gathering relief materials including food, drinking water, mattresses, and tarpaulins and began mobilising them in and outside the Kathmandu Valley. We also travelled to Nuwakot, Dhadingbesi, Gorkha, Sindhupalchowk, Kavre, Dolakha, Manaslu, and many more rural places. I also took with me plenty of pre-natal kits and vitamins to those places for the expecting women and those who had infants. We also tried to raise awareness among local women and young girls about possible human trafficking during a time of crisis. And at a devastated Laprak, which is quite close to the epicentre, we constructed temporary shelters for the elderly.

So, what keeps you busy these days? Apart from the on-going relief work and rural health camps, I am also currently involved in mountain guiding. And, what’s next for Pasang Lhamu Sherpa Akita? I’m going to continue mountain guiding and, on the side, focus on facilitating girls’ education, particularly orphans and those who come from underprivileged families affected by the earthquakes.

Thanks to the Kathmandu Post for permission to run their article published: 17-11-2015
Posted by Bob McKerrow - Wayfarer at 04:13