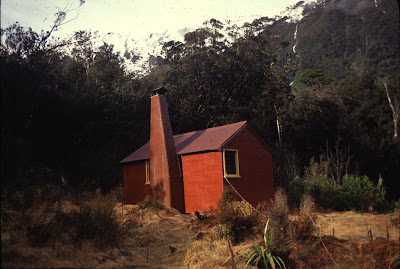 Moonbeam Hut (above)is one of my favourite West Coast Huts as it stands midst pristine bush, and is a gateway, upstream, to the high mountains and, downstream, a start for some of the best kayaking on the West Coast. It is one of those rare huts where you can have climbers, kayakers, shooters and trampers under one roof for the night. 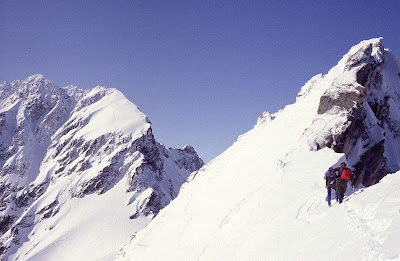 At the head on County Stream, which forks off from the Waitaha valley, is Mt. Evans (left)and Red Lion Peak (high peak) right. The photo was taken on the first winter ascent of both peaks of Red Lion in August 1992. Photo: Bob McKerrow.

But read on, for at the end of the article, I have just discovered news that developers (westpower) may ruin the lower reaches of the Waitaha River by building a hydro-electric plant on the lower reaches at Morgan Gorge. GOD SAVE NEW ZEALAND !!!

Moonbeam hut can be found on the true left of the Waitaha valley on a terrace 10 minutes upriver from Moonbeam Torrent. Surrounded by pleasant montane rata/ kamahi forest it provides a mid-valley stopover for those heading to the head basins of the Waitaha River or the County Stream. 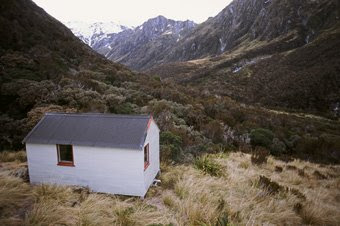 I used Moonbeam and County Huts after the first winter ascent of the high and low peaks of Red Lion in 1992. I climbed the Red Lion peaks with an overweight and unfit Publican who was 'Le Patron' of the Red Lion Hotel in Hokitika, and the peak was named after his pub in 1865 by two surveyors who used to drink at the Red Lion Hotel, and who first surveyed the area. What an affort it was getting Peter Hill (photo below)up an 8,000 foot mountain in winter. But with a few friends we managed it.

I remember clearly our final camp at 5,000 feet in the upper couny stream. Getting Peter Hill ready for the climb was a hoot. It was 8 degrees Celsius below. He didn't know how to put his gaiters or putties on so Rod Buchanan offered to help. The cotton gaiters had frozen and Rod was wrestling to get them on with his head between Peter's legs. As he looked up, he remarked, " Now I know hos Queen Victoria's gynaecologist must have felt." 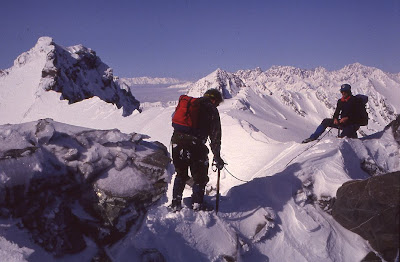 Peter Hill, on the top of the low peak of Red Lion, heading for the high Peak on the left. Photo: Bob McKerrow

County Hut is located in the headwaters of the County Stream in the Waitaha valley. This is an area of superb, rugged, and remote West Coast high-country. The upper County basin is open tussock and extends up to the pristine alpine snowfields, glaciers and ice plateaux of the Mt. Evans massif.The Hut is perched above the true right of the County Stream just below the Bloomfield Creek confluence. Vegetation around it is mixed alpine scrub and tussock and there are views of the Smyth, Bloomfield and Hitchen Ranges. 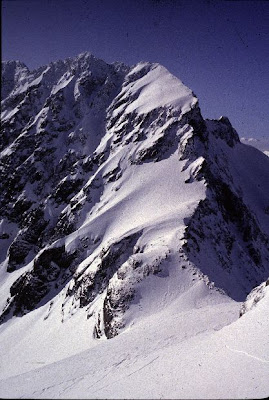 I have written and showed photos of what is above my Moonbeam Hut, but below it, is some of the best white water paddling in New Zealand. Thanks to Zak Shaw for providing this information. 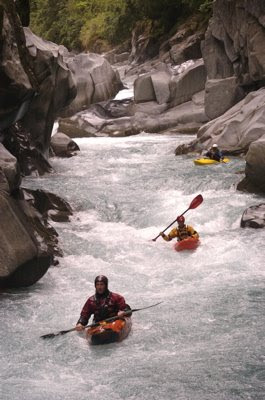 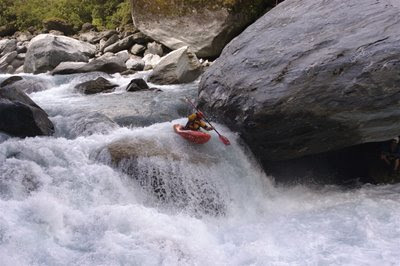 The Waitaha is a big day by any one's standards. Most parties take between six and nine hours to break down the continuous class 4-5 rapids that exist below Moonbeam hut. The difficulty of the whitewater is unrelenting and is mostly found in several committing bedrock gorges.
Once the third gorge opens out and the valley walls widen the intensity backs off briefly before smooth schist walls rise again and the river dramatically carves its way into the heart of Morgan gorge. 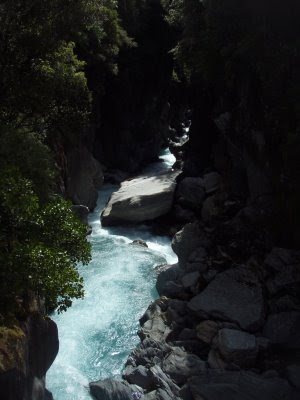 This is what they are planning to ruin with a dam. Morgan Gorge. Photo: David Taylor Maurier

We stand to loose one of New Zealand's most stunning river gorges, the Morgan Gorge. An area of pristine wilderness and supreme beauty the Waitaha river in years to come will find itself becoming increasingly threatened.


In the words of kayaker Zak Shaw "Its the classic river dichotomy. To construct a single turbine hydro scheme or realise that 40mw of power is bugger all and the sacrifice is far from being worth it. This time its the Waitaha that will be exploited. "We stand to loose one of New Zealand's most stunning river gorges, the Morgan Gorge. An area of pristine wilderness and supreme beauty the Waitaha river in years to come will find itself becoming increasingly threatened." Read Zak's blog
http://passion4adventure.blogspot.com/2008/01/new-zealands-waitaha.html

What has Westpower to say about this ?

15/11/2007 - Lines company Westpower is looking at building a 120Gwh hydro power scheme on the Waitaha River, 15km south of Ross on the West Coast.


Chairman Mike Newcombe said on Wednesday the scheme would be situated where the river flowed through the Morgan Gorge, below Kiwi Flat, at the head of the valley.

The proposal -- which would generate about half the power of Trustpower's proposed 46MW Arnold River scheme near Greymouth -- would have a peak output of about 20MW.

Westpower said it had already undertaken an environmental risk assessment and started flow monitoring of the Waitaha. Consultation with interested groups would be held.

Green Party conservation spokeswoman Metiria Turei said she would be keeping an eye on developments.

"A hydro scheme in the Morgan Gorge would intrude on a pristine and rugged valley, much valued for its biodiversity and recreational opportunities," she said.

Westpower is also working on reopening the old Amethyst hydro scheme on a tributary of the Wanganui River, near Harihari.

It hoped to lodge the consent application for that scheme in the new year.

Meridian Energy has an even larger proposal for the Mokihinui River, in northern Buller.

That would generate about 20MW more than the Arnold River scheme, and the company also hoped to lodge the consent application soon.

This depresses the hell out of me. Where will it end? When all the breathtaking gorges and wild rivers have been converted into big ponds for jetskiers and the demand for power continues, what will be sacrificed next?

I know the country you write about here: my brother and I visited Scamper Torrent before it started to become a more popular destination, and I camped on the County Glacier and attempted Evans with a mate in '04. It's hard country, unforgiving, beautiful in a way few other than those who've been there understand. We need places like this, not just for the benefit of the hard men and women, but for those who whose spirit needs to know true wildness doesn't simply survive but flourishes. The thought of the Morgan Gorge drowned fills me with horror.

Apart from being a sensitive man, you must be quite a tough cookie. Evas is no stroll and when the weather changes, it can cut up rough on the County Glacier, What beautiful views of the Evans and Red Lion from there.

Where will it end , you ask ? Windmills on the Tararuas, and a hydro electric scheme in Morgan gorge ? I mentioned that song paul Powell wrote about 'Vandals of the Public Works' to the tune of God defend New Zealand. He writes,

I am glad Zack Shaw's blog has alerted us to another act of vadalism.

Kia ora Bob,
Thanks for this. The supposed increase in wind farm implementation was suppose to also relieve the continued intrusion upon the south island water ways. The Mokohinui another heritage resource west coast river under threat. This will not stop.
I am talking to people every day right now who live under the shadows of the Tararua's and Ruahines and whom have no idea of what is happening here. I am getting help from a lovely blogger writers to put a petition on line which I can then present with my objection to these insidous plans for our mountains. I will follow your link and also join the fight for our rivers. Cheers Bob, I love that first photo of Moonbeam hut. Something inside is always stirred by such an atmosphere. Maybe one day we can share a wee dram in such a place. Have a great day.
Rangimarie,
Robb

I know we can block these petty-minded, penny pinching schemes by lobbying at high level, PM, Parliamentarians and our local MPs. I will even talk to the NZ Ambassador in Indonesia who is a South Islander and loves the bush and hilld.

Robb, I think of nothing better than you, I and Pete, spending a night in Moon Beam Hut. Once I get my new knees (an operation planned for November) I will be striding the ranges again.

Kia ora Bob,
If you stop by I have a link to a petition I wrote up with the help of a few lovely people. Have a great day Bob.
Cheers,
Robb

Will be happy to sign your petition. Might start doing one on the possible damming of the Morgan Gorge on the Waitaha River. Am checking with Westpower to see how likely this is.

Have all these people gone mad. There must be other ways. I thought most of the west coast is protected area. I can imagen your concern if they plan to break down this beloved area. Hopefully this can be stopped

Thanks for your concern. Certainly large parts of the West Coast are protected areas, but Westpower has a hunger for more West Coast power generating plants and won't stop at destroying a river or two. I am making enquiries as to where they are in the assessment phase.

Kia ora Bob,
Please keep us advised. Let's carry on the fight. I did an earlier post on the Mokihinui, and it is a cultural heritage area they are after there. Shocking!
Cheers,
Robb

Always good to have your support and feedback.
I will read the one on the Mokihinui, and it is a cultural heritage area.

Someone told me someone wants to put handrails up to the top of Mt. Taranaki ????

Is Bigfoot Actual or false? For over four hundred many years, there are actually reporting’s of a man like monster that is certainly wholly coated in hair.
[url=http://www.is-bigfoot-real.com/]skunk ape[/url]

Hi Bob,
I caught a glimpse of Mt Evans today fro Lake Kaniere. Didn't know what it was, but I recognised it as one of the peaks I saw by Lake Coleridge when I drove from Lake Lyndon to go skating at Lake Ida. Worke out from Google Earth & top maps which it was. beautiful mountain ... that photo of the climber near the summit on the Tea Ara site is incredible ! Not much of a climber me, done a fair bit of caving, mostly up north + Nettlebed & Harwoods. I spend a lot of time exploring the forest, streams, coast taking photos. Also passionate about conservation. You may know Andy England, a kayaker from Greymouth ? He's made a film to try & help save our wild rivers like the Mokihinui. You can catch up with us on facebook if you like.
You can find my pics most anywhere you search Steve Reekie or New Zealand Wild. Cheers, Steve

It cannot succeed in actual fact, that is exactly what I think.

kia ora Bob, recently heard that Westpower is seeking a concession from DoC to proceed with the Waitaha hyro scheme.http://www.radionz.co.nz/news/national/315572/kayakers-oppose-west-coast-hydro-scheme-proposal.

DoC again already appears to be bending over on this which is real cause for concern, not just with the loss of a truly wild place but the precedent that sets for the 30% of other NZ "Stewardship" wilderness. Also in light of the DG's response on the Ruataniwha Dam debacle is particularly alarming and increasingly looks like Big business rules!

Did you have any success with your enquiries and/or aware of folk opposing this on the coast?