"I want to eat your liver." Jason Elliot is emerging as one of the world’s great travel writers with a style somewhere between Robert Byron and Peter Fleming. His works include An Unexpected Light: Travels in Afghanistan (1999) and Mirrors of the Unseen: Journeys in Iran (2006).

Jason stayed with me twice during his journey in Afghanistan late in 1995 and again in early 1996 when he was writing An Unexpected Light. I was flattered when the book came out, as the first words in his book are, ‘ Dear Ropate’ which is the name he calls me. It is Maori for Robert.

In 1998 he flew from London to Almaty to be at Naila’s and my wedding, but was deported on the return flight as he didn’t have a visa. He came back a month later with a visa and we travelled in Kazakhstan for ten days together. It was winter, and as we drove and walked in the mountains, it frequently was snowing. I remember walking with Jason to a mountain pass in the Tienshan mountains at 4000 plus metres, and eating salami with Russian bread and washing it down with a bottle of red wine, as huge snowflakes swirled around our heads.


I phoned Jason last night. He was in London. We phone about once a year and share our comings and goings.
I joked with Jason about a beautiful Kazakh lady who had fallen in love with him when he visited us in Kazakhstan. I said “you left her broken hearted and she is still in love with you.” I told Jason that her name in Kazakh means love. Jason, fresh out of Persia (Iran) replied, “In Persia when you love someone deeply, you say, I want to eat your liver.”
We spoke about his first An unexpected light which his publishers are about to republish as a classic.

Jason went to Afghanistan in the 1980s at the age of 19 to live with the Afghan resistance, or mujahideen.

Here he looks back on the chaos of combat and reflects on how a patriotic cause became embroiled in foreign ideology. 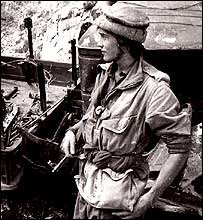 I had arrived at a mujahideen headquarters at a tiny little ravine on our route towards Kabul from the Pakistani border.

One of the men had been injured after stepping on a landmine. The commander gave me a shawl the injured man had been wearing and told me I could wash it. It was soaked in his blood but I just saw a dirty shawl. I put it in the river, pushed the fabric down and saw the water turn red.

It was a defining moment - I realised this was the blood of a real man and he was dying at that moment on the donkey at the end of the path.

From those simple beginnings as a young adventurer at 19, Jason Elliot has blossomed into a seasoned travel writer, possibly the best in the world. I value his friendship.
Posted by Bob McKerrow - Wayfarer at 21:30

I'm just re-reasding Robert Fisk's "The Great war for Civilisation" which has quite a bit about Afghanistan in it. Terrible suffering has happened there over the last 30 years or so and it doesn't look like they are any closer to a solution.

There is an article on the Timaru Herald website today about some Red Cross nurses who served in Vietnam during the war. I am sure that you know them and might find the article interesting.

Hi Gollum. Robert Fisk's "The Great war for Civilisation" is a wonderful piece of writing and analysis. Yes, poor old Afghanistan has for centuries, been penalised by its geographical location. It really is a crossroad between Russia and British India, Persia and India, and the main route of Alexander the Great, Chenghis Khan, Timur (Tamerlane), the invading Bristish, Persian, Soviets and Russians. Now we have new invaders.

I must go to the Timaru Herald website and check out the NZRC nurse who worked in Vietnam. What country are you working in Gollum ?

I'm currently working in Singapore. Been there for around 12years or so. But I'm likely to be moving to the Middle East in the New Year - even further away from those New Zealand mountains.

I just hope there's some wilderness left in New Zealand by the time I retire and move back.

Ah ! Singapore. The big supermarket, but it has its charm. When I first visited in 71 it was really the Orient. A little of that charm remains. I love going down the Singapore river by boat and dreaming what it was.

Don't worry my brother, when you retire there will be lots of wilderness left to enjoy. Our conservation policies are strong.

I am always stunned when I read your stories. It sounds like a fairytale eating Russian bread and drinking wine with a travel writer in the mountains with snowflakes dropping around you. Did you write travel stories You could easily do that. I love travel stories and read a lot of them in Dutch and some in english. Thanks for the tip
I can imagen that Kazakhstan lady falling in love. This writer is amazingly handsome if I may say so.

Yes, Jason is a handsome man and a great writer. Many women have fallen in love with him.

I appreciate your feedback on this story. Am i a travel writer / I love writing and was once editor of the NZ Adventure magazine. It wsa great to write, photograph and edit full time. That was 18 years ago and I was unable to support a family of five children on that.
Like the tulips, my time will come to stick my head up and write full time. Have a relaxing weekend.

I have just finished reading An Unexpected Light for the second time, and read Jason Elliott's book on Iran over Xmas. He is indeed a great writer. I am currently working on a research project among Afghan refugees living in the Netherlands, who have revisited Afghanistan in the last couple of years. Two themes keep cropping up in the interviews, the first is the extent of the corruption everywhere, and the second is their shock at how much the people in Kabul have changed. They comment on the lack of friendliness and respect, the avarice of the shopkeepers and taxi drivers. They are all saddened by the changes the ongoing conflict has wrought in the Afghan population. As one elderly gentleman put it: They can rebuild the whole city, but they can never fix the people. Reading Jason's book for the second time, I often thought how well he described the dignity of the Afhan people, and sadly, how much everything must have changed since he wrote the book.

The article is very interesting. And I also want to share articles about health, I'm sure this will be useful. Read and share it. Thank you very much :)

Excellent Blog! I would like to thank for the efforts you have made in writing this post. I am hoping the same best work from you in the future as well. I wanted to thank you for this websites! Thanks for sharing. Great websites! Packers And Movers Bangalore

This article is really fantastic and thanks for sharing the valuable post.Please Visit our wonderful and valuable website: Packers and Movers Gurgaon, Local Shifting Relocation and Top Movers And Packers Gurgaon. Best Household Charges @ Packers And Movers Gurgaon