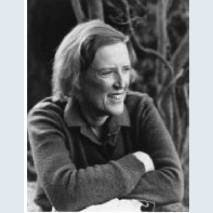 “We are leaving in an hour to live on a tropical island for a long time, and I am giving you a box to pack your books in. You can only take ten,“ I said to Margaret Mahy as we sat on her balcony at Governor’s Bay overlooking treetops and bush, towards the sea.
“Ohhh, that’s going to be difficult to chose, “ she said, as a smile broadened on her face.
She thought hard as she gazed into the bush. “I’ll have to take something of Dickens,” and deliberated.
“King Solomon’s Mines is a must: I like Rider Haggard very much.”
And, I will have something by Lewis Carrol, perhaps Alice in Wonderland or Through the Looking Glass,” Margaret said quite excitedly. She decided on Alice.
Her dog Honey sat at her feet as we talked. 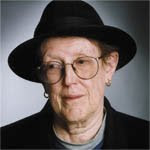 Margaret Mahy, pictured left, was obviously enjoying herself as the warm winter sun shone on the balcony and warmed us up. My daughter Aroha and friend Lisa were with us enjoying the sun.

“That’s three books,” I said and sat back in my chair and waited.

“ I’ll have to take The Flint Heart for that is such a good book” Suddenly I felt embarrassed. I have never heard of The Flint Heart. Margaret sensed my disquiet and gave us a brief summary of the book written by Eden Philpotts and how the hunter found a large rock, and when he broke it open, there was a flint heart.

“ I suppose I should take the Bible.” That was five books. I noticed there were none on poetry and humour and waited.

Eventually she decided on two poetry books, one on English poets and another, an anthology of poets from all over the world. We were now up to seven.
I said, “ Margaret, you haven’t chosen any books that are solely humour.” She thought awhile and said, “what would you recommend ?” I didn’t have to think for long as I rattled off, “ A Dustbin of Milligan by Spike Milligan.”

She laughed and said “ He’s so funny and I loved the Goon Show.” She agreed to take Spike Milligin. Somehow we both ran out of steam and the game was over. But that is Margaret Mahy, the child who in her youth, her favourites were The Flint Heart by Eden Philpotts, The Jungle Book and Rider Haggard’s King Solomon’s Mines with the stoic Allan Quatermain crossing the desert to the mythical diamond mines. And then there was Kipling.

We discussed Glover at length and I was pleased she had the same high opinion of him as a poet, printer and publisher. I told her she was the third top NZ writer I had met. She quickly rose to the bait, and said “ Who were the others?.”
I told Margaret I met Denis Glover in 1973 when he worked in Lower Hutt at the Correspondence Institute and he autographed my copy of his book, Enter Without Knocking. Then when I lived at Franz Josef, I visited Kiri Hume a number of times and one night we drank two bottles of whiskey together. Her eyes twinkled and said, “ I would have like to have been there.”

Earlier in the morning we ate breakfast together, in her old house next to her new one, where her friend Lisa Anson lives. Lisa is an old friend of mine who invited me out for breakfast and said, " You may get the chance to meet Margaret."
Over bacon and eggs, we discussed poetry, but in reality we were trading poems, one by one. I quoted two verses from my favourite Robert Frost, The Bearer of Evil Tidings.
He took the one to the mountains.
He ran through the Vale of Cashmere,
He ran through the rhodendrons,
Till he came to the land of Pamir.
And there in a precipice valley
A girl of his age he met
Took him home to her bower
Or he might be running yet.
Margaret responded with one of her favourites from Banjo Paterson -
A Job for McGuinness

Oh, it's dreadful to think in a country like this
With its chances for work - and enjoyment
That a man like McGuinness was certain to miss
Whenever he tried for employment
.

He wrote to employers from Bondi to Bourke,
From Woolloomooloo to Glen Innes,
But he found - though his wife could get plenty of work -
There was never a job for McGuinness.

But perhaps - later on - when the Chow and the Jap
Begin to drift down from the tropics,
When a big yellow stain spreading over the map
Provides some disquieting topics,

Oh, it's then when they're wanting a man that will stand
In the trench where his own kith and kin is,
With a frown on his face and a gun in his hand -
Then there might be a job for McGuinness!
The few hours I had with Margaret Mahy were fascinating. A delightful woman with an impish sense of humour, and so unpretentious. We must have traded six or seven poems, volleying like young Wimbledon players. I feel she won with her passion and accuracy
She was deeply interested in my work over the years for Red Cross and she modestly told me how she had given a lot of support to UNICEF.

Before I left I presented her with my book on Afghanistan, Mountains of our Minds which includes poems I wrote and photos I took. I read her my favourite, Refugee Woman. Margaret asked many questions and displayed a child=like curiosity during our time together.
For those of you who don;t know Margaret, here is what the NZ Book Council has to say: Margaret Mahy is the most acclaimed of New Zealand’s children’s writers. The author of more than 120 titles, and translated into 15 languages, Margaret has readers across the globe. She worked as a librarian for more than 10 years before becoming a full-time writer. Mahy’s books ring with humour, fantasy, adventure, science and the supernatural, but always engage with the ordinary world. Awarded the Order of New Zealand in 1993, she has also won many of the world’s major prizes for children’s writers, including the Carnegie Medal and the prestigious Hans Christian Andersen Award.
I sensed Margaret needed to get back to her writing, so Lisa, Aroha and I took her dog, Honey, for a long walk over the Port Hills. On the way back to Christchurch I stopped into to have afternoon tea with Colin and Betty Monteath. Colin is a prolific writer on Antarctica and mountaineering. That, and many other experiences, during my one month long holiday in New Zealand will have to wait. I returned to Jakarta last Saturday night, inspired. That world famous children's writer Margaret Mahy left a huge impression on me. I am scrambling to find a copy of The Flint Heart.
Posted by Bob McKerrow - Wayfarer at 21:34

Very exciting post. What an interesting meeting and how lovely to exchange poetry. Alice in wonderland is one of my favourites as well. There is a lot of food for thought in that book. I haven't read a book by margaret yet but she is on my list.

Kia ora Bob,
Somehow I think Margaret enjoyed that breakfast every bit as much as you did. Thanks for the thoughtful ring before you left. Hope we can share a bottle of our own on your next visit! Kia kaha Bob.
Cheers,
Robb

It was an interesting meeting and a most creative and interesting lady. Alice in Wonderland is a favourite of mine too. Thanks for your feedbacl.

It was a memorable breakfast and capped off a fine holiday in NZ.

Let's plan to meet next time.

Dear Bob, what a lovely breakfast. You made me feel like a fly on the wall, listening in to what this Astrid Lindgren of NZ has to say. Am back in NY after holidays and can hardly wait to start go to all these readings. Am impatienly awaiting Paul Auster's new book in November. Went to one of his literature lectures and it was simpy fabulous. Cheers, Maude

Pleased to learn you are back in New York and enjoying life and literature. Does Astrid Lingren write in English ? I will keep a look out for her books. I will also try and find more about Paul Auster. Thanks for your feedback on my posting about Margaret - an amazing writer and person.

Today, I went to the beachfront with my kids.
I found a sea shell and gave it to my 4 year old daughter and said "You can hear the ocean if you put this to your ear."
She put the shell to her ear and screamed. There
was a hermit crab inside and it pinched her ear.
She never wants to go back! LoL I know this is totally off topic but I had
to tell someone!

Nice post. I was checking constantly this blog and I'm impressed! Very helpful info specifically the last part :) I care for such info much. I was looking for this particular info for a long time. Thank you and best of luck.

Also visit my webpage: do you agree

Thank you, I have recently been searching for info approximately this topic for
ages and yours is the best I have came upon so far. However,
what about the bottom line? Are you sure concerning
the supply?

Look into my site :: pornharvest.com/index.php?q=nubiles+kadence&f=a&p=s

WOW just what I was looking for. Came here by searching for halifax share trading

I am regular visitor, how are you everybody? This post posted at this website is really pleasant.


Look at my blog check it out

It's an awesome article designed for all the internet visitors; they will get advantage from it I am sure.

Wow, that's what I was looking for, what a information! present here at this web site, thanks admin of this web page.

I know this if off topic but I'm looking into starting my own blog and was wondering what all is needed to get setup? I'm assuming having a
blog like yours would cost a pretty penny? I'm not very internet smart so I'm
not 100% sure. Any tips or advice would be greatly
appreciated. Kudos

Feel free to surf to my web-site :: professional painters

Thanks , I've recently been searching for information about this subject for ages and yours is the best I've found out so far.

But, what in regards to the bottom line? Are you certain concerning the source?


Check out my web page: a good training session

Hello everyone, it's my first go to see at this web page, and article is actually fruitful for me, keep up posting such content.

Thank you for the auspicious writeup. It in fact was a amusement account it.
Look advanced to far added agreeable from you! By the way, how could we communicate?