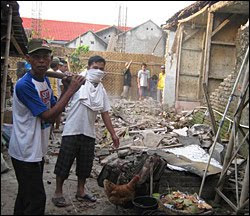 People are clearing the rubbish from collapsed houses in Ciamis after an earthquake hit West Java. Photo by: Kikin Kuswandi/Indonesian Red Cross

This afternoon I was driving between offices in Jakarta when I saw hundreds of people running out of a high rise building onto the street. A few seconds later I got a text message saying a large earthquake had struck near Bandung.

I got confirmation from the Indonesian Red Cross (PMI) that it had caused some damage in and around Bandung. 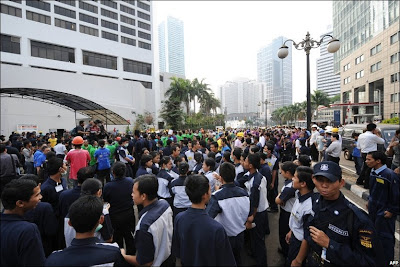 People rushed out of buildings in Jakarta when a violent earthquake shook the capital.

At the meeting with Danish, French, Honk Kong and Spanish Red Cross we pieced information together from computer maps and messages we received from the field. A tsunami warning was issued but fortunately the wave generated was quite small and caused little damage.

Most of the area that is severely damaged is the coastal area in southern part of Indonesia. Communication line still disturb in Tasikmalaya in Banjar reported electricity cut off due to effect of the earthquake, 5.000 idps in Sindang Barang Cianjur. In Bandung 13 Village in pangalengan subdistict reported severely affected affected, 30 idps in Cimaung Bandung. For time being reported that 22 people died (Ciamis 2 people: Cianjur 12 people: Bandung 6 people; Garut 3 People) and 29 people injured, also reported that 810 houses damaged and 16 public facility building collapsed.

Immediate need for survivors are tarpaulins and tents 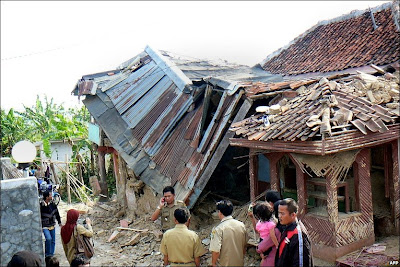 I arrived home six hours after the quake and Naila, my wife, was still somewhat shaken by the quake. "First I heard a loud noise then the building started swaying, the lights swung violently and I heard people screaming and talking loudly", she said.
She then told me how she joined a huge throng of people rushing down the stairway in this 30 floor building, and of people tripping, fainting, children and Mothers screaming. Old people struggled to get down the stairs and she said it was like a scene from a horror movie.

Then she showed me all the cracks in the apartment that were caused by the quake. A huge crack ran diagonally across the wall in the boys bedroom where they were sleeping peacefully. The kitchen, hallway and lounge walls all bore cracks as well.

Before i went to bed I got a detailed report from the Indonesian Red Cross and was delighted to read of their efforts in rescue, tending to the injured and providing food and shelter to the homeless. Wayne, our Disaster Coordinator has released large numbers of relief items from our warehouse in support of the PMI efforts.
Posted by Bob McKerrow - Wayfarer at 03:44

you have a nice site. thanks for sharing this site. there are various kinds of ebooks are available here

The other day, while I was at work, my cousin stole my iphone and tested to see if it can survive a thirty foot
drop, just so she can be a youtube sensation. My
apple ipad is now destroyed and she has 83 views.
I know this is completely off topic but I had to share it with someone!

Woah! I'm really loving the template/theme of this website. It's simple, yet effective.
A lot of times it's very hard to get that "perfect balance" between superb usability and appearance. I must say you have done a great job with this. Additionally, the blog loads extremely quick for me on Chrome. Superb Blog!

Hi friends, nice paragraph and nice urging commented here, I am
genuinely enjoying by these.

I got this website from my friend who informed me on the
topic of this web site and at the moment this time I am browsing this website and
reading very informative articles or reviews at this place.


Feel free to surf to my weblog; hair weave ()