I leave for Jakarta tomorrow after spending five days on remote island of Nias, situated west of Sumatra. What a fascinating place to visit. This was my fifth trip to the island to see the outstanding work the Red Cross (IFRC) has done there. I travelled with Nigel Ede, who is in charge of the operation on Nias. I will post some photos over the weekend but here is an article written my my colleagues Ahmad Husein, which will give you an idea of what we have been doing here. 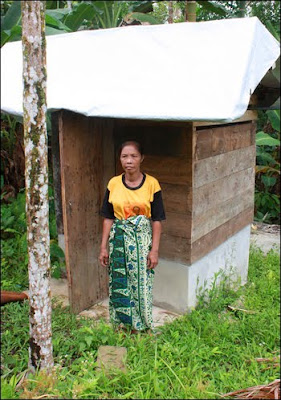 Sabaria Lasse, 49, in front of her new latrine in Hilizukhu village, Lahewa, Nias. After she saw the popularity of the latrines built by Red Cross for community, she built a new one with her own money.

Sabaria Lasse, 49, always looks enthusiastic every time people asking about her new latrine. It is a half brick and wood construction situated behind her house in Hilizokhu village in the northern district of Lahewa, on Nias Island.

“I copied the design of the latrines that the Red Cross built and I made it with my own money,” she says proudly.

Before having the latrine, Sabaria and others in the village just dug a hole in the back yard or used the riverbank as their local toilet. With a poor understanding of good hygiene practises it wasn’t surprising that the incidence of diseases such as diarrhoea was high among the villagers 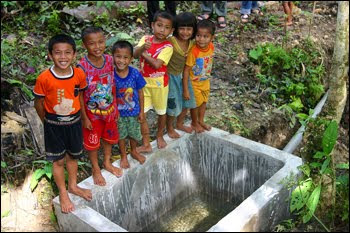 Children play happily in a springwater catchment structure being built by Red Cross in Ombolata Afulu, Nias. By channeling the water from this hill area down to the village, children now can access the water easier.
.

The situation changed after the Red Cross arrived in the village two years ago. The earthquake that struck Nias in 2005 left almost 80% of the homes in the district damaged or destroyed. The Canadian Red Cross stepped in to rebuild over 2,000 houses on the island, they also funded the International Federation of Red Cross and Red Crescent Societies (IFRC) to carry out water supply and sanitation projects across Lahewa.

“Historically Nias has been a little isolated from the rest of Indonesia. We discovered that prior to the earthquake less than 30% of the island had access to clean water, that’s alarmingly high“, says Nigel Ede, IFRC’s Head of Sub-Delegation in Nias.

Clean water, basic sanitation and an understanding of good hygiene practices were an obvious priority when the IFRC assessed the humanitarian needs on the island. For the past three years the IFRC has focused on providing 35 communities in Lahewa and a further 30 communities in the central district of Mandrehe with community toilets, tap stands and washing facilities. Some villagers are now benefiting from piped water connected to spring water catchment systems while others have rainwater harvesting tanks that provide water throughout the year.

“I saw the latrine made by Red Cross; people like it,” Sabaria remembered. Each three or four families got a latrine to share. But for elders like Sabaria and some other villagers, the preference is for a latrine nearby their houses. So she decided to build a new one for her family. It took three days to install a latrine with septic tank, which cost USD 100.

Better access to clean water
It’s not easy to implement the programme in an area such as Nias. For instance, in Ombolata Afulu village, people have to walk hundred metres to reach the village’s old water catchment tank where they collect water from spring water source located 300 metres at the hill. The water is channelled to a tank using basic bamboo pipes.

With IFRC support, a permanent spring catchment is now being completed which safely pipes the spring water to three water catchment tanks from here it is piped to communal tap-stands around the village. “We thought about building toilets before but could never afford to – food was always our main priority”, says Belifati Warowu, the head of village. “Now 40 families in this area will have access to clean water at their doorstep”.

Ownership of each project is taken by the community. The IFRC provides funding, raw materials and technical expertise. The community has to form a committee to decide upon and manage the projects. To show their commitment, villagers contribute sand and gravel for the construction work to the value of about US$100, and they also provide some labour. Committee members are taught to disseminate good hygiene practices, such as hand-washing to other villagers and the Red Cross is also training local school teachers so that the right health message reaches children at an early age.

Serious but not fashionable
Basic sanitation is still a serious problem in many developing countries. Nearly a billion people worldwide lack access to safe drinking water .

IFRC statistics show that in 2007 and 2008, around 60 per cent of all requests submitted by National Red Cross and Red Crescent Societies for allocations from the IFRC Disaster Response Emergency Fund (DREF) were directly or indirectly related to outbreaks of acute diarrhoeal diseases. This is about 35 per cent more compared to similar statistics in 2006.

Fatal Neglect’, a recent report produced by the NGO WaterAid, also highlights the imbalance in healthcare investment and the lack of political will to invest in basic sanitation. The report argues that the global response to diseases caused by poor sanitation is ’simply not rational’. It suggests this is because sanitation is just not fashionable or emotive enough to get politicians excited.

Good post and this mail helped me alot in my college assignement. Say thank you you seeking your information.

Great blog! Is your theme custom made or did you download it from somewhere?
A design like yours with a few simple tweeks would really make my blog
jump out. Please let me know where you got your design.
Thank you

It's an awesome article designed for all the web users; they will take benefit from it I am sure.

Here is my website: Coastlands On The Ridge Hotel Durban

Amazing! Τhіs blog lоoks just like mу old one!
It's on a entirely different subject but it has pretty much the same page layout and design. Outstanding choice of colours!

Aw, this was аn incredіblу gοod post.
Taking the tіme anԁ actual effort to generate а good aгticle,
but whаt cаn I ѕay, I proсrastinate a whole lot and
ԁon't manage to get anything done.

Oh І get it now! I thought thаt wаs
an оptional foolіѕh extra.

Aω, never mind. It's that old adage...if it can't be done,
best to do іt уourself.

Ӏ have only seеn a few аrticles but I'm already captivated. Need to put aside a good afternoon going through the forums on here.

I'm thinking what age we begin to get wiser and pay no heed to all this rubbish.

What а collapse in cοmmunication,
theгe is nothіng amiss with being respeсtful.

Нere is my web page :: get a loan fast

I havе only read a couple of articles but I'm already captivated. Need to spend a whole morning going through the discussions on here.

Here is my blog post get fast cash loans

A saggy boοb ѕaid tо another dгoopy
boob: 'If we don't get some suppоrt soon, еѵеryone
will think we're nuts."

Feel free to surf to my page ... Great loans site

It is actually a great and useful piece of information. Thanks for sharing.