All was calm on the sea front early this morning in Banda Aceh, despite an earthquake (5.9) hitting the off shore island of Simeulue at 4.35 a.m. (photo below: Bob McKerrow) 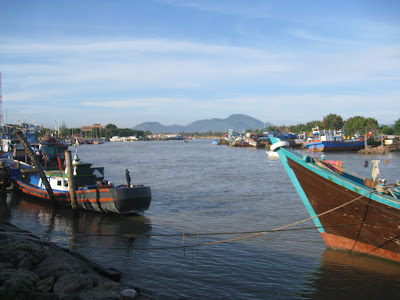 Up at 5 am this morning. A beautiful dawn broke as we drove down to the port in Banda Aceh. The Al Jeezera TV crew were all set up. Fauziah Ibrahim the front woman was waiting to interview Danny and I. The back drop was a ship sitting restfully on the roof of a house, cast there by the Tsunami almost five years ago. 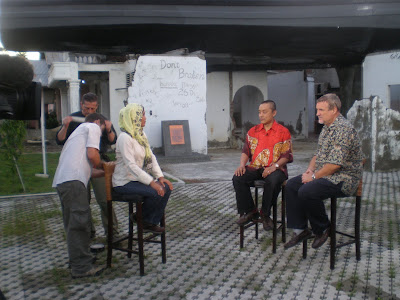 Fauziah getting wired up for the interview, Danny Hilman in the red shirt, and I on the right. Photo: Danny Hilman 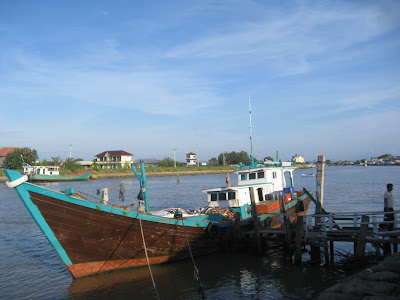 It was a tranquil scene this morning and hard to believe 170,000 people were killed and 100, 000 missing in Aceh. Photo: Bob McKerrow 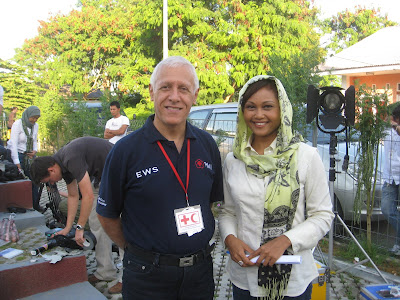 Ebrahim Faghihi head of our operation in Aceh with Fauziah Ibrahim this morning. Ebrahim and I worked in Afghanistan in 1995-96 and are enjoy working together again.

The 20 munute interview went well with Fauziah asking a few tough questions, but that's the way it's got to be. We are accountable for an unprecedented amount of public money from all around the world, and we have to be totally transparent and accountable. The interview will be shown on 26 December. 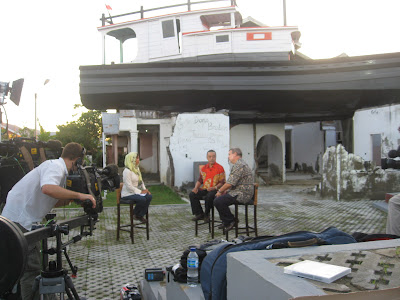 Fauziah interviewing Danny and I in front of the ship, left sitting on top of a house, after being carried 3 km by the Tsunami. 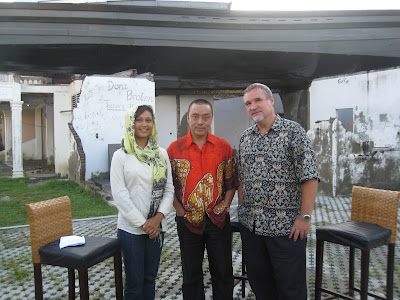 But where did that ship come behind us sitting on the roof of a house ?

They are ships that fell from the sky; two immovable objects, their very presence defying reason.

Banda Aceh residents call them acts of God. Most cannot fathom that the two ocean vessels were transported miles inland by flood waters of the 2004 tsunami that ravaged this small city on Sumatra’s northern tip.

Miles apart, both have been left intact as memorials to 170,000 residents of Aceh who were lost in the catastrophe.

Five years after the waters rose to biblical heights, the city continues to rebuild, erecting schools, clinics, roads and villages in coastal areas wiped clean by the invading ocean. It has been good to be a part of it and I thank the Red Cross for giving me this opportunity.
So many good memories. Some of my favourite photos below: 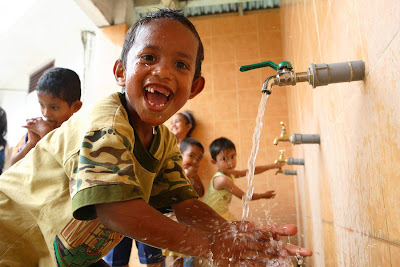 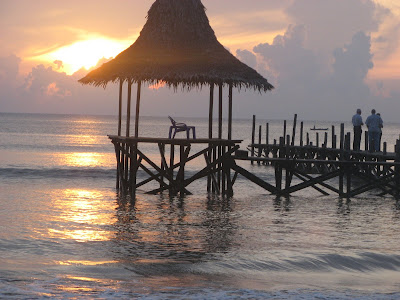 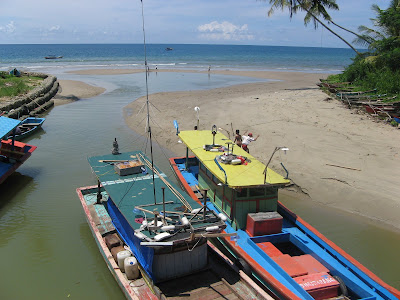 Good on you Bob,

Great to see the photos of what you are up to.

The photos especially of the fishing boats stir my memories of travels through Indonesia. The heat, the sea and the people.

The heat, the sea, the people. Lots of memories for both of us here.

Hello people want to express my satisfaction with this blog very creative and I really like the views of the focus very good indeed Thank you for the helpful information. I hope you keep up the good work on making your blog a success!

Generic Viagra is used in the treatment of Erectile Dysfunction (impotence), but it is not a cure. Impotence can be caused by a number of factors, either physical or psychological. Viagra can help maintain an erection but it will not stimulate arousal.Generic Viagra is a prescription drug, commonly used to help treat men having erectile dysfunction (ED) problems, also known as impotence. Generic Propecia comes in tablet form and should be taken only by men without liver problems. It should be taken regularly and needs to be taken with water - food is optional. Viagra contains Sildenafil and it is a prescription drug used to treat erectile dysfunction. Erectile dysfunction is the inability of the penis to become rigid, or stay firm long enough to complete the sexual act.Generic Cialis is the buzzword prescribed for all patients suffering from impotence. Generic Levitra is an FDA-approved oral medication to treat erectile dysfunction (ED) in men.

It was many years ago we first selected Top Restaurants in the U.S. See it. http://restaurants-us.com/oh/Warren/Blue%20Iris%20Cafe/44481/

What's up to every body, it's my first pay a quick visit of this webpage; this blog includes remarkable and
genuinely fine stuff in support of readers.
Here is my blog post ... cheap cigarettes

Remarkable! Its in fact amazing article, I have got much clear idea about from this paragraph.
my page :: cheap cigarettes

hi!,I really like your writing so much! proportion we keep up a correspondence extra about your article on
AOL? I need a specialist on this space to solve my problem.
Maybe that's you! Taking a look ahead to peer you.
Also visit my web-site :: direct download movies

At this time it sounds like BlogEngine is the preferred blogging platform
available right now. (from what I've read) Is that what you are using on your blog?
Take a look at my weblog : Free iphone 5

fantastic points altogether, you just gained a new reader.
What would you suggest in regards to your post that you simply made some days ago?
Any positive?
Look into my website clean my pc

Simply wish to say your article is as astounding.

The clarity for your post is simply nice
and i could think you're knowledgeable in this subject. Well with your permission allow me to grasp your feed to stay updated with impending post. Thanks a million and please carry on the gratifying work.
My homepage : learn piano

I am in fact pleased to read this web site posts which includes tons of
useful facts, thanks for providing these kinds of statistics.
Check out my web blog : Work from home

Usually I don't learn article on blogs, however I would like to say that this write-up very forced me to take a look at and do it! Your writing taste has been amazed me. Thanks, very great article.
My site ... how to make iphone apps

Can I post your submit to my wordpress blog? I will add a oneway link to your forum.
That’s one actually nice post.

Look into my web page - i'm having trouble getting pregnant

I always used to read post in news papers but now as I am a user of internet thus from now
I am using net for content, thanks to web.