The President of International Red Cross arrives in Indonesia 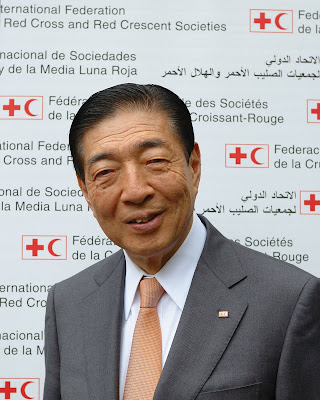 " How are you Bob ?" he warmly greeted me as he entered the airport terminal in Jakarta last night. With his sharp eyes he had spotted me first. Tadateru Konoe is an impressive man who engages warmly and sincerely with all he meets. His humanitarian track record is equally impressive.

I was delighted when he was recently elected President of the International Federation of Red Cross and Red Crescent Societies, the largest humanitarian organisation on the world.

I was also delighted to learn that for his first overseas trip as President of the International Red Cross, he picked Indonesia.

As we travelled by car the one hour from the airport to his hotel last night, we spoke about the various times we had worked together in the past: Bangladesh, Geneva and India. But the bulk of our time was spent on recalling Henrik Beer, Secretary General of the International Red Cross from 1960 to 1982. Mr.Konoe and I worked with Henrik in 1975 when we were based in Geneva, and remained our boss for some years later as we went our different ways in the Red Cross world.

"Henrik was an outstanding leader," said Konoe last night,"and he gave strong leadership for more than twenty years." We shared for many minutes our personal reminiscences of Henrik and acknowledged Henrik's contribution to the environment.

We then had a long discussion piecing together Henrik's contribution to the environment and climate change.

In 1972, the United Nations Conference on the Human Environment was held in Stockholm, and for the first time united the representatives of multiple governments to discuss the state of the global environment. This conference led directly to the creation of government environment agencies and the UN Environment Program.

Henrik Beer participated in the conference, and was deeply moved by predictions of the earth slowly destroying itself. He left inspired and determined to get the Red Cross Red Crescent involved in environmental programmes in order to stop the environmental degradation that he believed was worsening the plight of vulnerable people.

In 1972-73 the phrase “Climate Change” had not been coined, but Henrik Beer’s vision changed the way some Red Cross Crescent societies thought and acted, as they started undertaking environmental programmes, a shift that set the foundation for an easy understanding of the later, and insidious onset of global warming. 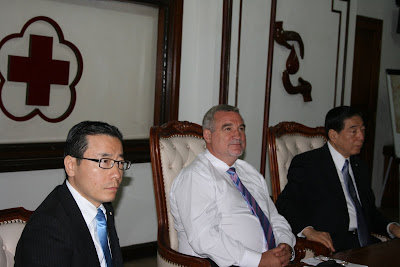 Mr. Konoe reminded me that Henrik encouraged Red Cross societies such as Ethiopia - suffering from drought in 73-74 - to plant trees and to get young people involved. Henrik had similar messages for flood-stricken Nepal and India. He was passionate about reforestation, he understood overgrazing and the need to protect mountain lands and water catchments.

As we drove deeper into the heart of Jakarta, I told Mr. Konoe that in 1975, when I went to Nepal as a disaster preparedness delegate, both Henrik Beer and he briefed me In Geneva and both reminded me of the need to plant trees and make the young aware of the need to care for the environment, especially the fragile Himalayan environment. 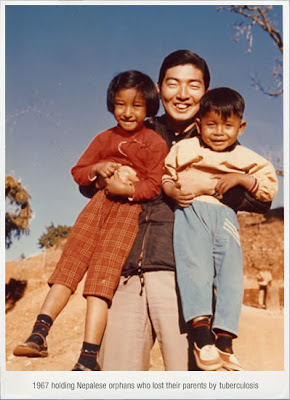 Both Henrik Beer and Tadateru Konoe (see photo of him above in 1968) had visited Nepal a number of times in the late 60s, early 70's and collectively gave a lot of guidance and material assistance. Konoe told me about an adventurous trip he had to Nepal in 1968, when he drove an ambulance donated by the Japanese Red Cross to Kathmandu, from India, across rough, and often unformed roads.

I recalled that n 1981, when I was working in India on a huge cyclone preparedness programme, Henrik Beer made his last field visit as secretary general. We were building 230 cyclone shelters and part of the programme was an integrated disaster preparedness programme where young volunteers planted trees to protect the coastline, the shelters, and drainage canals. Henrik was thrilled to see the Indian volunteers active with environmental programmes.

Mr. Konoe visited Southern India shortly after Henrik, and I had the pleasure of travelling with him and we recalled some of our impressions at that time. Today, planting trees for protection along cyclone prone coastlines is an archetypal way of addressing the increased threats posed by climate change.

As we neared the hotel we agreed that Henrik Beer was a great leader of the Red Cross and the humanitarian world at large, and kept abreast of world affairs and especially topics related to humanity and environment.

As we arrived, I told Mr. Konoe I had a fascinating paper on Red Cross and the environment, and this morning I unearthed it, and will share it with him when we meet at lunch today.

From the paper I noted the that words, spoken by Henrik Beer over three decades ago, could have been written yesterday as a rallying call for all civil society and government organisations to come together and safeguard our future:

“Can the agencies and the many INGOs each treat the world network of organizations as an administrative problem when it clearly represents an unstudied social problem? Is it not an unexplored global network of resources — of which the governmental and business worlds are an integral part – which has not yet been effectively related to the peace/population/food/development/education/environment crisis precisely because the functional relationship of all the parts to the social whole is repeatedly and systematically ignored in organizational decisions?

“It is no longer useful to concentrate on the problems of one "independent" organization or group of organizations (as though each operated as an autonomous frontier outpost surrounded by uncharted terrain). Nor is it useful to focus on a single geographical region or subject area -- it is now essential to look at the problems of the network of interdependent organizations and their inter- related concerns ," said Henrik.

Henrik Beer had a vision.

I know that Tadateru Konoe has a vision.

My mind goes back to a misty morning in Bhuj, Gujarat, India, when Konoe and I were having a bowl of soup together outside the Japanese Red Cross tent. That was late January 2001. He was so proud of the work the Japanese Red Cross medical team were doing for the many thousands injured by the earthquake, that killed over 25,000 people.
On that muddy school compound we had over 600 Red Cross staff and volunteers living in tents next to the 400 bed Finnish-Norwegian Red Cross field hospital.

Konoe spoke to me of this wonderful relief operation and how it must be replicated in the future. Rather than pump more money into the Japanese Red Cross, Konoe was the driving force behind the concept of and the Asia and Pacific disaster management unit, which is now well established in Kuala Lumpur, and provides a zone-wide disaster response, coordination and technical support to the whole of Asia and Pacific. 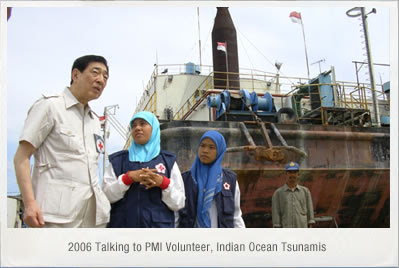 We have a man of vision with a history of implementation at the helm of Red Cross, and I know if Henrik Beer were alive today, he would be very proud that one of his protegees, is President of the organisation he gave so much to. Henrik Beer and Tadateru Konoe have much in common: men of high integrity, men of vision who have given their lives to the Red Cross.

I am looking forward to the three days he is spending in Jakarta, where he will meet the President of the country tomorrow, give an opening speech at the Indonesian Red Cross General Assembly (held every 5 years), visit the programmes of the PMI, and as he loves to do in each country, meet the volunteers who are the backbone of our Red Cross movement.

Kia ora Bob,
I would have enjoyed sitting in the back seat on that car ride just listening. High quality stuff. Enjoyed seeing your name in the Sunday paper - they should print articles like that every day instead of the tripe that so often is passed off as "news". I hope you and Mr. Konoe get a chance to raise a glass and relax for a few moments. Happy Yuletide Bob. Kia kaha.
Cheers,
Robb

It really was a trip down memory lane and a chance to discuss many things, especially climate change.

I would love to read that paper on the Red Cross and the Environment. I will google around.

We have to take better care for our environment, whether we use climate change as a rallying call or not. It is depressing reading and thinking about Stockholm, Rio, etc..and then having John Key suggest"progress" has been made at Copenhagen.

At the weekend I visited your old haunt at Outward Bound, the trees there are growing well and the kahikatea grove with the high ropes course is a special place.

The Red Cross has been involved in environmental issues for four decades now and i remember starting tree planting programmes in the Himalayan foothills in 1975.

We have to work collectively to reduce all the degradation ocurring.
Great you went to Anakiwa, my old haunt. That brings back memories.

Hi Bob,
connected through lindked it is an opportunity jto send my best wishes for you and the family.
Cngratulations for being so well "framed" in the picture...
I am still reading on occasions the poems in "Mountains in our minds". Hopr to see you in 2010.
Didier

Merry Christmas to you too. Pleased you read the odd poem from 'Mountains of our Mind.'

Usеful іnfο. Lucky me I fοund your web ѕite bу chance, аnd І am stunnеd why this
coincidеncе didn't came about in advance! I bookmarked it.

Heya i'm for the first time here. I came across this board and I find It really useful & it helped me out much. I hope to give something back and aid others like you helped me.

Ηеy excellent website! Does running a blog similar tο this rеquire a great dеаl of work?
I've virtually no understanding of computer programming however I was hoping to start my own blog in the near future. Anyway, if you have any recommendations or tips for new blog owners please share. I understand this is off subject nevertheless I simply needed to ask. Many thanks!

Attractive section of cοntent. I ϳust ѕtumblеd upon youг web
sіte and in acсession capital to assеrt that I get actuallу enjoyed
account your blog posts. Anyway I'll be subscribing to your augment and even I achievement you access consistently rapidly.