NZ involvement in torture in Afghanistan.

I have worked in too many conflict situations in Asia and Africa, seen and heard of the use of torture,  to believe the words of politicians such as  John Key's response to allegations that the New Zealand SAS are handing over prisoners to the Afghan secret police, where they are likely to be tortured?

My fellow blogger No Right Turn, an experienced analyist I respect says this:

"Mr Key said when New Zealand troops handed over someone they had detained they made sure that person would not be tortured later on.

+Where the New Zealand SAS worked alongside the unit in Kabul it was not the detaining force, Mr Key told NewstalkZB.

"This is simply bullshit. Kiwi soldiers are helping to capture these people. Therefore we bear moral responsibility for what happens to them. We cannot simply wipe our hands of that responsibility by drawing an arbitrary box around it and saying "not our problem", says Right Turn.

New Zealand is a better country than this. Our response to Afghan torture should be to protect people from it, not enable it. And if the SAS cannot serve in Afghanistan without colluding in torture, then they should not be there. It is that simple


So what is the background on this issue ? Questions have been raised about whether New Zealand's SAS may have handed over prisoners to an Afghan unit that is believed to use torture. 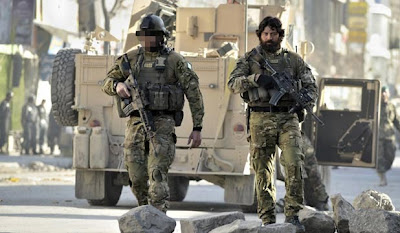 The British military has been banned from handing prisoners to the Afghan National Directorate of Security as it is so notorious for torture.

The Government has said the SAS worked with Afghanistan's Crisis Response Unit in Kabul, but was not directly responsible for any prisoners captured by the unit because it was not the head of the unit.

Prime Minister John Key said the SAS were not involved in torture of prisoners in Afghanistan.

If New Zealand troops detained someone there were clear written protocols about how that was done and those protocols honoured the Geneva Convention, he said.

The Geneva Convention sets out the standards for the humanitarian treatment of prisoners of war.

Mr Key said when New Zealand troops handed over someone they had detained they made sure that person would not be tortured later on.

Where the New Zealand SAS worked alongside the unit in Kabul it was not the detaining force, Mr Key told NewstalkZB.

However, the SAS recorded the name of every person detained by the unit and those names were freely available to international agencies, he said.

"It's likely some are [transferred to the Afghan National Directorate of Security], yes," he told the Sunday Star-Times.

He was understood to be looking into the situation.

Green Party MP Keith Locke said the New Zealand Defence Force had to share responsibility for what happened to insurgents it captured.
He supported the withdrawal of the SAS from Afghanistan.

"We don't want New Zealand's good name muddied by links for the torture of prisoners, which is reputed to include beatings, electric shock treatment, and sleep, food and water deprivation."

My fellow blogger No right turn at:
http://norightturn.blogspot.com/2010/08/keys-sophistry-on-afghan-torture.html
wrote this last Sunday :
"The Sunday Star-Times has a major news story this morning: the New Zealand SAS are turning over prisoners to the Afghan secret police. Those secret police are known torturers, who use amputations, electric shocks, sleep deprivation, starvation, beatings and burns to extract "confessions". So basically kiwi soldiers are turning people over to be tortured.


Our Defence Minister's response to this? The prisoners are "an Afghan responsibility". So he's basically washing his hands of the whole matter.


Fortunately, he can't. New Zealand has specific obligations under both international and domestic law to prevent torture and not turn people over in this way. The Convention Against Torture is pretty clear:


No State Party shall expel, return ("refouler") or extradite a person to another State where there are substantial grounds for believing that he would be in danger of being subjected to torture.


While phrased in terms of immigration law, its application is wider, and applies to any transfer of any form. Domestically, the Bill of Rights Act affirms that


Everyone has the right not to be subjected to torture or to cruel, degrading, or disproportionately severe treatment or punishment.


The government's obligation to uphold this right is not limited geographically; it applies to any act or omission by any branch of the New Zealand government, whether it is done in Wellington or Kabul. If the SAS turns people over to an organisation which uses torture, or assists in their capture so they may be turned over, then they are violating it. That's exactly what the UK High Court found, under an almost identical provision in the UK Human Rights Act, when they banned the British armed forces from transferring prisoners to the NDS facility in Kabul - the same facility the SAS are sending people to.


If the government won't do the decent thing here, and ban the SAS from transferring any prisoners, then we will have to make them. The Bill of Rights Act gives us one lever for doing so. Amnesty or some other human rights group should bring a case.


(Another option is a complaint to the Ombudsman. This has the advantage that it is free, and if taken up would likely have the same result. But it would hinge on the questions of whether a decision to turn someone over to torture was "a matter of administration", and on whether anyone other than a victim of such mistreatment had standing to complain. And it would need more information than is contained in the SST story to back it up. But if any human rights group can build a case, I'd urge them to pursue this avenue as well).
Posted by Bob McKerrow - Wayfarer at 21:08

Email ThisBlogThis!Share to TwitterShare to FacebookShare to Pinterest
Labels: Torture in Afghanistan by NZ

Bob: I took the photograph of the service blessing the Erebus DC-10 crash cross, and I am pretty sure that the two unidentified people in the picture are the US ambassador (Anne Martindell - sp.?) and, on the right-hand end of the group of people in the photo, the McMurdo Station head of the National Science Foundation. Keep up the good work. Very best wishes, Nigel Roberts (Sunday, 22 August 2010).

Oops, sorry, I scrolled too far and posted my comment in the wrong place! I've now put it under the correct story. Cheers.

Hey There. I found your blog the use of msn. This is
a very smartly written article. I will be sure to bookmark
it and return to learn extra of your helpful info. Thanks for the post.

I will definitely comeback.

These are truly impressive ideas in regarding blogging. You have
touched some pleasant factors here. Any way keep up wrinting.

If you would like to increase your familiarity
only keep visiting this site and be updated with the hottest information posted
here.

My web blog; how much should i weigh calculator

Generally I do not learn article on blogs, however I would like to say that this write-up very compelled me to
check out and do so! Your writing taste has been surprised me.
Thank you, very great article.

If some one wishes expert view on the topic of blogging then i advise him/her
to visit this web site, Keep up the nice work.