I have been in Sri Lanka a year now, and I am delighted with the progress of the Red Cross programme for people displaced by 25 years of conflict in the north and east. My colleague Mahieash Johnney wrote this article about our work. 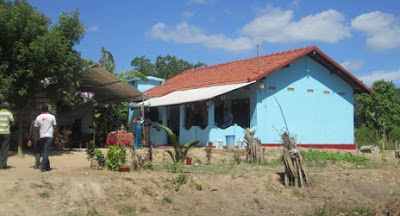 After six months, Murugaiya Aruldas has built his family a new home.
Walking into your own new house owned is a very special thing, and a momentous event for a family. The smell of fresh paint, polished floors, new curtains, and the celebrations that may accompany the move makes most think of this special moment in their lives.
Murugaiya Aruldas certainly understood that feeling as he walked into his new house in Ampalkulam, Kilinochchi last week. A house that was built by his own hands in a land where war ravaged for over 30 years. 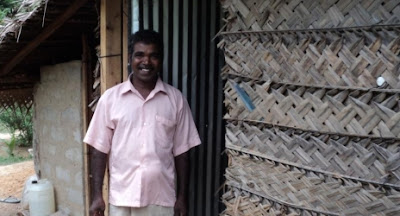 Previously the family has lived in a home made with coconut leaf.
Kilinochchi was known as the capital of the rebels during the war period and Aruldas was one of the victims who had to flee in order to save his family from the conflict. He is a father of three. He has two daughters and a son who is the youngest of his family. His eldest daughter is missing.
Post Conflict Recovery Programme

This programme is either primarily in support of people who were driven out by the conflict in Sri Lanka and have not yet returned home, or those in the process of resettlement. The program also provides support for host communities and those who have been displaced for longer periods. The initial primary target area for the programme is Kilinochchi and Mulativu districts.


In its initial stages, the programme will assist in the construction 2,000 houses in both Kilinochchi and Mulativu districts. 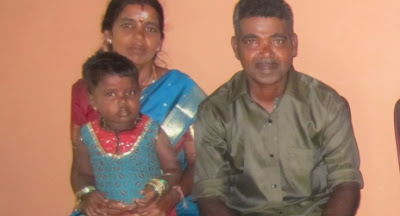 Murugaiya Aruldas with his wife and younger daughter. His older daughter is missing.
Action so far
Since the programme was launched in June 2010 – with funding from the German Red Cross – it has grown in scale and allowed the National Society to refine it operations, allowing it to provide more houses for more families.
At the same time the programme is supporting and working with the re-established Kilinochchi branch of the SLRCS. From its new Field Coordination Office in Vavuniya the SLRCS team, consisting of experienced former tsunami recovery staff, is managing the single biggest reconstruction effort on-going by any humanitarian organisation in Killinochchi and Mulativu.

So far 350 homes have been built and the project is on schedule to deliver houses for 2,000 families by its conclusion.

Aruldas’s house is one such completed project. On the day, he opened his house Red Cross Officials were invited for the ceremony.

Aruldas, sitting with his wife, says the end of the war offers the chance of a second life for his family. “Even though the war ended we were clueless as to what we are going to do with our lives. We knew we had to forge ahead,” he says. “The question was how are we to do that? It was then we heard about the Red Cross programme. They gave us our first payment in November 2010 and within six months I had managed to finish the construction of the house. After the final touches to the house today, we are moving into it. I am a happy man”

The success of the programme has been based on getting the beneficiary involved in the rebuilding process, where the beneficiary makes key decision on building the house.


“The programme has been such a success, due mainly to the fact that the Red Cross is engaging in a partnership with the beneficiary in order to rebuild their lives,” says Dr. Mahesh Gunasekara the senior coordinator of the programme. “Not only do we help the people to rebuild their houses, but we are providing them support in water and sanitation facilities, health and care and also on livelihood support.” 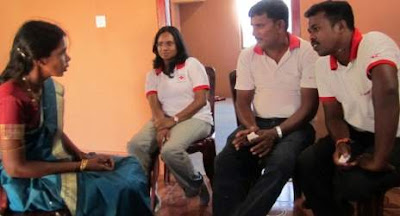 Red Cross staff and volunteers turned up to help mark the completion of the home building.
Looking ahead
Even though the programme is running smoothly, and supporting more than 20,000 people, the actual needs on the ground are greater than the Red Cross can provide.

The Director General of the SLRCS Tissa Abeywickrama says: “There are a lot of people in Kilinochchi and Mulativu that need help. Over 120,000 people need financial support. These people were battered by war, famine and very recently floods. We need to support more but it all comes down to our own financial constraints.”
Posted by Bob McKerrow - Wayfarer at 01:19

It is always awesome to check in here and see what has been going on in your work, or what you have been thinking about.

I hope the Red Cross can continue to improve the aftermath of the war in Sri Lanka.

Dear Jamie, I hope you big trip is going well.

The work the Red Cross is doing in Sri Lanka is awesome and every day another few houses go up, and displaced people have a home, water and sanitation, and improved livelihoods.